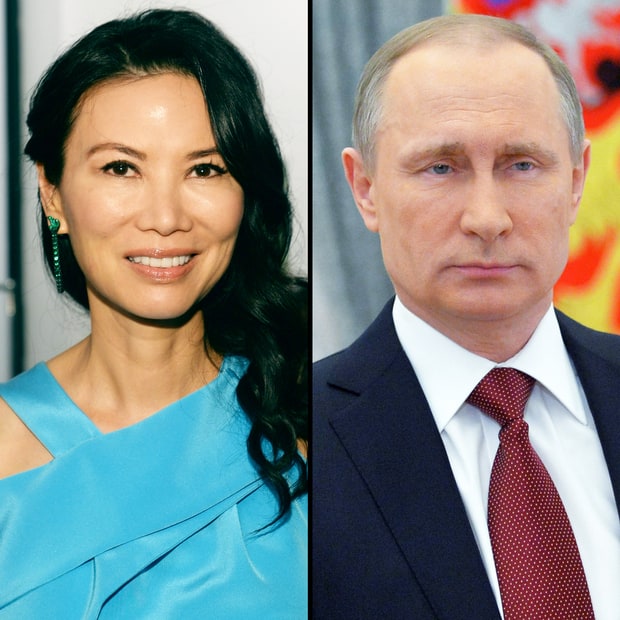 In case you’ve been avoiding the news this week, allow me to introduce you to Wendi Deng. You probably already know this, but Deng was married to Rupert Murdoch for the past 14 years until things sort of fell apart two years ago.  As we all know, Murdoch married Jerry Hall last week, so apparently Deng must have felt that it was her turn to bust a move, because bust a move she has. Deng is allegedly dating Vladimir Putin now.

How’s this for a new couple alert? The rumor circulating around the corridors of power — from Washington, D.C., to Europe and Asia — is that Vladimir Putin and Wendi Deng, Rupert Murdoch’s ex-wife, are dating. Reports of the pair have been floating around for years, ever since their respective divorces in 2014 and 2013. One insider close to the powerful leader tells Us Weekly the relationship is “serious.” The reality is, this surprises absolutely nobody. Deng has been a controversial figure from the getgo, especially among those who were close to Murdoch. Murdoch’s older children practically staged a revolt when Deng married Murdoch in 1999; she was 31 and he was 68. In the lead-up to that marriage, she had played the role of the young “homewrecker” mistress, that being the second time she had entered into a marriage (her third) by first obtaining mistress status.

Deng also had another relationship that caused shockwaves, and likely was the straw that broke the camel’s back when it came to her marriage to Murdoch. In 2014, Murdoch and Deng divorced rather quickly, and to many it seemed like Murdoch was pushing Deng out. As it turned out, he had some pretty solid intel that had exposed what turned out to be his wife’s cheating ways. The man in question? None other than former British Prime Minister Tony Blair. Vanity Fair covered the story at the time, which featured a handwritten note that Deng had written to herself that ultimately ended up being used against her in court.

The passionate note surfaced amid the flotsam of a shipwrecked marriage. It was written in broken English by a woman to herself, pouring out her love for a man called Tony. “Oh, shit, oh, shit,” she wrote. “Whatever why I’m so so missing Tony. Because he is so so charming and his clothes are so good. He has such good body and he has really really good legs Butt . . . And he is slim tall and good skin. Pierce blue eyes which I love. Love his eyes. Also I love his power on the stage . . . and what else and what else and what

You simply cannot make this stuff up. But if you think that’s good (and you would be right, it is), I’m happy to report to you that it’s doesn’t end there. There’s more from Vanity Fair.

The dénouement began with the backstairs rumblings of servants. Murdoch, 82, had long heard rumors that his 45-year-old wife was involved in extramarital affairs. But when those rumors grew to include too familiar a relationship with Blair, according to a former News Corp. employee in the U.K., “that was something that really took him aback.” After all, through the power of his British publications, Murdoch had virtually put Blair into office, and Blair had become not only a valued friend but also the godfather of Grace, the older of Rupert and Wendi’s two daughters. This is the kind of stuff that as a a gossip writer, you just sort of lie in wait for. You don’t have to spin it, you don’t have to embellish…you can just put it on paper and let the story speak for itself.

Wendi Deng appears to be a living, breathing example of that worst kind of female stereotype, setting back feminism (not to mention perpetuating negative stereotypes of Asian women) at least two decades.

However, Ms. Deng’s complete and utter lack of scruples, discretion, or apparent self respect is not lost on the general public. As head-shakingly unbelievable as it is, the Internet has stepped-up with an answer, as it so often does.

As for this whole Putin thing, US Weekly reports that the pair haven’t been spotted together…yet. At least, not as such.

Deng has yet to be spotted looking romantic with the Russian leader, but was seen boarding her pal Roman Abramovich’s yacht in St. Bart’s on Monday, March 28. Abramovich also happens to be friends with Putin. (According to the Daily Mail, the billionaire Chelsea Football Club owner reportedly gifted the president with a $35 million yacht in January.).

A gift of a 35 million yacht. Because, of course.