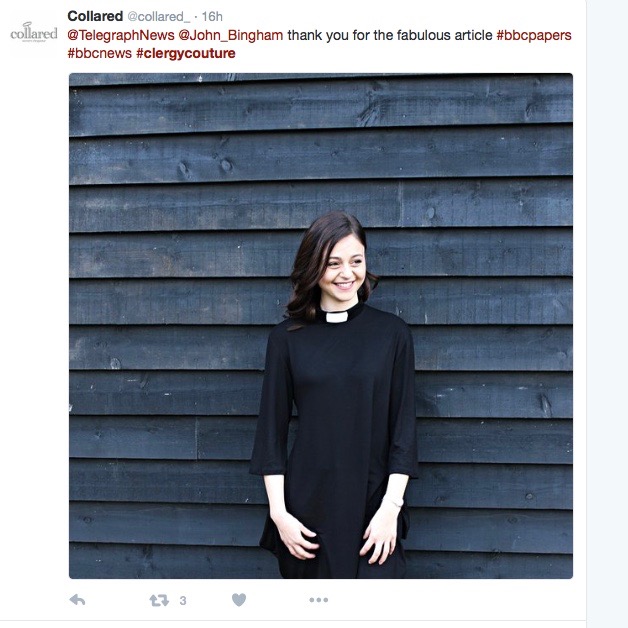 Things finally appear to be changing to keep up with the times within the world of the clergy in the United Kingdom. It’s been twenty-five years since women have been allowed to be ordained into the Church of England, and in the last eighteen months, we’ve seen our first female bishops. It’s official – female clergy are now no longer an oddity, and have joined the ranks of working professional clergy in the United Kingdom. While I would never go so far as to say that total equality has been achieved across the board, by and large, things finally  appear to be moving in the right direction within the UK.

However, there’s one area in which clergywomen were consistently being ignored – that of their professional attire. Luckily, it looks as if all that is about to change. Over the weekend, the UK publication The Telegraph ran a story about a new clothing line called Collared that is specifically geared-towards female members of the clergy.

The clothing line is the brainchild of the Rev Sandra Sykes, her friend Mandy Strevens, and their daughters Sarah and Melissa. Collared is an online boutique that caters expressly to female members of the clergy. The Telegraph reported on the details of the line’s mission.

Their new online boutique “Collared”, which specializes in day-to-day clothes for female clergy, made its debut last week at the Christian Resources Exhibition in London, a trade fair for all things ecclesiastical.

Church of England canons set out detailed instructions on the vestments clergy should wear while conducting services but say little about how they should dress in day-to-day ministry, other than that it should be something recognizable as a mark or sign of his (or her) “holy calling”.

That is almost universally interpreted by the wearing of clerical shirts and dog collars.

Stevens cites the fact that up until Collared, female members of the clergy were left to made due with the male version of a clerical shirt, which often left them feeling like a “man in drag.” 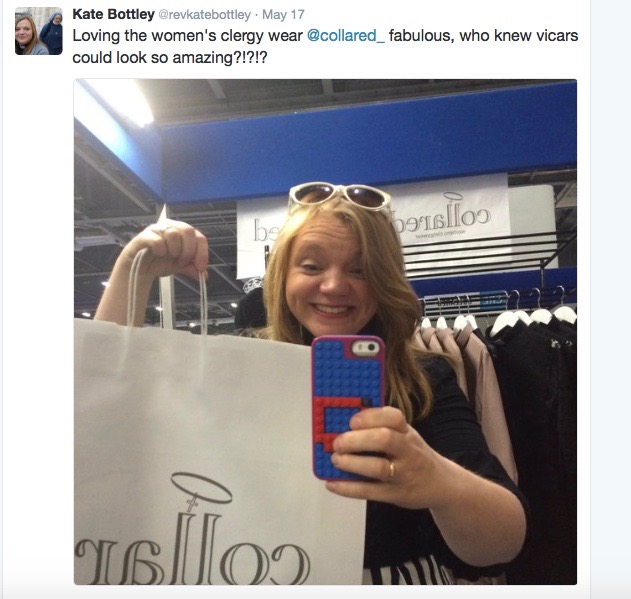 The line has already garnered national attention, and has a few high-profile fans. One of the first customers at the EcCel exhibition center, where the line recently made its debut, was the Rev Kate bottle, a young minister who also is one of the stars of the UK reality television program Gogglebox.

According to The Telegraph, the line is meant to be worn as “round the parish wear”, and in addition to being stylish, also puts comfort as a top priority. the collection is made up of simply-designed pieces, many which boast an almost mod, 60’s-like vibe with 3/4 sleeves, tunic styling, and even some geometric prints in the mix. The designers have lovingly dubbed their new line”clergy couture”, and by all accounts, it seems to reflect the modern lifestyle of today’s female members of the clergy. Mrs. Sykes explained to The Telegraph:

I do a lot of out-of-church ministry, I take services in the pub and at the beer festival. Women pushed the boundaries to start with and now the clothing needs to be pushed back to embrace the fact that women are in ministry too.

And the modern ethos doesn’t just end with the feminist twist on traditional clergy wear. The fabric itself of most of the garments seems to echo this sentiment of the UK clergy taking a step out of an archaic, paternalistic past and into the future.

Many of the tops are made mostly from cotton but with a small element – usually around five per cent – of Lycra. Melissa Strevens, Mandy’s daughter, laughs at the prospect of being responsible for what is almost certainly the first recorded example of clerical Lycras. “We will have to do a gym range,” she offers, only half joking. “We are already thinking about a maternity range, there is no maternity wear for the clergy at all at the moment.”

Interestingly enough, the line didn’t just go down swimmingly with the female members of the clergy; during the debut at the exhibition center, there were many enquiries from male members of the clergy as well. Mrs. Strevens told the Telegraph that the line “had lots of inquiries from make clergy too, especially the young guys. They just want something a bit more edgy.”

Personally, I think that if I were looking at a minister wearing a geometric print, a-line shift with 3/4 sleeves and a dog collar, or perhaps a skinny suit and collar in an embossed silk dupioni, I would probably spend a lot more time in church.