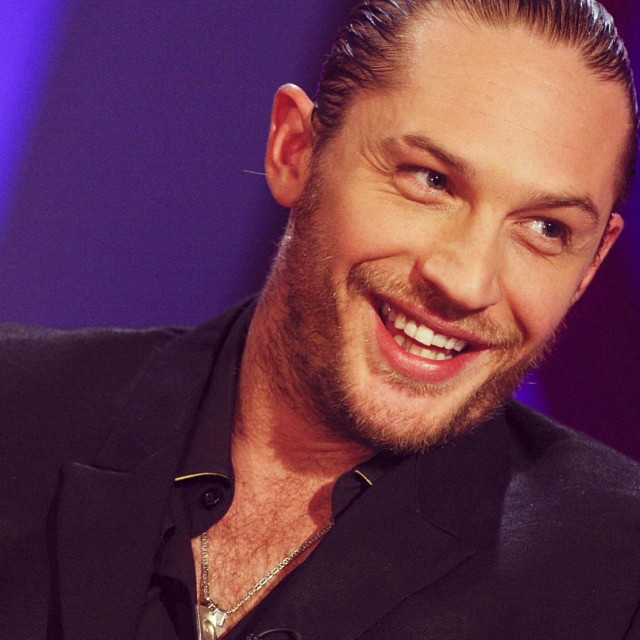 In case you’ve been living under a rock with no access to any sort of pop culture feed, you will already know that the film The Revenant is out right now, starring “King of the World” Leonardo DiCaprio, whose Oscar campaign is so try-hard it’s actually starting to make my back teeth hurt a little…like when you eat too much sugar. The film also stars Tom Hardy, whose presence on the red carpet has been much more low-key than that of his co-star. That said, if I had to be locked in an elevator during a power cut with one of these Revenant stars, I’d choose Hardy any day over Dicaprio… but that is neither here nor there. Elevators notwithstanding, Hardy has found himself in the news of late, after a series of reportedly sullen and, dare we say it, crybaby-esque press appearances while promoting the film. Hardy is sort of notorious for hating doing press junkets, but apparently a little over a week ago, his grumpy distaste and overall ennui for all things press-related reached an all-time high. Apparently Hardy pushed one member of the entertainment press a little too far, and he hit back in the most passive-aggressively modern way…on Twitter.

The journalist in question was Drew McWeeny, who apparently writes for the entertainment website HifFix. Here is what he had to say on Twitter after Hardy allegedly made reporters wait for hours for an interview, only to cancel.

I’ll say it: Tom Hardy should stop doing junkets. He’s terrible at them, and he makes it impossible for anyone to do their jobs. F**k him.

Tom Hardy could be set to play me in a movie, and I still wouldn’t interview him about it. Besides, his answers would all be, “Ghbbbbygy.”

I’ve seen Tom Hardy make publicists cry. He chose to take a nap during my scheduled time in Toronto. Today’s REVENANT junket was a joke.

No one HAS to do press or give interviews. But if you’re going to, don’t be a piece of sh*t about it. Thanks.

And, yeah, I considered not saying anything. But my time is worth something, and Tom Hardy is just an actor. No more tip-toeing.

Spoiled babies like Hardy count on the press needing access to them and staying quiet about how badly they behave. Dick move.

Needless to say, the gossip blogosphere instantly took the story and ran, and the internet nearly instantly divided into a Hardy – McWeeny battle. And yes, I know how that sounds. You may insert your own joke here.

Whoa there McWeeny. Them’s fightin’ words. And while I wholeheartedly agree that Hardy has a bit of a reputation for tending to act like a bit of a douche at press junkets (and from time to time, on set…allegedly, sources have reported that he has had on-set fisticuffs before with the likes of Paul Bettany, Shia Labeouf, and most recently, The Revenant’s director, Alejandro González Iñárritu).

But his alleged volatile nature didn’t stop him from feeling the need to address Twitter tirade in…you guessed it….an open letter that he published on his official fansite.

Thank you for your email offering to retract your misdirected anger. I apologize for any part of you having to wait for an interview and then not get one. The truth is we (as I was paired for all interviews that day) were unaware that ANYBODY was waiting. Or even went without a TV interview. Someone somewhere must have thought putting it on me was a lot easier than losing their journalist relations for the ongoing junkets and multiple movies that are pending. I wish I would have napped to be honest.

One note to make is that per Fox, they said they “never actually told (you) that the interview was cancelled, simply that they were running behind schedule.” They also said that “Drew chose not to wait and left. Had he stayed, he would have gotten his interview as planned.”

F–k.. Plot thickens … Who knows what to trust my friend, but I do know the cancellation was definitely not made by myself.

Resisting the urge to dare you to say what you “rant tweeted” so publicly, to my face next time we meet, which I doubt you have the balls to do; I want to apologise regardless on behalf of those that misled the both of us. That isn’t cool. At all. Neither were your tweets. But that’s by the by.

I appreciate your apology of sorts in your emails to and fro which I am happy to openly post. Also as I hope you understand now and which you’ve made very clear in our emails back and forth, your legitimate frustration lies with those who organised the junket; who fed you and I misinformation; not me.

Again apologies for the clusterfk. And it’s knock on effect to your personal life. I appreciate it is a busy time of year for you and your time shouldn’t have been wasted. I never had any intention of causing you any inconveniences at all.

Well now. There’s nothing like a good dose of “sorry, not sorry” to really sweeten the deal. While it sounds like maybe Hardy wasn’t completely at fault for the delays and missed interviews on the day, he also took the opportunity to poke the bear a few times, telling McWeeny he “doubted he had the balls” to address him to his face. Even if that is true (and it probably is), it’s unnecessary. But then, so was McWeeny’s rant.

Once again readers, my Trendelier senses are tingling with that unmistakable scent of rat. While Hardy may very well have been acting like a complete douche at the press junket and really did blow off a bunch of reporters, surely this isn’t the first time McWeeny has witnessed this from a celebrity. Why get your knickers in such a twist? We think that McWeeny, in lieu of his proper interview with Hardy, has decided to use the incident for gratuitous publicity, something that his continued insistence to keep talking about the incident on Twitter only confirms.

Here’s some truth for you: I have never exchanged any e-mails with Tom Hardy. Hmmmm. Guess we can keep those plot twists coming, huh?

The whole world is a schoolyard, and most of you, deep down at heart, side with the bullies.

Amidst all of this, I named “Mad Max: Fury Road” my second favorite film of the year. “Revenant” is in my Runners-up. Boy, I hold a grudge.

Hold a grudge? It would appear that you do Mr. McWeeny, because you’re still talking about it. From where I’m sitting, this looks like a war of verbal fisticuffs between two men who don’t hear the word “no” very often, and both have a need to be right – to have the last word. Gentle readers, let this be a lesson to us all – the opposite of love is not hate, it’s indifference. Agree to disagree and all that nonsense. Now here’s hoping that they will both just shut up and get on with the business of doing their jobs.

Although I hasten to add that what I said about being trapped in the elevator with Hardy still stands. Team Hardy, all day long.