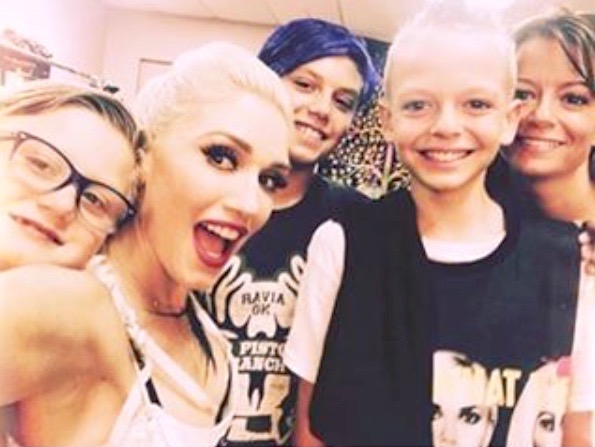 I spend a lot of time hurling disparaging remarks, casting aspersions, and engaging in all manner of unfounded assumptions when I’m writing gossip. Chiefly, because it’s gossip. I make no apologies for it, that’s my job. However, even we cold-hearted, soul-devoid gossip columnists need to balance things out every once in awhile, so today, in the spirit of balance and harmony, I’ve rounded-up three things that happened at the hands of celebrities that, past occurrences of douchebaggery notwithstanding, were actually kind of awesome. Highest honors this week go to Gwen Stefani, who managed to take time away from her very busy schedule of documenting perfectly natural Instagram shots of her perfect love with Blake Shelton to make one kid’s night the best ever. According to the Huffington Post, Stefani was onstage, in-between songs when she spotted a sign being held by an audience member that read “My son was bullied from first to fifth grade.”

Apparently the sign spoke to Stefani, because within minutes, she had the boy standing next to her on the stage.

The boy was clearly emotional standing beside Stefani, who proceeded to hold his hands up in the air, eliciting loud cheers from the crowd. The two also posed for photos and “The Voice” coach seemed to give the boy some solid words of encouragement. As I live and breathe, I never thought I’d see the day when I would be writing a post about Justin Bieber that didn’t involve an arrest warrant, a huge bag of weed, or an angry mob, but it appears that I am about to do just that. Or maybe it’s really his manager that I should be tipping my hat to. Either way, Bieber was allegedly offered a cool 5 million dollars to perform at the Republican National Convention, and he said no. Or someone said no. Huffington Post again had the story.

Bieber turned down $5 million from Republican Party donors to perform a 45-minute show at the venue near Quicken Loans Arena during the RNC in Cleveland, Ohio, according to TMZ. He wasn’t allowed to say anything disparaging about Trump or the GOP.

While the singer apparently initially considered it, manager Scooter Braun and label CAA thought it was “100 percent political” and pushed against it.

It has been rumored that perhaps Bieber is actually a Trump fan, founded in the rather shaky fact that he once liked an Instagram video that Trump posted. Okay, maybe that is a little shady, but before you break out into a cold sweat, it’s worth remembering that Bieber is actually Canadian, and therefore is unable to vote in this country. So even though this may have been a total interception on the part of Bieber’s manager, I’m going to go ahead and give it to the Biebs anyway, for actually listening to some sound advice. At the very least, it would be career suicide. I will admit however to feeling a little disappointed that subsequently there are no photographs of the reactions of ultra-conservative Tea Partiers as Bieber bumped and grinded his tattooed ass across an RNC stage. That’s the kind of stuff we gossip writers live for; but even that isn’t worth the risk of a Trump presidency, so never mind. Full marks go to Orlando Bloom for showing up to the Democratic National Convention and sitting in the audience to support his girlfriend, Katy Perry, as she performed her new single “Rise”, and later finished off the set with the crowd favorite “Roar”. He was captured on camera filming Perry on his iPhone, and we (and by “we” I of course mean the women of Earth) love him all the more for it. While to you and I this may seem like a perfectly normal thing to do and therefore not worthy of praise, remember that Bloom is a Hollywood star, and as such, activities such as taking a backseat to one’s girlfriend and not being the center of attention do not necessarily come naturally or without a price attached. If I had a nickel for every time I’ve written the whole “he couldn’t handle her success” narrative for an article I was writing, I could retire right this very minute. So, yes. Score one for feminism, in a roundabout sort of way. Orlando Bloom is a supportive and perhaps even selfless boyfriend who is able to engage in things outside of himself. When it comes to celebrities, this counts as a massive win.