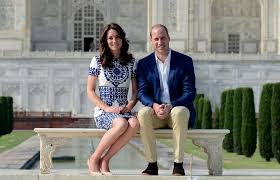 It seems the Duke and Duchess of Cambridge have been sprinting from one failed PR image repair-job to the next. They’ve been repeatedly called-out in the press for being lazy, they have been embroiled in a near-strike involving their domestic staff (in the wake of some threatened pay cuts), and the Duchess simply does not seem to be able to figure out how to style herself to prevent any of the numerous “wardrobe malfunctions” she seems to be repeatedly having, the latest of which nearly showed the population of India whether she favours bikini briefs or a thong. The couple was on an official visit to India last week…whatever that means…I guess maybe shaking hands with a lot of high-ranking dignitaries and reminiscing about the relationship forged between the two countries back in the “good old days” when Great Britain owned India. That should make for some interesting dinner conversation…”So, your eminence…do you find that ever since the emancipation, it’s been frightfully hard to find good kitchen help? The Duchess and I certainly struggle with keeping sour staff, to be sure…”

Anyway, this time, the less than favorable press is apparently India’s fault, and not that of the couple (wink, wink, nudge nudge). The royal couple’s handlers must have really, really wanted this visit to go well (especially in light of Prince Harry’s recent and extremely successful visit), because they invested a lot of time and energy into making it look like the visit went really well. Look, being the operative word here. Apparently aides to the royals were having a hissyfit because there was scaffolding over some of the Taj Mahal (*clutching pearls in shock and horror), and it would impede upon the aesthetics of the royal photo.

While they weren’t wrong (it does kind of make the photo look a bit strange), once again, those that are closest to the couple seem to be missing the point entirely about what it takes to create a successful visit (hint, more than a staged photo-op). They seem hell-bent on creating the look of a perfect visit with or without the actuality of it. It’s once again all fluff and no filler. This time, it appears as though they were dead-set on trying to reference the classic photo of Princess Diana taken in front of the Taj Mahal. As much as everyone loves a good royal photo, at this point, these people are fooling themselves if they think that one derivative photograph is going to make a nation (or the world) fall in love with a couple that have been slowly alienating themselves over the past few years. If it’s just a press photo-op chronicling their trip they needed, what’s the problem if there’s scaffolding!? I nave never in my life been on a trip to see ruins where there hasn’t been scaffolding. Hell, I live in Scotland, and there is scaffolding everywhere. It’s literally holding the country together. If there wasn’t scaffolding, half the country would come crumbling down between the weather and the relative age of the structures. Added to that, there exists this magical tool called Photoshop. They must think that would be “cheating, but it’s not like they would be altering the couple themselves…just a touch or a tweak here and there and that unwanted background stuff would be gone. Crikey, as a blogger, I photoshop out passers-by in the background of my shots all the time. Seriously, I just don’t get it. Here, here’s an example of what’s possible. See what I mean? The birds are a nice touch, aren’t they? Hitchcock would definitely approve.

So obsessed with creating the perfect image of a perfect royal visit were the couple’s handlers, that they (of course) managed to create a whole new news item along the way. Last week, The Guardian had reported that the British Foreign Office had called-ahead, wondering if Indian officials could take-down the scaffolding in time for the royal visit; a question to which they received an emphatic “no” as an answer (and a lot of negative press. Because, of course.) Actually, I believe the official response was something more along the lines of no, because removing the scaffolding would “undo months of hard work”, a story that the British Foreign Office categorically denies. Whatever. So the visit went-off as planed, the photo, as are so many of the couple’s photos, was awkward and strange (not exactly the Diana moment they were aiming for), and the couple’s handlers went back to shopping the press really hard-hitting stories of the couple’s’ visit, like the fact that Kate bought a pair of £7 earrings at a market stall and wore them twice (gasp), including for the awkward photo.

Wow. If that’s not relatability, I don’t know what is.