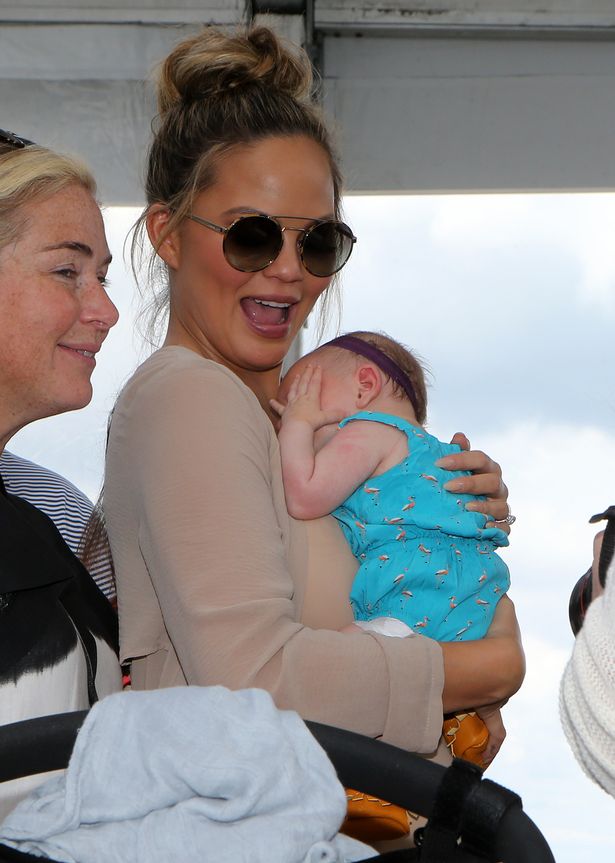 Chrissy Teigen has been my favorite internet Twitter and Instagram celebrity for the better part of two years now. She’s a very public figure married to another very public figure (Musician John Legend), yet manages to keep her social media feeds unfiltered, real, and unquestionably written by her and her alone.

As you may already be aware if you are even remotely following celebrity news and gossip, Teigen and Legend recently had a baby girl, who they named Luna. In the wake of Luna’s birth, Teigen has been very candid about many of the issues that new mothers face, many that are rather…um biological. While all new mothers feel an overwhelming sense of awe in the wake of the birth of their first child, there is another, darker side of motherhood that is a modern phemonemon – that of what I like to call the Sanctimonious Mothering Brigade, or “Sanctimommies” , in short.

Apparently Teigen had the audacity to actually go out to dinner with her husband on Saturday night, a mere two weeks after the birth of her daughter, and the Internet faction of the Sanctimony Brigade was not at all pleased. Page six covered the story.

Fan commentary was ruthless. One person barked, “She worried about showing off her snap back. She gone mess around and catch set back. Wow who do u really trust with your week old baby. Ain’t nothing that important that u have to go out.”

Another ranted, “The spotlight pull be strong. One week. Who wants to leave a one week old baby to go to a bar?

Sick and tired of the ridiculousness, when one person asked how the baby is doing, Tiegen sassily shot back, “I dunno I can’t find her.” Full marks to Teigen for standing up for herself (and other new mothers) by standing her ground. While some question why Teigen would even bother to “feed the trolls”, I think that her actions are to be applauded. I’m not sure at point society decided that women were not able to take time for themselves and still be good parents, but apparently the Sanctimony Brigade feels that these two areas of a woman’s life are mutually exclusive and she therefore has to choose between having a little time to decompress and unwind and being a good parent. Apparently any amount of personal freedom, no matter how short-lived, saps your ability to be an effective mother.

Which we all know is ludicrous. Thankfully, so does Chrissy Teigen.

Never one to shy away from an internet fight, Teigen not only got right in there and shut down the trolls, she did it in style. Thankfully, the voice of reason seems to be gaining the upper hand on this one…at least on the internet. The website Popsugar recently posted a very well-penned article about this very phenomenon titled “Shaming Chrissy Teigen For Her Postbaby Date Night Underscores What’s Wrong With America’s View on Mothering.”

Pretty much says it all, doesn’t it?

The article has some very keen observations on the new social order when it comes to the modern take on parenting, and if you happen to be the parent who has retained that second X chromosome…look out, because the Sanctimony Brigade is coming for you.

American society expects mothers to be martyrs rather than women — to give at all costs and be happy to do so. But the inevitable result of nonstop giving without any reciprocal getting is that we run out of things to give. When our neglected marriages crumble and our own needs are so long abandoned we become hollow and bitter, we’re clearly not in the best place to administer good mothering.

Hollow and bitter. Sounds about right, doesn’t it? So hollow and bitter that you might even spend your free time trolling the internet looking for celebrities who are under-performing as parents according to your world view, and calling them out. At a time when the government is trying to take away a woman’s right to make decisions about her own body, you would think women would unite in sisterhood to at least support one another’s right to make individual decisions on how to mother — and yet we instead too often see another mother’s choices as a way for her to be wrong.

Thankfully, Teigen is very able to speak for herself. Her actions remind us that not only is it okay to take a little time out for yourself after you have given birth, it is the responsible thing to do. The thing any good parent ought to do.