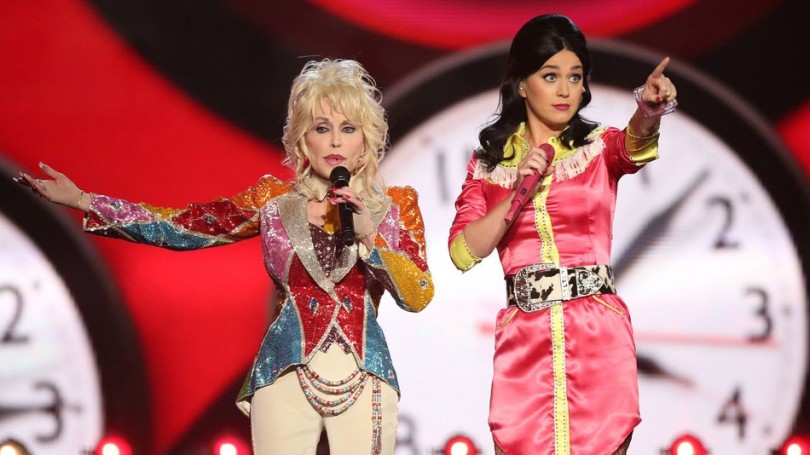 The Academy of Country Music (ACM) recently held their annual awards ceremony, and as one would expect, celebrities turned-out in droves for the event. What does one wear to a country music awards ceremony? That’s an excellent question. The attendees seemed to run the gamut this year, from sublime to ridiculous. Here is but a smattering of who wore what. Prepare yourselves. Some of these are real belters. Speaking of belters, nothing says country and western like the battle cry of a giant rhinestone belt buckle. Or pink, cow-print cowgirl boots. Or a pink midriff top paired with a skin-tight blue lamé fringed leather skirt and matching biker jacket (!?). I didn’t think it was possible, but Katy Perry may very well have covered all three categories (good, bad, & ugly) all in one fell swoop with this Jeremy Scott Couture look (Couture!? Really!?). It’s good because, let’s face it, she has a certain electro-Barbie sartorial reputation to uphold. She also tok the stage with Dolly Parton, whose whole ethos would very much approve of this look (“it takes a lot of money to look this cheap” Parton always says). It’s bad because…well…look at it, and ugly? I think it’s safe to say that one doesn’t need any preamble. But still; Perry takes no prisoners, makes no apologies, and pulls it off. It seems that Tom Hiddleston took a break from his busy schedule of being the weatherman at FOX32 news in Chicago to present the Entertainer of the Year Award at the ACMs; the award went to Jason Aldean. I’m pleased to report that he has not lost any ground with his suit game at all.

For the second time this week, I find myself writing the words, this man really can wear a suit. While the very English tailored dapper grey jacket may have seemed a bit out of place on a backdrop of the very American art form of country music, the actor acknowledged it, yet made no apologies.

As an Englishman and an actor, I feel very much like a guest tonight but my God, you guys know how to have fun, thank you. Nicole Kidman gets full marks for choosing something really interesting. Ironically, I don’t know if I actually like it all that much on her, but I appreciate it for the piece of art and craftsmanship that it is.

The dress is by Alexander McQueen, and as you can see by the photo of the dress in its original permutation on the runway, it takes full advantage of one of the new season’s biggest trends – sheerness. In fact, it takes advantage of sheerness to a fault, actually. I think in the photo on the left, if you squint your eyes just right, you are just able to make out the model’s…erm… Southern Hemisphere…yikes!

Kidman smartly opted for a bit more coverage underneath the dress that the original runway dress provided. Unfortunately, the result is that it perhaps takes a little of the impact of the gown away. Perhaps if Kidman had opted for a flesh-toned slip underneath it would have had more of the impact of the original runway piece. Then again, maybe not. Be that as it may, while the piece is definitely busy, it is beautiful in it’s way, although I would love to see it on a woman with a few more curves. Tom Hiddleston had a little competition in the “wearing the daylights out of a tailored suit” category in the form of Tim McGraw. McGraw looked like what might happen if James Bond parachuted out of a crashing helicopter and pulled the ripcord just in time to be gently lowered into a pair of Tony Llama cowboy boots and a 10-gallon black Stetson. However, despite his suave-as-anything sartorial choices on the evening, it was McGraw’s performance that is being touted as the show-stopper of the evening.  Here is what HollywoodLife.com had to say about the singer’s turn on the stage.

The members of the audience at the MGM Grand Garden set the mood with their own hand-held lighters as the arena went dark to showcase Tim, as sat on a stool in the middle of the audience singing the heartfelt lyrics. You could just taste the emotion in the arena, as he poured his heart into the moving message, wearing his usual black cowboy hat.

And yes, the had did get a mention, which I think is only fair. It’ a pretty impressive hat. While we’re at it, let’s have a quick look of appreciation at McGraw’s wife of 19 years, mega-star in her own right Faith Hill.  Hill wore a very 60s-inspired “suit” look of a fitted, cream double-breasted jacket and culottes. While the look shouldn’t have worked for a red carpet for a variety of reasons, it did work, likely due to Hill’s impeccable styling. Her look was also undoubtedly aided by the suitably pared-down allure of her husband’s look. With her hair in a simple topknot and no accessories save a pair of classic pearls adorning her ears, the look was clean, light, and a breath of spring in a sea of heavily-styled attendees.