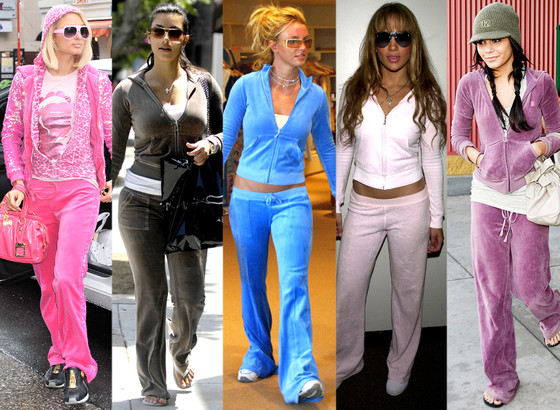 Listen up fashion lovers, the worst possible thing ever in the history of all sartorial offences is going down right now, under our noses. For reasons I cannot even imagine unless they contain such phraseology as “we have been smoking crack since we woke up last Saturday morning”, the fashion powers that be have decided to bring back the velour track suit.

I don’t know how I could have missed it at the time, but Vogue magazine online did a piece about this very thing back in January. The article’s author, Leana Satenstein, was no less stunned than I am now, and described to us one of the most illustrative images of what the velour track suit represents that I’ve ever read.

At first, I was shocked when I discovered my colleagues had been wearing the piece in public. I hadn’t seen nary a velour zip-up or tie-waist pant since my early college years, when hungover hordes of sorority girls would shroud themselves in supple two-pieces and venture outside in search of a greasy bacon-egg-and-cheese. I hadn’t really even laid eyes on a full-on tracksuit since 2001-era Paris Hilton, the infamous clubbing heiress as likely to be seen in bubblegum pink velour and spray-tanned midriff as not. And who could forget early-’00s-era Britney Spears, who accessorized her baby blue tracksuit with a Starbucks Trenta of iced coffee? A saccharine vestige of the early millennium, the “trashionista” staple came to symbolize ditzy doofuses with bloated credit cards ripe for a little good-natured ribbing See? Yes. That. Exactly that.

According to Vogue, this time it’s totally different. Citing a new “bad-taste-meets-good-taste movement, one of Vogue’s Market Assistants is emphatic about the fact that, upon correctly donning such an iconic item as the dreaded Juicy Couture sweatsuit in the year 2016, you are not just wearing a tatty piece of early naughties fashion history that most women would rather forget, you are actually on the cutting edge of a movement.

Right now you can echo a high-low sort of attitude with the Juicy tracksuit. You can offset its casual aesthetic with a funky shoe or elevate it with a great sweater. It’s about mixing and matching and not fully diving into the throwback look.

There it is. She actually named that which has basically been the fashion equivalent of Voldemort (He Who Shall Not Be Named) for the past decade – The Juicy Couture Track Suit. I’ll give you a moment to meditate on that so that you can remember all of your highbrow early 2000s velour track suit looks with unwashed hair in a topknot and a pair of flip flops. Full makeup though…of course. Because we’re not barbarians.

And what of this supposed high-low mixing that we are always hearing so much about in the fashion world.  How does it apply to Juicy Couture? Does that even work!? Look, I’m all about mixing my thrift store finds with my designer pieces and all of the other things I’ve found in-between. But somehow, this is different. This is putting an apple in with the oranges. We’re talking about the fashion equivalent of mixing blood types, or bringing dirt from Mars and casually tossing it into the Great Lakes. This is like writing a computer program meant to crash an operating system and then expecting it to work on an alien spacecraft with alien software, the likes of which our technology has never seen…okay, that last one was actually the plot of the movie Independence Day, but you get the idea. It would never work. If, like me, you’re wondering where anyone could even obtain a Juicy Couture sweatsuit in the year 2016 (you’re not, are you?), I went and researched it a bit. Being a fashion writer, I had sort of heard through various sources that the company was on the ropes for quite some time. But I also know for a fact that they are still out there, because theist time I was in Florida, I saw some at Kohls. Yes, Kohls – the discount emporium. And I checked their online site just now, and they are still there, on sale for 30 bucks, reduced from $60. Don’t you dare run out and buy one. Don’t. You. Dare. Okay, maybe just one.

Between 2003 and 2009, company founders Gela Nash-Taylor and Pamela Skaist-Levy built the company from a start-up with only $200 to its name to a whopping $51 million enterprise. That’s a lot of velour and rhinestones. The company was one of the first of the era to really jump on the bandwagon of gifting their product to celebrities, ensuring that their merchandise was featured in many of the pap strolls and coffee runs taken by the Hollywood Celebutantes of the era. The brand’s accessibility was such that they grew exponentially, yet ironically it was likely this very accessibility that ultimately caused such a rapid decline in popularity.

But according to Vogue, all you need to do to make this into “fashion” again ‘s change your shoes or add a really nice sweater to “elevate” the look, thereby instantly making the public forget that you are in fact wearing a pair of Velour track pants with your $1,200 Celine sweater, a look that invariably says “the kid next to me on the plane threw up in my lap and I had to throw my jeans into the tiny waste bin in the airplane toilet and all I had in my carry-on were these velour track pants.”

Will they look less like velour track pants on a background of a Celine sweater or a pair of Gucci brogues? I doubt it Vogue…I doubt it. As an old wise man once said to me, “you cannot polish bird droppings, and it’s best that you don’t try”.

Okay, I just made that up.