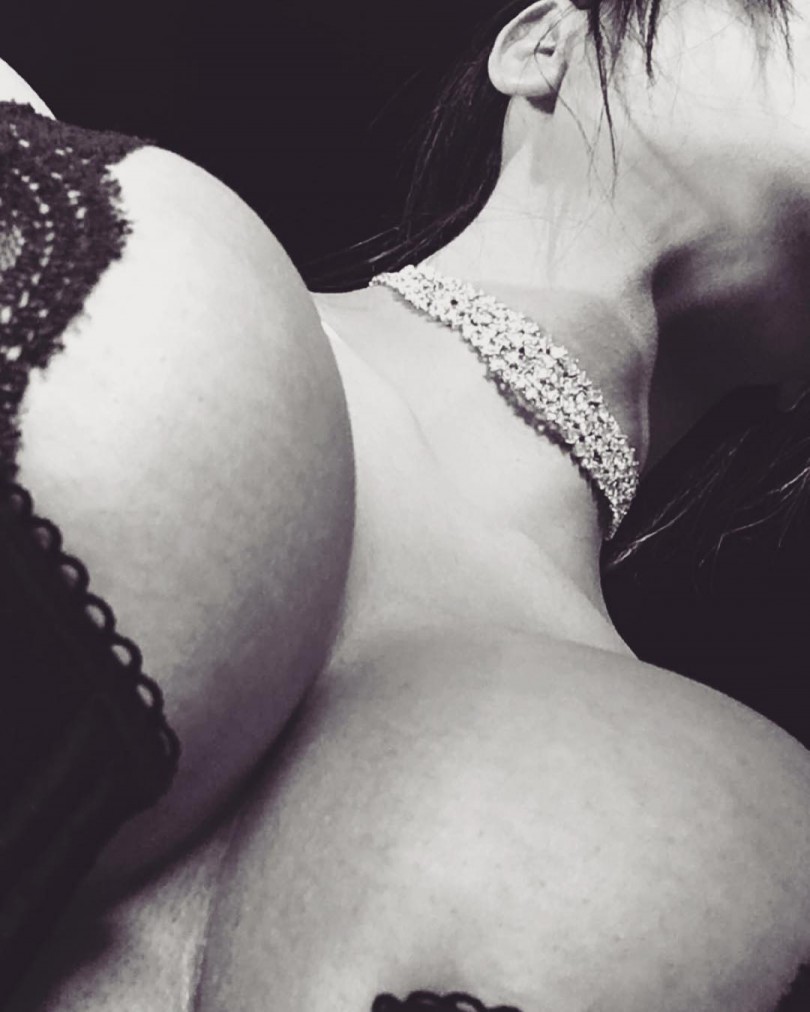 You know how at every wedding, there’s that one guest…the one that needs all the attention, who dresses like she is going to bondage-themed nightclub, and spends the evening getting drunk and flirting with all of the 15 year-old boys and falling out of her dress and sitting on your great uncle Merle’s lap, much to the consternation of Merle’s wife Esther? You know that guest…she’s that guest. Well ladies and gentlemen, that guest has a name, and her name is Kim Kardashian-West.

Over the weekend, Kimye attended a wedding in Miami wearing a Wonderbra, some Spanx, and a satin negligee 40 sizes too small stretched over the top of both. There are so many reasons why this is wrong. While yes, tradition dictates that unless instructed otherwise, you don’t wear white to a wedding (white is for the bride), equally black is considered to be too somber a “color” (or lack of color, more accurately) for a wedding. And yes, while these days, these rules are about as loose as they could possibly be (many people wear white and black to weddings, and manage to pull it off), this…this is not one of those times.

As they say with so many things in life, it’s really the intent that is the important factor here. The color of the dress is less important than the intent behind it’s deployment for this particular occasion. Clearly Kimye are seeing the nuptials of their dear friend (at least I hope it was a dear friend, or someone is gonna be pissed-off…) as an opportunity to self-promote and up the sexy in the name of  their “brand” (raise your hand if you’re sick to death of hearing the word “brand” used in this way…yeah, I thought so.)

How can I be so sure that this is the case?

Number one: look at the dress. Actually, it’s not so much a dress as it is lingerie. While apparently the other wedding guests were also attired in looks that were more nightclub than altar (it’s a Miami thing), Kimye’s look was by far the hands-down winner.

Two: look at how the pair of them were carrying-on was the event. But be warned, if you are eating while reading this, you should stop. This will make you throw up a little in the back of your mouth. Claaaassy. Can’t you just picture KK sitting in the church pew with a hollowed-out bible containing her iPhone, pretending to follow the ceremony and sing hymns and whatnot while she is secretly taking boobie pics for the internet? I can totally see that – and as it turns out, now the rest of the world can too. These photos were posted to Kim’s Instagram account not long after the wedding, and they are basically photographic fodder of the Cinemax After Dark variety. Oh..except that they’re in black and white, so I guess that actually makes them arty. This will have been Kanye’s idea, he’s an artistic genius. Just ask him. Oh wait…except it looks like he’s kind of busy right now (or maybe asleep, its hard to tell). It’s okay. I’ve seen this film before. This shouldn’t take long. This scene is going to be over in about two minutes. Let’s go get some ice cream while we wait… Hmmm. Okay, maybe not. Whatever. I didn’t need the calories anyway. Plus, I don’t have free access to a lifetime supply of Spanx the way some people do, so it’s just as well. I’ll just have another vodka tonic instead.

Meanwhile, as a diversionary strategy from the horror show that you are now inevitably seeing every time you close your eyes, let’s just talk about that necklace that Kim is wearing in the photos. Apparently that necklace was her “push present”…meaning the gift that she wanted (and got) from Kanye for squeezing-out Kardashispawn No. 2. It’s a full-on, no-foolin’ diamond choker (why always with the 90s-era chokers, Kim?), and it cost a million dollars.

You may pause here if you like, raise your pinky up to the corner of your mouth, and say “one million dollars” in your best Dr. Evil voice. It’s okay, I did it too.

However, let us not forget that Kanye is having some pretty serious money troubles. His Yeezy fashion empire is basically haemorrhaging cash, and it is reported that the self-proclaimed musical genius is at least 10 million….10 million dollars in debt. It’s no small wonder really. Have you seen the Yeezy fashion line? Think of it as the fashion line from the first Zoolander movie, “Derelicte”, then take away the funny bits and talent and charisma of Ben stiller and Will Ferrell, and you’re basically left with Yeezy. It makes me wonder of maybe Kim actually bought that necklace for herself, slipped it under Kanye’s pillow, and he awoke thinking that the genius fairies had answered his prayer.

If that be the case, I hope she has at least six more where those came from. She’s gonna need them.