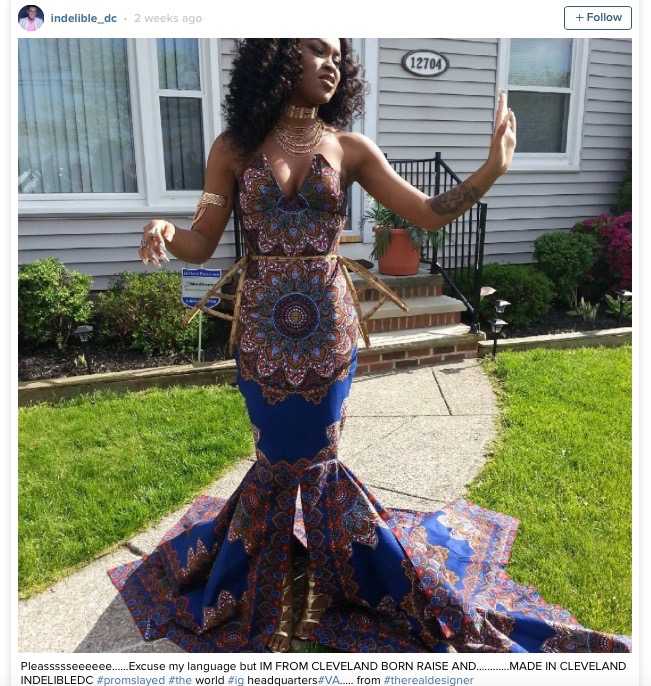 When Makalaya Zanders decided to get a custom prom dress made for her for this year’s prom, she couldn’t have predicted the impact that the dress would have on her life. The back story is as follows; Zanders mentioned to a school administrator (who just happened to be white) that she was hoping to wear an African print dress to the prom, to which the administrator retorted that such a garment would be “tacky”, and that African print “really isn’t something that you wear” to a formal event such as prom.

Understandably, Zanders was knocked-back a bit by the utterly tone-deaf and insensitive words of this school administrator. Racism comes in many shapes and forms, and I simply can’t imagine how even at the time, this administrator didn’t actually stop and consider the implications of those words, or more importantly, what they actually imply as far as how he or she sees and treats the African-American students in his or her charge. But more on that in a minute.

The important thing here is that Zanders did not let one small-minded, not-so-covertly racist person stop her from achieving her dream of wearing an African print dress to her prom. Instead, Zanders enlisted the help of designer DeAndre Crenshaw to help make her vision a reality. Crenshaw is a Cleveland designer who owns a line of clothing called Indelible Couture, and he wasted absolutely no time in creating an absolutely stunning Ankara print dress for Zanders, which I hasten to add, fits her better than a lot of celebrity red carpet gowns I have seen in recent times. Zanders posted her story and photographs on her Instagram account (which has since been made private), and her dress and story instantly became a viral internet sensation. It is undeniable that the dress is exquisite, but equally Zanders’ deft accessorising with a unique gold belt, necklace, and bracelet on her upper arm add to the effect. She looked like a queen; sophisticated and regal, and her date complemented her look perfectly in a fitted blue slimline suit, monochromatic tie, and blue (suede?) shoes.

Teen Vogue recently covered the story, and spoke with a woman named Charlene Dunbar, who designs for an African-inspired  line of clothing called Suakoko Betty. Dunbar had some informative words on the matter.

I can’t name another fabric that carries as much style and cultural significance as Ankara. It’s become an institution, loaded with identity and celebration of African culture for women worldwide. Ankara has always been significant to local African culture, and recently it’s grown to be a universal symbol of the design brilliance and the rich culture of Africa. Ankara has stepped onto the world stage and people are starting to take notice.

The school administrator has since apologised to Dunbar, but only in the wake of the dress going viral in the internet. What is perhaps most puzzling about this whole thing is that a member of the school’s staff wold feel it appropriate to comment on a student’s choice of dress in such a way at all, let alone not pause to think about the inherent racism that is embedded within the comment. While there are certainly no shortage of stories floating around out there about people policing women’ wardrobes, at prom or otherwise, I am a bit unclear why this administrator thought it appropriate to comment on a teenager’s dream dress as “tacky”, sight unseen. I’ve tried to put myself in the shoes of this administrator, and simply can’t imagine a situation where a student would be excitedly telling me about a “dream dress” that she wants to wear to her prom, and to then reply to her enthusiasm for her prom vision as “tacky” and “not appropriate”. I can’t help but think that someone who is this quick at the negative trigger finger is not perhaps  well-suited  to be working in education at all.

Be that as it may, Zanders has made her point, and made it well. In fact, I would go so far as to say that she actually took a school mentor’s negative comments and turned them into one of the most perfect fashion mic-drop moments of 2016.

My dress was to make a point. That African style is beautiful. That I am comfortable with my Melanin and roots. And finally that there’s nothing like Black girl Magic.