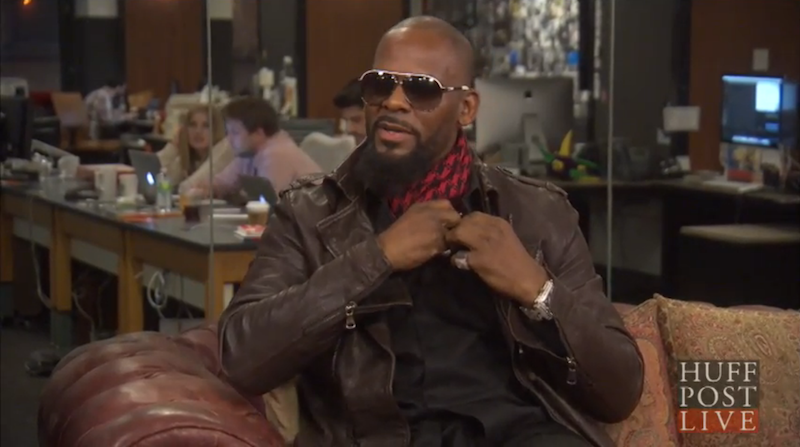 R. Kelly Can’t Keep His Hand to Himself

One person who never keeps his hands to himself is R Kelly. Kelly didn’t want to face questions about his past history of sexually assaulting minors, so he walked out of a Huffington Post Live interview on Monday. The R&B singer threw a fit when Caroline Modarressy-Tehrani suggested that his lagging album sales had something to do with the accusations. The interviewer had read him a Tweet from a fan who was conflicted about his past. When asked to respond, Kelly said “I say f*** that.” He told Tehrani that his fans obviously loved him and complained, “I did not come here to be interrogated, I didn’t come here for a deposition. Do you know what a deposition is? … This is a deposition … This is about disrespect.” Kelly knows exactly what a deposition is… because he’s been sued so many times! Kelly has faced more than two dozen lawsuits over the last 20 years for his propensity to assault young girls. Two videotapes were made public showing him urinating on underage girls. On the tapes, Kelly pees in their mouths and orders them to call him daddy. Although a jury found Kelly committed no crime by having sex and peeing on the girls, the videos still condemn the singer. In 2013 former Chicago Sun-Times reporter Jim DeRogatis reignited the controversy by interviewing hundreds of people about Kelly’s history as a predator. DeRogatis reported that Kelly hung out at high schools where he met up with teen girls and had sex with them. Of course, there had long been whispers about Kelly’s behavior, since he married the singer Aaliyah when she was only 14 years old, forging her birth certificate to say she was really 18 at the time. But reporters deliberately minimized or ignored what was happening with Kelly. Since then, Kelly has settled dozens of lawsuits by teen girls who he exploited. Kelly always takes it one step further by writing songs like “Trapped in the Closet” and “Sexasaurus.” Modarressy-Tehrani did what any sensible journalist should do every time they have to interview Kelly – ask him about why he sexually assaults children.

Selena Gomez Has Her Own Advice for “Keep Your Hands to Yourself.”

Selena Gomez has released the video for her steamy new song, “Keep Your Hands to Yourself.” The former tween star romps through the video with model Chris Mason. Much of the video shows Selena, in nothing but a bra and panties, rolling around on the bed touching herself while a video of Mason plays on a television. The two kiss all over each other, but only in Selena’s mind! The video ends with the police arresting Selena because she was stalking Mason and had broken into his house. Okay, we know this is bound to get everyone talking, including ex Justin Bieber and current boyfriend Niall Horan, but the video is actually pretty icky. Is stalking, breaking, and entering sexy when a woman does it to a man? Well, I guess we can turn to R. Kelly for that advice, right?

Gavin Rossdale, who has been laying low while his ex-wife parties with Blake Shelton, finally returned to Twitter over the weekend. Rossdale posted a picture of himself with three friends having fun at a Seattle Seahawks football game. Rossdale has been in hiding since it was revealed he couldn’t keep his hands to himself around the nanny. However, his return to public life is underwhelming. He was watching the Seahawks play the hapless Cleveland Browns, after all, which is not exactly like getting tickets to the Super Bowl. Let’s just say Stefani is still winning the PR war!

Actress, DJ, and professional starfu*ker Ruby Rose didn’t wait too long before moving on from her ex-fiance Phoebe Dahl. Rose, who has been engaged four times but never married, showed up to lunch and the movies with singer Halsey. The two arrived wearing matching jackets and baseball caps. Halsey collaborated with Justin Bieber on his new album. The 21 year old singer once described her sexuality as tri-bi, meaning biracial, bisexual and bipolar. Sounds like a special snowflake to us!

Keep the Crown to Yourself!

When is it better not to win Miss Universe? When you’re mistakenly crowned the winner despite only being the first runner up! On Sunday, host Steve Harvey accidentally announced that Miss Columbia had won the pageant. But Miss Philippines was the real winner, and Harvey had to take back the crown! Actually, Miss Philippines is the one who plucked the crown right off the head of Miss Columbia and she did not look apologetic when doing it!

After the pageant the other Latina contestants, like Miss Mexico, Miss Costa Rica, and Miss Puerto Rico, swarmed Miss Columbia to offer their support and condolences. The women didn’t blame Harvey, instead they went after Miss Philippines, even though she technically had nothing to do with mistake, which was probably caused by a cue card. Pageant insiders say there has long been a brutal rivalry between Filipino and Columbian beauty pageant contestants. Maybe that’s why Miss Philippines was so callous in the way she stole the crown.

However, the real winner of Miss Universe is clearly Miss Columbia, who has been featured on newscasts all over the world, with people offering their sympathy and support. Reporters are more desperate to land the first interview with the runner up than they are the winner. Praise is also pouring in for Miss Columbia, with everyone saying she handled herself in a classy way. Interviewed backstage, she said “[e]everything happens for a reason, so I’m happy. Thank you for voting for me.” She may wind up more famous than Miss Philippines.