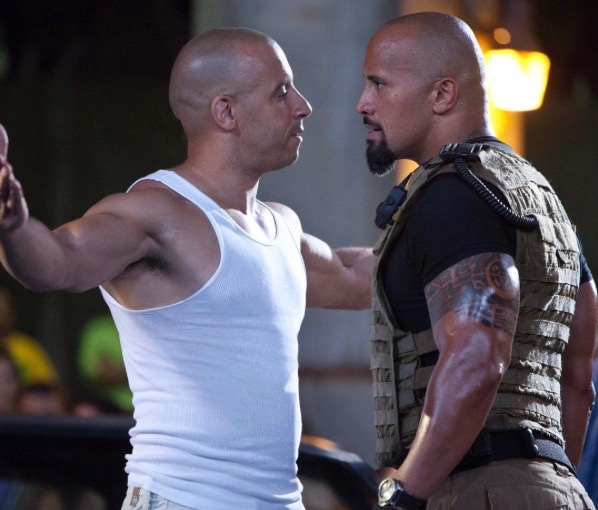 They say familiarity breeds contempt, and in the entertainment industry, its doubly true. I would extrapolate that to say that it’s probably time to put the completely unnecessary, yet high-grossing film sequels to rest once and for all when you start inciting social media shade against your co stars of nearly a decade. That my friends, is happening right now. The beefiest of Hollywood beefs is ongoing, and to be honest, it’s kind of hot.

Apparently things have not been so cozy between The Rock (aka Dwayne Johnson) and Vin Diesel (aka Mark Sinclair…in case you didn’t know that) on the set of the eleven-billionth Fast and Furious movie titles Furious 8. According to just about every internet source you see, the aggro is a result of The Rock having taken to social media to publicly diss not only Vin Diesel, but some of his other costars as well!

I have to say, I have always had a particular idea of what The Rock might be like, and that idea was that he is a nice guy. Hell, if his Instagram feed is anything to go by, he’s all puppies and workouts, with time for little else. That’s why I was so surprised when I saw the “barely blind item” that he posted on his Facebook page.

This is my final week of shooting Fast & Furious 8. There’s no other franchise that gets my blood boiling more than this one. An incredible hard working crew. Universal Studios Entertainment has been great partners as well. My female co-stars are always amazing and I love ’em. My male co-stars however are a different story. Some conduct themselves as stand up men and true professionals, while others don’t. The ones that don’t are too chicken shit to do anything about it anyway. Candy asses. When you watch this movie next April and it seems like I’m not acting in some of these scenes and my blood is legit boiling – you’re right.

Bottom line is it’ll play great for the movie and fits this Hobbs character that’s embedded in my DNA extremely well. The producer in me is happy about this part. Final week on FAST 8 and I will finish strong.

First of all, can we just talk about his use of the phrase “candy asses?” Does anyone even use that term in the year 2016? To me, “candy ass” is something a drill instructor would yell at you in 1952 because you were afraid to climb that big net thingy at boot camp. Apparently all those years in the WWE must have somehow gotten absorbed in to The Rock’s narrative.

Anyhow, it doesn’t take a genius to see who The Rock is referring to in this Blind Item, and after a very short period of speculation, the internet arrived at the conclusion that it was Vin Diesel. What exactly inspired the post is a little harder to pin down, outside of the very obvious fact that there are a lot of massive egos involved in this production. The cast of Furious 8 also includes such big names as Scott Eastwood, Jason Statham, Vin Diesel, Kurt Russell, Kristofer Hivju, Lucas Black, Tyrese Gibson, and Ludacris, although from the press surrounding the feud, it’s pretty clear that the two key players here are Diesel and The Rock. So what exactly happened? It’s a little hard to work-out. Sources who spoke to People magazine have gone on record saying that “the tension has been building for months”, but the stairs that are coming out seem not to have a clear protagonist and antagonist.

Johnson was first to publicly drop hints about the feud with a lengthy Instagram rant calling out “some” of his male costars on Monday. But one set source says the problems began with Diesel’s frustrations over the former wrestling pro’s behavior on set on set.

“Vin has been having problems with The Rock because The Rock keep showing up late for production,” the source explains. “Sometimes he doesn’t show up at all and he’s delaying the production.

For me, that was all a bit unexpected. Again,I have always thought of the Rock as a perennially nice guy, but this little sound byte from People would have you believe that the problem is in fact, The Rock. However, if you read on, the article seems to then counter itself with a Diesel anecdote or two.

There have also been reports of diva behavior on Diesel’s part, especially during the filming of Fast 7. “Vin spent a whole day in his trailer one day,” a source told The Hollywood Reporter in October. “The next day, they waited four hours for him. He called a meeting [May 28] of studio execs to his trailer for two-and-a-half hours to say, ‘What the f— am I doing here?’ ”

Another source told Page Six that Diesel “was constantly late [when we worked together]. The source added that Diesel “acted like a diva and has held up production before” and that “it’s not surprising that he’s the one The Rock is calling out.”

So who’s the good guy here? Likely, neither of them are. My spider senses are telling me that there are a lot of big, fat, fragile male egos all on one place at one time that are all competing for attention, and that is just never going to end well. Especially when they get around to the 8th film. If there is a Fast and Furious 9, I predict that it will have to feature a bunch of personal assistants on Vespas, because these guys will be too busy locking themselves in their trailers and having hissy fits about screen time. It’ll happen…mark my words.