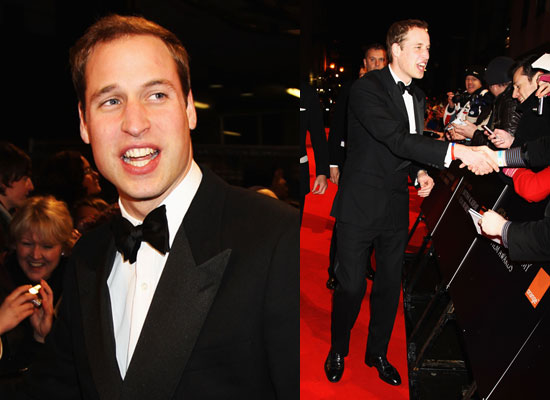 For the second year running, Prince William, aka The Duke of Cambridge, has skipped the BAFTA awards. While normally this wouldn’t be thought of as anything unusual for a member of the Royal Family…I mean, it’s only entertainment, after all, (snort), HRH Willis is the President of BAFTA, and has been for the past six years. As such, there is a certain expectation that he will actually show up to events once in a while. In the six years that he has been President, he has attended the awards ceremony once, and has never attended any of the pre-BAFTA events or, more importantly, the fundraisers. His wife Catherine has never attended a single awards ceremony.

Of course, if you are following the “career” paths of the Duke and Duchess of Cambridge, this will likely surprise you not at all, because the pair have been making sort of a name for themselves in the UK as being fairly work-shy. As one might expect, this latest snub did not go unnoticed by the British press, who at the best of times are notoriously rough on their celebrities when they put a foot wrong. Here is what The Sun had to say about William’s absence.

Idris Elba, Cate Blanchett, Steven Spielberg, Michael Fassbender and Leonardo DiCaprio will all be walking the red carpet at the EE British Academy Film Awards in London on Sunday. But film industry figures have been left fuming because I’ve learned Bafta president PRINCE WILLIAM has decided to snub the glitzy ceremony for a second consecutive year.

The decision has seen many senior movie insiders question whether the young royal’s commitment to the film industry is as strong as it is to sport, especially football. Since becoming Bafta president six years ago, William has attended the awards just two – in 2010 and 2014 – while his wife Kate has never attended. By contrast, he has attended the last two FA Cup finals in his role as president of the Football Association.

Last year, the buzz surrounding the Royal family’s absence at the BAFTAs had a similar patina of disappointment to it; there were all sorts of conflicting stories circulating about whether or not the Cambridges had returned from a vacation in Mystique in time for the BAFTAs (they had). A vacation from what, you ask? Exactly.

What perhaps makes matters worse is that every year, there is a dinner held by BAFTA for the nominees….at Kensington Palace. So for years, the nominees have been dining in a royal palace with no royal host. They have essentially been getting stood up by their hosts at their own party. This has to impact the timbre of the evening much for celebrities who are otherwise happy to have been nominated, and from a PR standpoint for the Royal family, this is an exceedingly poor show. It would take literally no effort for the pair of them, the Cambridges that is, to attend an event that is literally right on their doorstep; an event that is seen as not only the most important event for the British film industry, but also a celebration of British culture, which at last inventory, is something the royals should have a pretty hefty interest in. Here is what one “source” told The Sun.

The Bafta film awards are such a major international event, it’s obviously very disappointing that Prince William has only attended once since becoming president.

So you would think that it would appeal to him then, it “not being hard work” and all. But apparently that’s simply not the case. What makes it even more disappointing is that he even had a more personal reason to attend this year. Apparently he went to school with one of the nominees.

It’s been such an amazing year for British movies, especially for Eddie who went to school with William

The Eddie that the source is making reference to is of course Eddie Redmayne, who was nominated for his role in The Danish Girl. Now granted, I’m not exactly royal blood, but if you learned that someone you knew in school…from your hometown or whatever, was nominated for the top award of an organization that you were the head of, would you not be extra-sure to attend said event!? Represent the home team, and all that? I know I would. And so would most people, as it turns out. Even the people who work for the Duke and Duchess. One “royal source” spoke to The Sun (anonymously, of course).

William has a visit to the Foreign Office pencilled in for Tuesday morning so it’s strange he doesn’t just travel up to London at the weekend before the do on Sunday. His Foreign Office visit is his first engagement of the year, so he can’t claim to be too busy. It’s likely that he doesn’t attend the Baftas every year as he doesn’t want to set an expectation he will always attend

I think that there is virtually no danger that anyone will think that the Duke and Duchess of Cambridge will “always attend” anything. “Ever attending”…that’s the question.