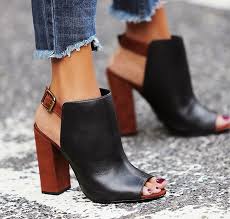 See this blouse? The one that looks like the white one I had in the seventh grade that I used to wear with my high-waisted, Body Lingo jeans and ribbon-covered barrettes? Well, this is not just any old ruffled, high-collared blouse. It’s not even a Victorian blouse (which if memory serves, is what we used to call them). No, this is a pie crust blouse. That’s what the kids are calling them now, pie crust. On account of the collar, see? Apparently, pie crust blouses kind of a thing again, which serves 2 purposes: 1) to make those of us in our mid forties feel incredibly old for having been there the first time, and 2) carbs. Fashion types would rather poke hot needles in their eyes than eat carbs, so this must be an attempt to allow themselves the odd forbidden pastry.

Didn’t know that the pie crust blouse was a thing? Neither did I, and I write about this stuff for a living. I mean, sure – I had seen them out and about and on the odd fashionista, but that is not the same as a full-blown “thing”. A “thing” is huge. A “thing” implies that in about forth seconds flat, every other person yo used on the street will be wearing one. That kind of a thing.

As it turns out, there’s a whole host of “things” out there that are popular this spring but are a bit more under the radar that some of the more popular trends like off-the-shoulder tops and peasant blouses.  Here are a few (more) of my picks. Notice here I didn’t say favorites…for me, the jury is still out on some of these.

Only we’re not calling them bodysuits anymore. No, the bodysuit has  been re-branded itself to simply become a “body”. These are being seen once again paired with ultra high-waisted jeans and or cutoff shorts. Again, for those of us who lived through this the first time and spent the early 90s in a bodysuit and jeans channeling our inner Rachel from Friends, we’re probably less excited about this one than the average twenty something. It’s not that it’s a bad look, it’s just…well….I’m just going to say it. All I can think about when I see lycra-heavy bodysuits in the stores are that the people who sell Monistat, Vagisil, and all other manner of yeast infection treatments will be doing a little happy dance right about now, because their stock just went up. Now this is one that I can get behind. Mules are one of those types of shoes that people either love or hate. I happen to fall into the love category, and not just because they tickle my affection for everything 90s, although that certainly does play a part as well.

It’s true that you have to pick your moment to wear a mule; they’re not great if you have to walk distances, run for a bus or a train, and they are hilariously easy to accidentally kick-off. While the whole “oops I lost my shoe” thing can actually work in your favour under certain social circumstances in which you want to meet that cute guy you spotted from the balcony, really, they take some practice getting used to. Once you’ve gotten the hang of it however, they’re quite addictive.

Personally, I am one of those people who is willing to accept the odd challenging (notice I didn’t say difficult) shoe for the sake of fashion. There will be plenty of time later in life to moan about how the young people of today take everything for granted while I rub my bunions and flip through the catalog of eco-friendly comfort sandals. However, that time is not now. This one is really more of a festival and street style trend. Fringe has been making a bit of a comeback over the past few seasons, both winter and summer, for a few years now. However, street style stars are really the ones who have pushed the fringed shawl (or long vest) to the front pages of the blogosphere.

We’ve seen them layered over a tank top with a pair of vintage-inspired flares, over a pair of culottes for a breezy summer look, or paired with short denim cutoffs for  a bohemian festival look.

While in and of itself, a fringed shawl can skew a bit to the Stevie Nicks/Miss Havisham side of things, mixing it up with more modern cuts in denim and a strong shoe keep the look out of fortune teller territory and into fashionista territory.