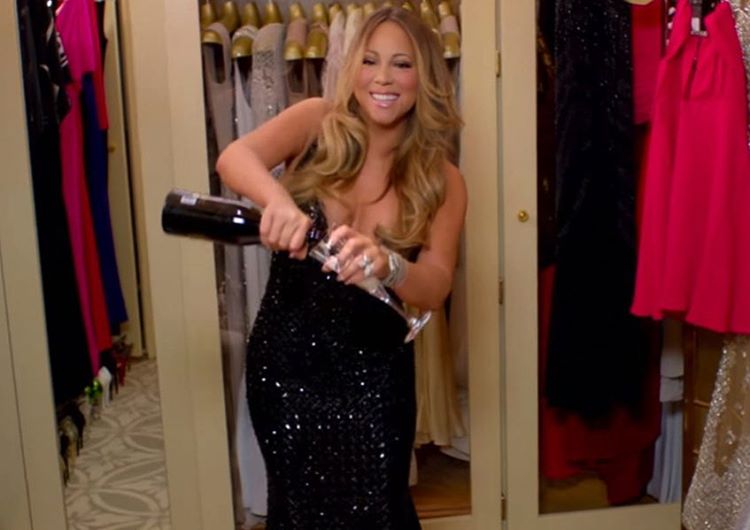 They say the third time’s a charm, and let’s hope that it is, because I sincerely doubt that the universe can take much more of Mariah Carey’s engagement ring troll-fest. As I’m sure you’ve heard by now, Australian businessman, philanthropist, and billionaire James Packer popped the question to Mimi a few weeks ago. Apparently the couple met just under a year ago, and things turned romantic rather quickly, culminating in Packer proposing to Carey with a…..wait for it…35 karat diamond ring a little less than two weeks ago.

Yes, you heard right. That there is a thirty-five karat diamond on Mimi’s ring finger…not like you could actually miss it. It’s pretty hard to find a photo of Mimi from the last few weeks where she isn’t “absentmindedly touching her hair” (see above) with her ring finger, or perhaps “just opening a bottle of champagne…you know, as you do”, with her ring full-frontal towards the camera.

Normally, I’m fairly sure that she has “people” to do such unsavoury tasks as opening bottles for her, but I digress. Let’s get a closer look at this ring, shall we? Yes, that is a big rock. It was made by jeweler Wilfredo Rosado, and to date is the largest celebrity diamond ring on record, beating-out Elizabeth Taylor’s 33 karat diamond from Richard Burton by a healthy 2 karat margin. And what’s more? Apparently that big rock cost upwards of 8 million dollars! Can you imagine wearing a cool 8 mill on your hand every freaking day!? As much as that sounds like the jewelry-lover’s dream that I always thought I wanted, it actually sounds more like a recipe for a constant panic attack. Imagine trying to put on gloves. Imagine trying on those filmy mohair sweaters, or trying to finger-comb your hair….it actually seems like it could end-up being a worry-inducing hinderance to the practicality of modern life! Even Mimi herself joked about this in an interview with E! News.

Can’t life her arms. Don’t you hate when that happens? I know I do.

Mariah decided to debut her nice chunk (insert your own joke here) on the red carpet at the recent G’Day Los Angeles Gala, pairing it with a simple black form-fitting dress that ensures that the rock not only does not get upstaged by her clothing, but would always have the perfect backdrop against which to be photographed.

There’s no getting away from it – if you are a person who appreciates jewelry, you can appreciate this beautiful ring. However, appreciating a beautiful piece like this and actually wearing it (for most of us peasants anyway), is an altogether different matter. A great friend of mine (who was quite the jewelry collector herself) once told me that after a certain size, there is a bit of a law of diminishing returns when it comes to how expensive a piece of jewelry actually looks. you know what? She was absolutely right. While there is no doubt that Mimi’s ring is stunning beyond words, and the jewelry buff in me wants to like it…thinks I should like it, but I’m kinda meh about it. I actually find a bit…tacky?  I can see the beautiful workmanship, the quality of the materials from here for goodness sake, yet a part of it still registers as “fake fabulous” in my brain. I really think my friend was on to something. The bigger and richer the piece, the less believable it looks. Now granted, if you live in a world where it is black tie every night (as Carey and Packer do), the goal post likely shifts a bit as to what a “believable” size is. I suppose when everything you own is on sort of a fake-fabulous scale, it changes your perspective.

Interestingly, the always-entertaining internet had a few choice observations about Mimi’s new rock. The prizewinner, in my opinion, is this meme starring Mimi’s ex, Nick Cannon. Along with the more lighthearted responses and well-wishers of the internet were a few people who were a little less than impressed with the ring.

So Mariah Carey’s engagement ring is 34 carats.There are people starving to death in this world. That’s just offensive.

To hell with the poor eh? makes me sick spoilt filth

The bigger the ring the shorter the marriage it seems.

Never being one to shy-away from diva rumours or a good scandal, Carey is taking it in her stride, and getting-on with the wedding planning. To date, everything has been running pretty smoothly according to Carey and Packer, although there is just this one, teeeeeeny, tiiiiiiny thing that in interviews about their upcoming nuptials, they keep forgetting to talk about.

Both of them are still married to other people.

As for when we can expect the super-lavish, three-ring circus of a wedding that is likely to follow whenever these two can actually legally extricate themselves from the last person they pledged their undying love to, we actually might be in for a surprise. According to Carey’s interview with Radar Online, this being a third marriage for both of them, they’re not going to go for a big wedding.

We are not doing a big wedding because he did two big weddings, and it’s kind of like, I’ve done a big wedding too.  We would rather make it beautiful but humble.

I think that ship has sailed.