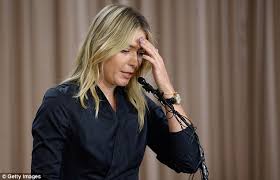 In a turn of events that admittedly, few of us saw coming, it seems one of the shining stars of women’s tennis has taken a rather public tumble from grace. In a press conference yesterday, Sharapova admitted that she had tested positive for the drug Meldonium, which in January was placed on the banned substances list.  Sharapova has been taking the drug for years, allegedly for a magnesium deficiency, but claims that she didn’t know that the drug had been added to the banned substances list. Here is her statement she made at the press conference.

I did fail the test. I take full responsibility for it. I made a huge mistake. I let my fans down. I let my sport down…I don’t want to end my career this way. … I know many of you thought I was retiring. But if I was ever going to announce my retirement it would not be in this downtown Los Angeles hotel with this fairly ugly carpet. While that last statement was undoubtedly an attempt at levity, it seems rather an odd time and place to be making quips about the carpeting, but perhaps she was advised to do so – to keep it light and all that. Either way, it smacks of an attempt to minimize what’s really going on here.

So what is really going on here? That’s a little harder to pick-out. The World Anti-Doping Agency has recently added the drug to the list of banned substances because thee has been “evidence of its use by athletes with the intention of enhancing performance.”

Which does not look good for Sharapova if that be the case – and things are already starting to slide. Sharapova, despite the fact that she has only won five grand-slam titles in her career, makes $30 million in endorsements yearly, making her one of the highest-paid stars in women’s tennis. However, that is about to change. Nike has already suspended her endorsement deal, a $70 million contract that she has had since 2010.

So just what is Meldonium, and why would an athlete feel the desire to risk everything by taking it? According to the BBC, Meldonium is “designed to treat ischemia, a condition where there is a reduction in blood supply to body tissue. It is also said to have benefits for diabetes sufferers.” Because of the drug’s ability to deliver blood supply to the tissues of the body, the drug potentially enhances “mental focus, removing external stress so you feel sharper. There is a slight central nervous system effect, like with stimulants such as caffeine, which gives you a sharper edge”, which is exactly why an athlete might want to use it. Additionally, it is said to help aid a faster recovery after hard physical effort, which only makes matters worse for how  it looks for Sharapova. So why would Sharapova take such a risk? It’s hard to say why such a high-profile athlete would risk everything for a performance-enhancing substance, but while she is certainly the most high-profile athlete to test positive, whe is not the first, thus pointing to what probably is widespread misuse on a scale larger thank he public would care to think about.

The drug has proved popular among endurance athletes in particular, and several distance runners and speed skaters have also fallen afoul of the new banned substance law this week. But what is perhaps more damaging in Sharapova’s case is not even the fact that she has tested positive, but rather her vague explanations for how she found herself in this position to begin with. As The Guardian pointed out, “you could forgive an athlete for tripping-up over herbal supplements, as has happened in the past. But Meldonium is no herbal supplement. Nor is it caffeine, or a multivitamin. It is an ischaemic heart (heart disease) drug, created for people who are very sick.”

The guardian goes on to explain the following about the drug’s testing and use, making it even more clear that this is not a drug that could be used accidentally or unknowingly by a fit and healthy athlete.

That this drug is being used by even one in 50 athletes (and one in 6 in Russia, where it is readily available given its Latvian origin) should highlight the absurdity of it all – a regulated drug, prescription only, being more prevalent in elite athletes than in many elderly, I’ll populations is an untenable situation.