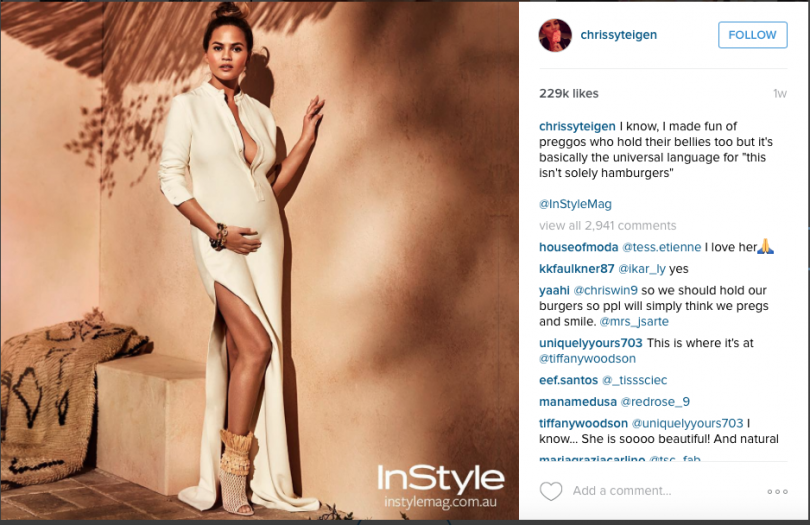 What time is it? Celeb baby roundup time! The celebrity world welcomed some new additions recently and we’ve got all the scoop. We’ll also share who’s pregnant, and the latest hookups in the Hollywood scene.

It’s a boy for Louis Tomlinson! The former One Direction star welcomed his first child, son, Sydney Rain, in an event that confused many on Twitter. When the name hit the social media network, many Twitter users thought it was about a rainstorm in the city of Sydney, Australia, when the name trended online. Louis had the baby with  Briana Jungwirth, a former fling, according to The Daily Mail. No news has been shared of the baby’s last name. Tomlinson broke the news to fans on Twitter, tweeting “I’m pleased to say my baby son was born yesterday :) He is healthy and pretty amazing :) I’m very happy!! He also tweeted “daddy daddy cool.” No photos of the tyke have been shared on Instagram yet, but check back here to see any updates. Mama Briana is a stylist based in Los Angeles, where the baby was born.

Crooner Michael Buble also had a baby. Elias Buble, who joins Michael’s son, Noah. Congrats, Michael! He shared a photo on Instagram of the new bundle of joy. This Michael’s second child with Luisana Lopilato. Holly Madison, formerly of Hugh Hefner’s harem, is pregnant again. Holly currently has a 2.5 year-old-daughter named Rainbow, and according to People, will welcome a new baby in August. She’s currently married to Pasquale Rotella. Another celeb expecting is indie darling Jena Malone, who just promoted her new movie at Sundance.Malone shared a touching tribute to her mother and child with a poem on Instagram. The father, Ethan DeLorenzo, she called her “beautiful big-hearted baby daddy.” Brooke Andersen of Entertainment Tonight will welcome a third child with husband Jim Walker this May. The couple has elected to be surprised by the gender at the delivery.

The country duo known as Thompson Square just got a new bandmate. Keifer and Shawna Thompson (get their group name now?) announced that Shawna had given birth to son Rigney Cooper Thompson this week. The baby’s name comes from the maternal grandmother’s maiden name.

Earlier this month, Kelly Rowland shared video of her son taking his first steps. The adorable video was taken for Parents magazine. She also shared a picture of the two playing during the magazine photoshoot. Meanwhile, in pregnant hot mama news, Audrina Partridge and Christy Tiegen are knocking it out of the park. The two look flawless in every baby bump shot! Audrina announced her pregnancy, via, where else, Instagram in the post below. The baby’s father is Corey Bohan, and the two became engaged in November. Two big celeb hookups are happening and it’s a surprise to Hollywood!

Miley Cyrus and Liam Hemsworth are engaged again. Insiders are telling news sources that the wedding is back on, and Miley is making plans. The reason that they called it off before? “They needed to grow up and figure themselves out more.”

Okay, but you know, Liam was making movies all over the world while Miley was touring, so that may’ve played a part too, right? Hard to be together if you’re not..together.  Miley can’t stop showing her engagement ring in Instagram photos, like the one shown here. The ring is the same one as she had before, with a beautiful 19th century stone. Ready for the rest? Orlando Bloom and Katy Perry are dating. The two were spotted at a play in Los Angeles last week and this only fuels the rumors of their relationship. They were previously spotted at a Golden Globes after party.

Lastly, the Charlie Sheen train continues! Denise Richards is suing Charlie, and has filed a $1.2 million dollar lawsuit against the actor. Why? He reportedly evicted her from the home that belongs to a trust in Lola and Sam. Sources like Page Six say the actor’s kids are actually afraid of him because of his crazed outbursts. He allegedly threatened to give away his kids’ Christmas presents. and also texted the kids about what a “loser” their mother is. Classy. She did take care of the kids that he had with Brooke Mueller though and Brooke has again returned to rehab. Meanwhile, Charlie is is holed up in Mexico according to reports. His lawyer says this is all about money, and that Denise Richards wants child support.