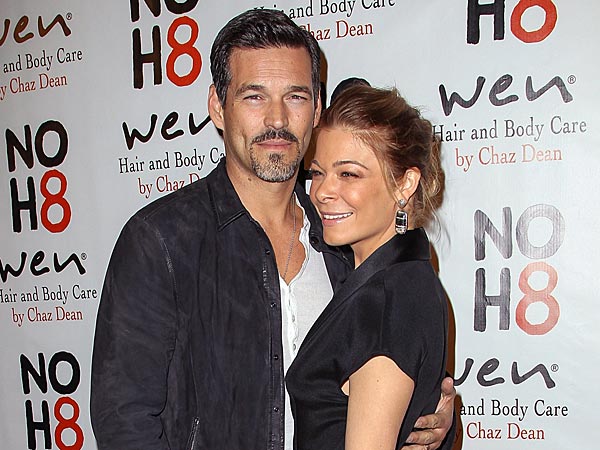 There is never any shortage of Buzz surrounding LeAnn Rimes and Eddie Cibrian; right from the very start, their affair-turned-marriage and Instagram antics have been raising eyebrows and supplying gossip writers with plenty of fodder. So as a gossip writer, I suppose before I proceed I should issue them a heartfelt thanks for the material – we simply couldn’t do what we do without you guys.

Now that that’s out of the way…rumours of marital strife between the pair have been circulating almost as long as they’ve been together, and this week, things appear to be ramping-up. Now it seems that the pair may be hurling themselves full-on in to a debt spiral that, for most of us, would take three lifetimes to claw our way out of. According to Star Magazine, the pair are living well beyond their means.  They have been borrowing money left and right, including from their closest friends, a couple named Dave and Lizzie Fradin. A source told Star that the pair are living almost completely on borrowed funds, and on the equity leveraged against their $3 million Hidden Hills home. However, Eddie and LeAnn had to borrow $350,000 from the Fradins as a down payment on that very same home.  After that, they took out a $2.1 million loan to cover the rest. Even stranger yet is the fact that for their anniversary vacation, Eddie and LeAnn decided to bring the couple on their trip with them. It seems that the couples are what star describes as “constant vacation companions”, and even on an anniversary trip, an event where you would think that you would want to spend some time alone with your spouse, they are in each others faces. Here is what one source told Star Magazine.

LeAnn and Eddie brought the Fradins along to Cabo (Cabo San Lucas, in Mexico) for their anniversary trip, and Eddie spent most of the trip bonding with Dave. LeAnn tried to chat up various men, just to get Eddie’s attention. He wasn’t biting. Eddie doesn’t care who she flirts with, he has no passion for her anymore. LeAnn was trying to get Eddie’s attention, but he was totally checked out

Oh dear. this does not sound at all good. I suppose that when you consider the way Eddie and LeAnn met (they were both married to other people at the time, him to hot mess Brandi Glanville, and her to Dean Sheremet), you might expect that at some point, The Universe might come calling. Although in this case, I’m guessing that the bank just might beat The Universe to the punch. Either way, if I were LeAnn, I’d be very suspicious of Eddie’s wanting to sidle-up to Dave Fradin. Chances are he’s “keeping his enemies close”. I say this because Lizzie looks exactly his type, and with Eddie, this kind of thing is not without precedent. Just sayin’.

According to Star’s source, Eddie is an insufferable gold digger, and isn’t working at the moment, allowing his wife to keep him financially swaddled in the lifestyle that he has become accustomed to.

Eddie married a mega-rich woman but now, with LeAnn’s career in crisis, they’re living on loans and struggling to make ends meet. It’s only a matter of time before the money runs out and they can’t borrow any more. When that happens, Edie won’t be sticking around… bottom line, Eddie is a complete golddigger. Deep down LeAnn knows he’ll leave her if she can’t regain her fame and fortune. If she can’t keep the gravy train going, her marriage is over Interestingly, Eddie has done very little in the way of work since he’s been with LeAnne. While normally I would decry such an action as a complete deal-breaker, sources close to the couple are all saying that LeAnn actually prefers it this way. As I’ve mentioned, Eddie is particularly known for his wandering eye, and  LeAnn just might feel that if he is not in a Hollywood environment surrounded by beautiful women, she might hold on to her prize for just a little while longer. This is a sentiment that is pretty much echoed verbatim in Star’s latest profile of the couple.

Because of the constant rumors of Eddie’s wandering eye, LeAnn’s incredibly insecure and she’s glad Eddie isn’t working, because she fears he’ll sleep with any cute actress in his line of vision

I don’t know about you guys, but if even a fraction of this stuff is true, I am actually starting to feel an unexpected sensation within me…what could it be….is that….pity? Yes. Yes it is. I actually am beginning to feel just a modicum pity for LeAnn Rimes. LeAnn is a talented singer and musician, and she is clinging so hard and fast to Eddie and the facade lifestyle and relationship that the pair has cobbled-together through Instagram and the like that it appears to be having a detrimental effect on her career. Although it must be said that LeAnn herself is certainly not doing much to help herself in that department. Star also reported on this, and it looks like LeAnn might want to think about officially changing her stage name to Little Miss Diva Pants.

She’s constantly skipping shows and forgetting her lyrics. An insider says: “LeAnn badly needs a hit, but what does she do? Makes enemies in the business

I’m no expert, but as a strategy for career longevity, this seems like a poor choice. Then again, if Eddie Cibrian and LeAnn Rimes aren’t experts on making poor choices, I don’t know who is.