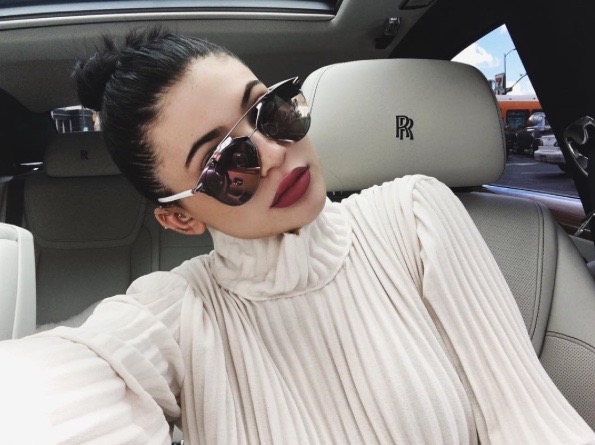 Earlier this week, police reportedly got in contact with Kylie Jenner in an attempt to try to encourage her to rein-in her social media presence a bit. While seeing less of Jenner on social media sites like Instagram and Twitter is certainly a point on which we can probably all agree, the reasons behind their decision to contact the star are a far cry from the usual flood of annoying vapid duck-lipped selfies and shameless brand endorsements.  As it turns out, the LAPD have some very legitimate concerns for the young celebutante’s safety. Not unlike many celebrities who are a constant fixture in the public eye, Jenner has had to deal with stalkers. However, it was one stalker in particular who worried the authorities enough to want Jenner to take some preventative action. The man in question had attempted to gain access to Jenner’s house no less than ten times, but had recently been a patient in a psychiatric facility. Police contacted Jenner when they learned that the man was about to be released. They feared that in addition to knowing where she lived, the man would easily be able to track her movements through social media and try to confront her in an environment that is less secure. When looking at Jenner’s Instagram feed, it is easy to see how someone who is obsessed with her could easily glean more information than you might think. Visible in her photos are the logos of her car, the very identifiable interior of a gym, front doors, walkways, and storefronts of places she frequents…it’s all there for the taking for anyone who might wish to track her down.

As it turns out, they had every reason to worry. Within days of his release, the man once again attempted to break-in to Jenner’s house…on Christmas Day. According to official reports, the stalker’s identity has not been revealed. All that is publicly known about him is that he believes himself to be the “soul mate” of Ms. Jenner. This last attempt to break into Ms, Jenner’s residence, which we believe to be his twelfth, landed him right back in the psychiatric facility, only to see him escape after what one source referred to as “a series of scary events”. Luckily, local authorities once again tracked him down, and he was re-admitted to the facility on a 72 hour hold.  Local authorities, identifying the man’s very obvious intent to never stop trying to contact Jenner, decided that it was probably time for the reality television star to take more proactive action.

In addition to trying to encourage Jenner to curtail her social media photos (so many of which contain identifying landmarks, logos, or settings), the LAPD is strongly encouraging Jenner to get a restraining order against the man. Because legally they can only hold him in the psychiatric facility for up to 72 hours without more substantial evidence, authorities are hoping that if Jenner gets a restraining order, they may have more leverage to hold him for longer than 72 hours, or even prosecute him if he chooses t0 violate this restraining order

While it likely provides little in the way of comfort for Jenner, stalking is something that is all too common among Hollywood celebrities. Sandra Bullock was once surprised by her stalker as she rounded a corner … in her own house.   In the late 80s, a woman called Margaret Mary Ray was so obsessed with David Letterman that on one occasion, she was caught refusing to pay $3 toll on the NY expressway…while driving Letterman’s car. Without permission, naturally. Justin Bieber (I know, I know….but hear me out) also has been at the receiving end of some unwanted attention. His stalker Dana Martin, who believe it or not is a 45 year-old man, started innocently enough by getting the singer’s likeness tattooed onto his leg (eeeeew!)

When that didn’t satisfy his “Bieber on the brain” (his words, not ours), he started writing love letters. When he got no response, he started plotting the singer’s death (you know…as you do…). Once caught and jailed, it didn’t end there. Martin actually hired some inmates to dispatch the singer for him. Upon their release, the inmates were caught en route to Canada (presumably where Bieber was staying at the time) and were sent directly back to jail.

While we can appreciate the role that social media has played in the success of the Kardashian-Jenner clan, we here at Trendelier think it’s probably wise for Jenner to shore-up her social media game for a while. After all, just about any of us could probably find the gym in the photograph above with little more than an internet connection and an iPhone with Google Maps installed. Let’s hope that Jenner takes a cue from her fellow celebrities and goes through with the restraining order and becomes a little more cagey about how and what she posts on her social media feeds.