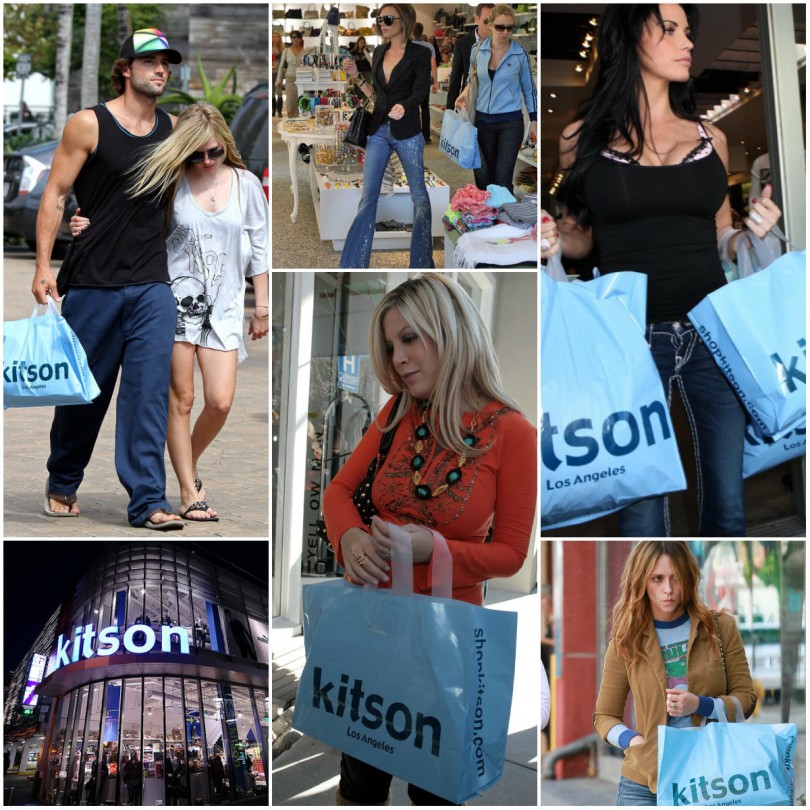 Last week, the Los angeles Times reported that retailer Kitson, once the most popular pap walks of the early to mid 2000s, will be closing its doors forever. In their official announcement, the retailer stated that they will be closing all 17 retail locations throughout California, Nevada, and Oregon, as well as their online e-commerce site. Alas, it seems that Kitson did not have the same staying power as some of its early-to-mid-2000s-era cohorts. In the current year 2015, you can still enjoy such 2000s delights as a re-run episode of Friends, a pair of low-slung bootcut jeans, or even one of those God-awful Juicy Couture sweatsuits if you’re really that much of a glutton for punishment (please don’t), but I’m afraid to say you’re going to have to source your rhinestone-encrusted trucker hats and psychotropic drug sports jerseys elsewhere.   Some would say that the company’s rather unceremonious exit from the trading floor is poetic justice; a fitting exit for a retailer who made a very big name for themselves cashing-in on the concept of being the most of-the-moment backdrop for some of the 2000s fastest-rising (and thirstiest) stars. The chain opened in 2000 with its flagship location on the designer-heavy Robson St. in Los Angeles, and quickly became a publicity sponge for the likes of Paris Hilton, Kim Kardashian, Lindsay Lohan, and many, many more celebutantes with more money than sense.   It seems that all has not been well in the state of Kitson for longer than any of us may have realized.  Back in 2013, the company was floundering financially, and a $15 million line of credit was extended to them by Salus Capital Partners in an attempt to help them to refinance their debts and provide a bit of working capital; in other words, to keep the wolf from the door. However, nobody could have forseen just how costly it actually is to run seventeen large businesses all specializing in sequinned “Mrs. Kutcher” t-shirts and multiple copies of the “Drunk, Stoned, or Stupid Party Game”, because less than two years later, the company was again flailing.

In 2013, Spencer Spirit holdings Inc offered Kitson yet another loan; $15 million was given to Kitson so that they might pay-down the loan from Salus Capital and keep an inevitable bankrupcy at bay for just a little longer.  It’s worth mentioning here that Spencer Spirit Holdings is the Company that owns not only the successful Spirit Halloween costume store chain, but also is the money behind joke and novelty shop Spencer Gifts (rhinestone-encrusted joy buzzers all around!)

According to the LA Times, despite this new rather substantial cash infusion, Kitson took a portion of the money and financed an “aggressive” expansion in the Beverly Center and at Fashion Island at Newport Beach. Even as recently as this past summer, a spokesperson for the retailer was quoted as saying that Kitson had plans to open a foreign flagship store “in the very near future.”

But it was not to be. The company completely misjudged the amount of income that would be generated by the sales at these new locations (as well as by the rest of their existing locations), and they were no longer able to cover their debts. There may have also been a bit of the ostrich-head-in-the-sand thing going on about their overall business model as well; the younger demographic that makes up a bulk of their customer base is increasingly used to sourcing and purchasing things online.

But Kitson’s problems didn’t end there. In 2014, they were sued and taken to court by Vivienne Westwood’s company for a breach of contract. According to the California Apparel News, Kitson had made a deal with Westwood’s company to purchase $41, 363 of clothing, which was delivered, but never paid for. The case is ongoing, and the two sides are scheduled to appear in Los Angeles County Superior Court of February 16, 2016.

In one of the most lightning-fast moves that we’ve ever seen in the retail world, the online portion of Kitson’s enterprise appears to already be shuttered. While the announcement that they were closing their doors only came on the 11th of December, the website was already apparently non-operational, leading customers to the in-store sales that will be happening as the retail locations close. The sales will be run by the firms Gordon Brothers Group and Hilco Merchant Resources, and are scheduled to be ongoing this week until everything is gone. Sadly, this doesn’t bode well for Vivienne Westwood, whose court case isn’t until next month. But then, that may very well be the whole point of the exercise.

In the meantime, if you need any $250 cropped t-shirts with “social climber” written on them, or perhaps a signed and numbered Brian Lichtenburg t-shirt for $500, we’d be happy to have a crack at making you one.