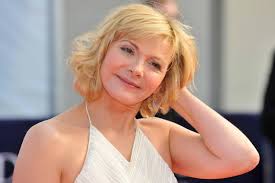 Kim Cattrall, widely known as Samantha from the popular 90s television series Sex and the City, shocked the internet yesterday when she posted photographs of a very graphic car accident, that just happened to be literally in her own front yard.

At approximately 1am on Tuesday morning, a 16 year-old driver smashed her white SUV smack-dab into the very center of Cattrall’s Vancouver Island home, causing extensive damage to the front door and windows, as well as internal and external structural damage. According to the Daily Mail, the 16 year-old driver was out for a “joyride” with friends. Luckily, nobody was hurt in the incident. Cattrall immediately took to Twitter to get out ahead of the story and let friends, family, and fans know that she and her family were ok. Not so OK however, was just about anything that had been standing outside her house.

While no details have been released as to whether or not alcohol was involved in the incident, After Cattrall’s initial Twitter post, social media users addressed the issue, and there were suggestions that perhaps alcohol had been involved. These suggestions were further fuelled by a Tweet by Cattrall herself, stating that the teenaged driver  was “joy riding with her drinking pals and is now free to drive around today without any restrictions.”

Cattrall also posted a Tweet to Mothers Against Drunk Drivers (MADD), again strongly suggested that alcohol was indeed a factor. Cattrall gave a public thanks to all of her supporters on social media, stating that she was “shaken-up” but that “everyone was accounted for.”

In other news, Jennifer Garner is on the cover of the latest Vanity Fair looking great, and appears to be willing to dish about all of the things that we’ve ben dying to know – in particular, Nannygate. There is probably nobody in Hollywood right now that has a tighter PR game than Jennifer Garner, and I am including Kris Jenner in that (who arguably shares the throne with her from time to time). Jennifer’s interview is like a masterclass in throwing subtle shade that the recipient doesn’t even realise they’re conscious of until much, much later.

Right from the start, Garner sets the tone about her marriage to Ben Affleck.

It was a real marriage, It wasn’t for the cameras. And it was a huge priority for me to stay in it. And that did not work

Translation: I was fully committed to making my marriage work, but he was not.

We had been separated for months before I ever heard about the nanny. She had nothing to do with our decision to divorce. She was not a part of the equation. Bad judgment? Yes. It’s not great for your kids for [a nanny] to disappear from their lives. I have had to have conversations about the meaning of ‘scandal,’

Translation: Thanks a lot Affleck, for making me have to teach our very young children about the public embarrassment of betrayal in a relationship years before anything like that should ever have occurred to them.

I didn’t marry the big fat movie star; I married him. And I would go back and remake that decision. I ran down the beach to him (at our wedding), and I would again. You can’t have these three babies and so much of what we had. He’s the love of my life. What am I going to do about that? He’s the most brilliant person in any room, the most charismatic, the most generous. He’s just a complicated guy.

I always say, “When his sun shines on you, you feel it.’ But when the sun is shining elsewhere, it’s cold. He can cast quite a shadow

Translation: I loved him then and I love him still. But he didn’t put our relationship first or equal my affection for him, leaving me out in the cold.

See what I mean? The girl is downright artful in her approach to a “tell all”. She could have easily just gone the full reality TV star and started spilling the beans about how many facelifts he’s had or what drugs he’s addicted to, but she took what I suppose is the equivalent of the gossip high road. Her shade requires you to seek the hidden meaning, and is full of really stark imagery that depicts her as the wronged party. The sun and the shade. The shattered dream of dancing at her daughter’s wedding. There are literally so many amazing and shady quotes in the article (like the above Instagram pic), I think Garner hired some professional help for this one. Not that she isn’t fully capable of handling her own PR game, but a good manager knows then to bring in an expert, and these lines…they weren’t just written, they were written. By a writer.  These are the product of someone who plays around with words for a living, and knows exactly how to cultivate them for maximum effect. And said writer is damn good at it too. So whomever you are…respect.