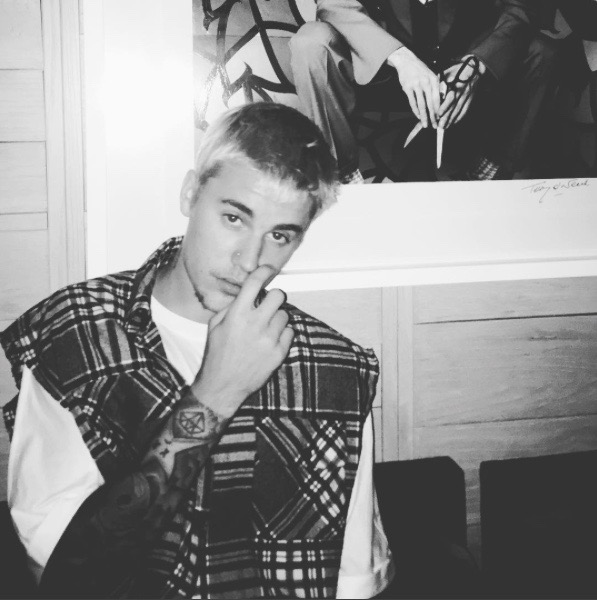 Here he is again ladies and gentlemen, it’s Justin Bieber – making friends everywhere he goes! And by “making friends” I mean “pissing people off.” However, before we get into Bieber’s latest kerfuffle, I’d like you all to take a moment and take-in what he is wearing.

Just what exactly is he wearing right there!? It looks like something you’d put on a toddler, if that toddler were going to a play date…in 1982! I was in junior high school back in the 80s, and I had a pair of cropped white denim jeans that had that very same paint-splatter pattern all over them as the t-shirt Bieber is wearing. Just sayin’.  Turns out I’m not alone either. Check out the comments from the above Instagram shot; everyone is questioning this sartorial choice, so that’s how I know it’s not just me being a crusty old gossip writer. This outfit is the absolute height of douchebaggery.

But I digress. Apparently Bieber is in hot water again. This time, the Biebs has shown us his weapons-grade level of immaturity by getting into a tiff with his neighbors, the Schwartzes. Apparently Bieber has had ongoing disputes with these neighbors, which doesn’t really take a lot of suspending of one’s disbelief to imagine, but this time, Bieber decided to bust-out the heavy artillery. Here is what TMZ had to say about the incident.

TMZ spoke to the neighbor who says he heard something banging against his house in Calabasas around 7:30 PM Thursday, and when he stepped on to a 2nd floor balcony … he says he saw Justin down below hurling eggs at his front door.

According to the neighbor … Bieber started aiming for him once he stepped onto the balcony and yelled, “What the hell are you doing?”

Justin and the neighbor — who’ve had previous run-ins — also got into a verbal dispute while JB allegedly continued tossing a few more eggs at the house … and then retreated back to his home. Bear in mind, Bieber is a youngster, but he’s not egg-throwing young; the pop star is 22 years old! When I was 22 I had already graduated from university! So yeah, I guess what they say about Hollywood is true; when you hit it big and become a celebrity, your development sort of halts right then and there. Since Bieber has been famous since he was practically a playground-aged whippersnapper, it’s no wonder that he has the mental age of a schoolboy. But my characterization of this phenomenon perhaps pales in comparison to that of fellow gossipites over at Dlisted, who had this to say about the event. It’s so good, I thought it deserved a second go-around.

Justin Bieber’s initiation process for the Wild Kidz Club is more involved than I thought, but I guess it takes a lot to impress President Bart Simpson, Vice President Dennis the Menace, and Treasurer Latarian Milton. Pretending to smoke Popeye candy cigarettes isn’t going to cut it; you gotta grow out a teen ‘stache, spray paint a swear, and egg a house before you’re allowed to roll with the big dawgz

For his efforts, Bieber was placed on probation and ordered to pay the Schwartzes $20,000 in damages. Now, I know that eggs can cause damage to paint and whatnot, but 20 grand for egg damage seems mighty step. Granted, this was probably a figure that was hammered-out by lawyers and included recitation for all the “mental damage” that Bieber caused along the way, but still – that must have been a lot of eggs.

While this part of the story played-out over the last year, there have been some new developments in the last few months. The most notably is that Bieber was actually released form his probation one month early… for good behavior. I know, right!? Additionally, the sum that he eventually paid the Schwartzes ended-up not being $20,000, but $80,000! Bieber payed $80,000 in restitution for egging his neighbor’s house! All of the sudden, I feel a lot less sorry for these people for having to have lived next to Bieber. 80 grand for egg damage? There is absolutely no way that’s even possible. And according to TMZ, it’s not over yet. The Schwartzes apparently want more. They’ve told the press that they suffer from headaches and insomnia on account of Bieber’s former occupancy in the house.

I think its fair to say that there is absolutely no question that Bieber was a pain in the ass to live next to, and that he probably did give these people headaches and insomnia for a year. But he moved away, which, when you have a terrible neighbor, is usually the only thing that you really, truly want out of the deal. That Bieber was willing to pay four times the amount of his original court-ordered restitution just to shut them up and make them go away is telling, and probably indicative of his guilt… however, all that he has accomplished is activated the greed monster in his ex-neighbors, and fuelled their thirst for more. If you ask me, these two sets of people deserve each other.