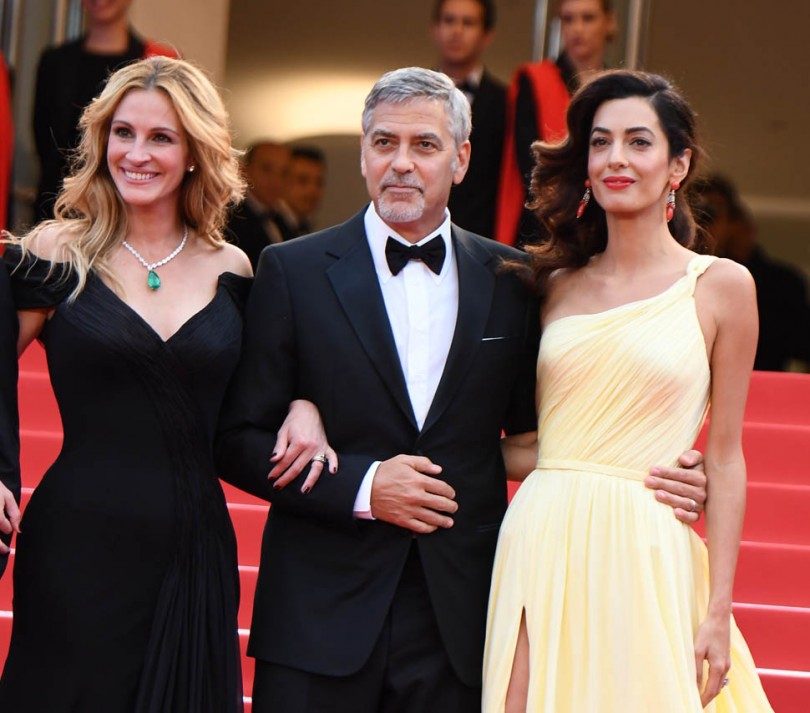 Apparently this year at Cannes, there was a bit of friction between America’s Sweetheart, Julia Roberts, and the spouse of her costar in the newly-released film Money Monster, George Clooney. According to In Touch Weekly, Julia Roberts became quite fed-up with Amal Clooney’s constant presence (perhaps at the insistence of her husband?) and alleged camera-hungry posing during cast photos for Money Monster. One insider even explained to In Touch Weekly why this was an issue.

Cannes has strict rules about a non-movie member posing for obligatory cast photos – it’s a big deal and very rare for a spouse to join. But Amal, with George’s blessing of course, barged right in. Amal wore a look-at-me bright yellow gown amid the cast’s sea of black, she had trouble adjusting her long train in the wind so she also held up the entire process, which meant all eyes were on her

Okay, that’s annoying, right? And I will say that it is a bit odd that Amal would even want to be in these cast photos. If you look at the “official” photographs, she is in fact, the only non-movie-related person in the photos. While this could be easily dismissed because Amal is sort of a celebrity in her own right (via marriage, but still), You have to liken it to something that those of us “regular people” know.

Let’s say that you and your respective spouse are going to your spouse’s company Christmas party together. At some point during the evening, a group of senior executives, of which your spouse is one, decide to take a group photo for posterity. You insist on being in the photograph…after all, that Chief Financial Officer is kind of good-looking, and you would rather remind everyone that your spouse is married to you.

That would be weird, right? Weird and massively insecure. Unless of course, you have absolutely zero ability to read a situation, and a great need to be in front of the camera. So what I guess I’m saying here is that I can sort of see where Julia Roberts is coming from. However, what the source said to In Touch Weekly next made me do a complete face palm when I read it. Remember folks, these are two adult human beings engaging in this series of behaviors.

Julia was stunned that Amal tried to steal her show and her thunder, and that George actually let her. So in retaliation, Julia flirted with George. When Amal felt like Julia was flirting with George, she was seething

Wow, really? Flirting as retaliation? Gosh, I wonder what happened next? Did Amal diss Julia in the hallway before study hall, so Julia had to enlist the help of three of her mean girl squad and write Amal’s mobile phone number on the girl’s bathroom stall with the caption “for a good time call Amal”?

Amal hated how friendly George and Julia were on the set of Money Monster couldn’t can’t stand how Julia monopolised her husband’s time. After the Cannes red carpet, Amal pulled George aside and told him that Julia was being “disrespectful.” Julia was so mad that she had a mini-meltdown about it and was overheard complaining about Amal’s rude move and George should have known better. I don’t know about you guys, but it sounds like both of these women need a time-out and to be sent to the school counselor’s office for some help in working it out. Really, it’s hard to take any of this too seriously. I believe that Amal is probably an insecure pain in the rear, but equally, I believe that Julia Roberts probably has a big enough ego that Amal’s insecurity might actually bother her. Really, this situation doesn’t even need to be a story. We all know that one person that just cannot help him or herself, and most of us, I’m guessing, ignore it when that person kicks-off. Why waste energy on this kind of thing? If I were Julia Roberts, I would probably have turned the other cheek and continued to count my millions rather than be bothered by the likes of Amal Clooney.  However, according to In Touch Weekly’s source, apparently there’s precedent.

After spending some time with Amal and George in Como, Italy last summer, Julia left with a very bad taste in her mouth. Julia would mock image-obsessed Amal behind her back after seeing how Amal constantly had her hair and makeup touched up and wore glamorous gowns during a casual weekend. Julia laughed at her because she thinks she’s so absurd.

While we will never know the true ins and outs of what is going on between Amal Clooney and Julia Roberts, what we do know is that Amal did basically align herself to be in what is basically the Hollywood equivalent of her husband’s corporate Christmas party photo, and…well…that’s weird.