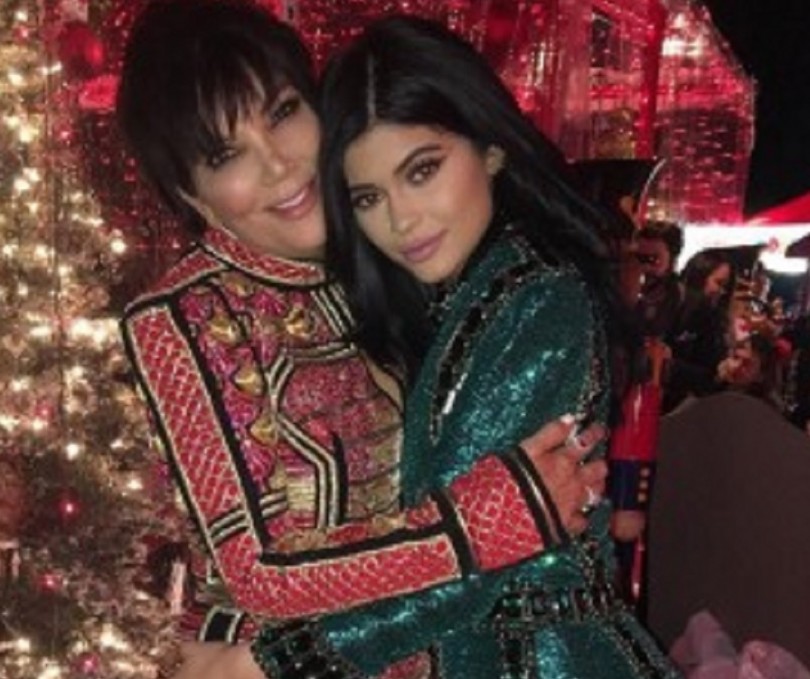 During the Christmas holidays the stars are always out on social media because they want you to know how very happy they are. Of course as a year of reading gossip and celebrity news should have taught you by now, it’s not really about how happy they are, it’s about how happy they want you to think they are! Consider last Christmas. We thought Caitlyn Jenner was Bruce Jenner, Ben Affleck and Jennifer Garner were a model of holding a marriage together, and that Donald Trump was more likely to win Miss Universe himself than ever become president. Meanwhile, Blake Shelton and Miranda Lambert were country music’s #1 power couple. All of these assumptions were completely wrong and we have no idea what will become of these celebrities in 2016. So think about that when you are reading about their holiday cheer on social media! In the Hollywood Hills

Drake is suddenly sniffing up the Kardashians’ Khristmas Tree. He was the most notable guest at Kris Kardashian’s big Christmas Eve bash. The rapper photo-bombed Kris and Kylie’s selfie. This probably got Kris thinking (and reminding) Kylie that it would be prudent to move on from Tyga and land a bigger name already. How much longer will Kylie and Tyga really last? They broke up briefly in November and then decided to get back together but take things lighter. That means they decided not to live together. You don’t need to be a psychic to know the relationship is on its last legs. And he needs her more than she needs him. Kylie and Drake have one big thing in common: both witnessed people trespassing on to their respective estates earlier on Christmas Eve. Both stalkers were arrested in separate incidents. Kylie’s stalker has been to the property at least 10 times and was placed on a psych hold. Hopefully she has a better security system than Kris, whose house was nearly broken in to last week.

Gwen Stefani and Blake Shelton were in Oklahoma on December 22. The two hit up the local Dairy Queen, where Blake is a regular. No one knows if they spent Christmas together or not, but both were expected to be back in Los Angeles for the holiday. How many more months will this romance – or faux-mance – go on?

In Aspen and Los Angeles

Many stars took to Instagram to show how modern and wonderful they are even after a divorce. Kate Hudson and Matt Bellamy posted a picture with the words “Ex-Mass,” while Garner let it be known that she and Affleck would spend the holiday as a family, divorce be damned. The queen of conscious uncoupling, Gwyneth Paltrow had her ex, Chris Martin, over for Christmas too.

Speaking of Chris Martin, his (never confirmed) ex, Jennifer Lawrence, went to visit sick children at a hospital in her hometown of Louisville. Just last week Lawrence had a good time in admitting that she once hooked up with Liam Hemmsworth, but became icy when asked about Martin.

One couple many will be watching in early 2016 is Taylor Swift and Calvin Harris. The two have weathered several breakup rumors and have both turned up together for a Swift family Christmas in Vail, Colorado. Taylor posted photos of the pair and her brother building a snowman. Harris couldn’t look less enthusiastic about any of this. Maybe that’s because he’s the subject of a recent blind item about a musician regretting agreeing to a contract with a pop star? The details all fit the bill, especially since the musician is said to be fretting over how much harder it is than he thought it would be, and how he finds himself worried about his own career since he is being constantly summoned. Harris is a DJ in case you didn’t know; few actually have any idea what the tall Brit does for a living! Although Taylor will appear at ABC’s Rockin’ New Year’s Eve event, where she will drop her newest video, all bets for the pair will be off after that. Don’t forget what happened back in January 2013, when Taylor’s relationship with One Direction’s Harry Styles flamed out spectacularly. All was well during her Times Square appearance. But when she and Styles went on holiday to the Caribbean, they had a massive argument and Taylor was papped looking forlorn sitting on a boat as she left the island early. The breakup was official almost immediately.

To end on a note of completely poor taste, Nick Gordon posted a photoshopped Christmas card featuring him alongside his late girlfriend/wife/sister Bobbi Kristina Brown. In the card, Bobbi is wearing a santa hat and festive presents are floating in the background. This is not only a terrible idea, it will once again put Gordon in the crosshairs of a criminal investigation into Bobbi Kristina’s death. Gordon is being sued by the Houston and Brown families for $10 million. Documents released in October present the family’s theory: “Ms. Brown died due to a violent altercation with Gordon after which he placed her in a bathtub, unconscious, after he injected her with a toxic mixture.” There is still an open investigation into her death, and the police are watching to decide whether they should bring murder charges. Bobbi died in January of this year. Might January of 2016 bring justice for Bobbi Kristina?