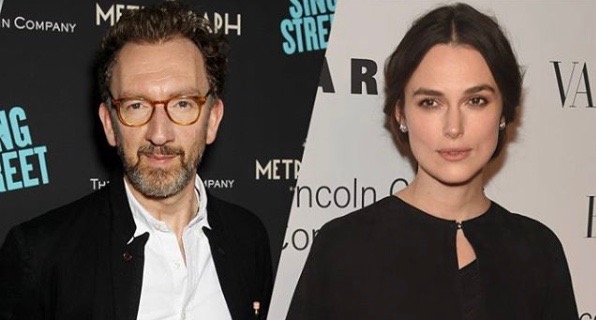 This is a rather interesting story, and I mean that ultimately in the refreshing sense of the word. Early this week in an interview with British news outlet The Independent, Hollywood director John Carney decided to attack Keira Knightley’s talent in what felt like a kind of out-of-the-blue way. Carney directed Knightley in the film Begin Again, which also starred Mark Ruffalo and Adam Levine, and oddly, I think it’s been something like four years since the film came out. He was talking to the Independent because he has a new movie out called Sing Street, about an 80s band. Supposedly Sing Street is getting rave reviews, so the whole Keira thing seems even more off to me.

You’ll notice that there are hardly ever any gossip stories floating around out there about Keira Knightley. She is rumored to be not only a private person, but an amazingly down-to-earth actress and has a pretty steady group of friends and a supportive family. She has won her share of awards, and regardless of what you might think about her acting ability, she has held her own in a lot of films. Regardless of what Carney’s experience with Knightley was, I’ll say it again, it was four years ago. To rehash anything that happened that long ago is questionable. You guys, I have to say it – I smell something, and it has the distinct bouquet of rat.

Independent: Sing Street has had rave reviews. How do you feel about the reaction?

And that is literally the first two sentences in the interview. So at the risk of sounding as juvenile as Carney himself…he started it!

After that initial dig, the interviewer either politely ignored Carney’s diss or just edited out some stuff, because the conversation then turned to Sing Street, which I’m definitely not going to go see because all of the sudden, I now think John Carney is a dick.

Sadly, it didn’t end there. Editing notwithstanding, Carney comes back around again for another go at Knightley later on in the interview, when the conversation turned to the lessons he had learned when making Begin Again.

I learned that I’ll never make a film with supermodels again.

Mark Ruffalo is a fantastic actor and Adam Levine is a joy to work with and actually quite unpretentious and not a bit scared of exposing himself on camera and exploring who he is as an individual. I think that that’s what you need as an actor; you need to not be afraid to find out who you really are when the camera’s rolling. Keira’s thing is to hide who you are and I don’t think you can be an actor and do that. And working with the kids on this film and real instruments there was no hiding going on

So it’s not like I hate the Hollywood thing but I like to work with curious, proper film actors as opposed to movie stars. I don’t want to rubbish Keira, but you know it’s hard being a film actor and it requires a certain level of honesty and self-analysis that I don’t think she’s ready for yet and I certainly don’t think she was ready for on that film. In the Begin Again, Knightley was cast as a singer songwriter. John Carney got his start in music videos, so he is accustomed to working with musicians. I think what he was maybe trying to say (and I am not being a Carney apologist here) was that it is difficult to get the same level of believability from an actor that does not play an instrument or sing than it is one that does. As a former professional musician myself, I get this, and in fact often have a hard time suspending my disbelief when it comes to actors singing and playing instruments. However, this is not just a thing that Carney has to deal with. Everyone who has ever made a movie about musicians and has cast non-musicians in it (usually for the name recognition of having an A-list actor) has dealt with this. The only exception to this I can think of was Adrian Brody in The Pianist, who actually learned how to play the instrument and played it incredibly well for the film. However, even Brody didn’t have to play with other musicians in the film, and that is an entirely different animal indeed.

Basically, what I’m saying is this. For Carney to call Knightley out four years later for what is basically a casting decision that he himself made is complete and utter nonsense. Carney chose A-list Knightley for a reason; he wanted some name-recognition actors in his film. He could have easily made that film as an indie feature with unknown actors who actually play instruments, and it would have been great. But he didn’t, because that is not what he wanted. And Carney didn’t just talk about the film and Knightley’s role as a musician – he made it about her as a person. and he called her a “supermodel”, and at one point even claimed that she showed up everywhere with an “entourage”. Carney’s attitude towards Knightley as “the weak link” in a film that was actually well-received is ridiculous, has in it more than a hint of misogyny, and if there is a deficit in the film at all, it is entirely his fault. I mean, the man cast Adam Levine, for goodness sake, and he thinks that it’s Keira Knightley causing the audience to become distracted!? I’m calling shenanigans on this jackass.

As one would have hoped, a host of Knightley’s former directors came to her defense, which is exactly what any of us would hope might happen if it were us that this was happening to.

As for Carney, he might want to have a look at Katherine Heigl’s career if he wants to know what acting like an unprofessional jackass gets you.