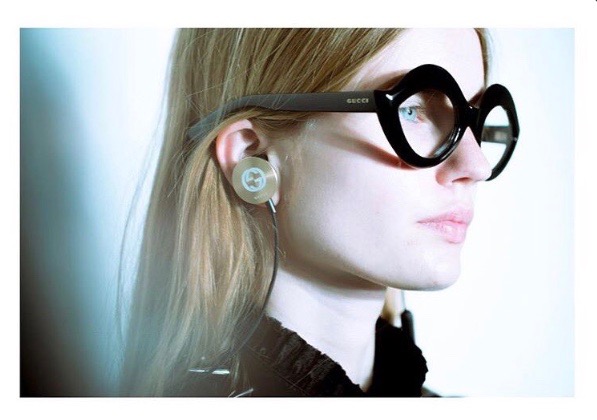 Gucci has been creating waves with their new Cruise 2017 collection. It seems the storied Italian design house has been in the throes of an acute case of  “Brit bug” for a while now, the effects of which are really beginning to manifest in their collections.

Creative director of Gucci Alessandro Michele as made no secret about being heavily influenced by a British aesthetic, and was recently described by In Style magazine as “a self-described Anglophile, obsessed with all things British.”

While mentions of sartorial British influences immediately conjure images of fusty tweed, wellies, and the earthy tones of wax jackets and country heritage clothing, this collection was actually the polar opposite of that type of affair. At first glance, the collection looked almost more like something Kenzo or Moschino might offer; bright colors, riotous prints, and rich textures all were vying for the spotlight within the individual looks which sported such British motifs such as Staffordshire spaniel dogs, floral tapestry prints, and tartans. Even the venue itself, the venerable Cloisters at Westminster Abbey, reflected the design house’s love of all things British.

It is also apparent that the label’s Brit love-fest is not one of unrequited sentimentalism. Apparently the luxury house that owns the Gucci label has reported that the demand for all things Gucci has grown, with a bulk of that increase in demand centralised around high-flying Londoners. This is a relationship that Michele seemed all to happy to foster, right down to the soundtrack for the show; a choral arrangement of the classic “Scarborough Fair” added a haunting yet familiar (and very British) vibe to the proceedings.

I love the English aesthetic. In a way I feel it is close to my own, a beautiful chaos, it is a powerful mix of the past and the present A storied Italian brand falling head-over-heels in love with a British aesthetic wasn’t the only unique thing about the Gucci Cruise 2017 collection. The show itself had a lot of ruffles (literally) and flourishes that made it unique in what In Style has characterised as “this battle [between designers] of who can one-up the other in extravagance and far-flung locations for resort.” There were several other things about the show that also stood out. Gucci launched what they are coining a “wearable smart device” in a branded pair of metal earphones that were conceived and designed in collaboration with Michele and will.i.am. Despite the rather hyper-feminine detailing of a lot of the British-inspired pieces in the collection, there was also a bit of a harder edge achieved by balancing the bright floral prints and ruffled tartans with a bit of Brit Punk detailing. Especially notable were the large rings worn on multiple fingers, the snake head clutches, and a black studded version of their ever-popular Dionysus bag.

The Loco for Logos Aesthetic Whether it was the classic double-G emblazoned on t-shirts, hooded sweatshirts, belts, or of course, the classic Gucci handbags, the brand has not shown us so many logo-centric pieces in decades, and seeing them come down the runway in a modern riot of color and pattern seemed to breathe new life into this steadfast classic. One of the kitschier aspects of the 2017 Cruise show was the decor in the venue itself. Every seat in the audience was covered with an embroidered seat cushion in a motif that was evocative of a British country house. That in and of itself may not seem that exciting, but the fact that each of the guests got to take theirs home after the close of the show put quite a few smiles on a lot of Gucci-clad faces. While some might feel that the riotous color and competing textures of the clothing in this collection called for a quieter, more neutral shoe, the house’s designers felt that footwear should not be left out of the fun. Colourful, rainbow-striped platforms and kitten heels adorned with little plastic cherries were among the many confections on offer, and were every bit as deserving of the limelight as their clothing counterparts. Also notable – a great number of the shoes in the show were paired with athletic-style tube socks. While I’m unsure that we can point to traditional British influences for that one, it does meld well with the eccentric vibe of the collection as a whole.