You know how sometimes you form an idea of what a celebrity might be like in your head, only to be grossly disappointed when it turns out that in real life, he or she is nothing like your fabricated ideal? Sometimes, the reality of the celebrity’s actual personality is such a startling departure that you’re sort of left feeling a little bit sad. Well, fear not dear reader. You are not alone. This past while, I have had my celebrity bubble burst by none other than Dirty Harry himself, Clint Eastwood. Eastwood has been making quite a show of letting himself down with a series of strongly-worded outbursts that reek of the kind of divisiveness and white privilege that most of us usually reserve for train wrecks like the Trump campaign.

While Eastwood has never made a secret of his super-duper-far-right political leanings, this time, he’s taken it up a notch. Like so many of our grumpy grandpas and drunk, outspoken uncles, he seems to be accelerating the rate at which he issues his old school brand of “wisdom” now that he’s reached the autumn of his career. In fact, some of his more recent utterances have been so over-the-top that it would almost seem that Eastwood has been channelling a less likeable version of the character he played in his film Gran Torino – thankfully this time without the shotgun.

Clint Eastwood recently did a joint interview with his hunky actor-son Scott, and the results were a bit of a slow-motion traffic accident, if I’m honest. Sure, there is always going to be an element of rawness to any Clint Eastwood interview, but this one seemed to color outside of the lines of even what little decorum we’ve come to expect from Eastwood, who it should be noted, dominated a majority of the interview, leaving his son Scott sitting in a pile of leftover media table scraps. For that reason, I’m simply going to focus on Eastwood the Elder.

When asked about fatherhood (remember, his son was present for this interview), Eastwood the senior had this to say.

For a man, once you’ve sired your pups, you’re done.

See? Old School. But that wasn’t all. When asked about marriage, he was equally succinct.

Yeah, cut out the middleman. Just find somebody you hate and buy ‘em a house.

Yowza. The tone of the interview started off in this vein, and got crustier and more ornery by the minute. It kept building and building until he finally went there when the interviewer turned to the topic of the Trump campaign and the right-wing talking point of “political correctness”.

He’s onto something, because secretly everybody’s getting tired of political correctness, kissing up. That’s the kiss-ass generation we’re in right now. We’re really in a p-ssy generation. Everybody’s walking on eggshells. We see people accusing people of being racist and all kinds of stuff. When I grew up, those things weren’t called racist. 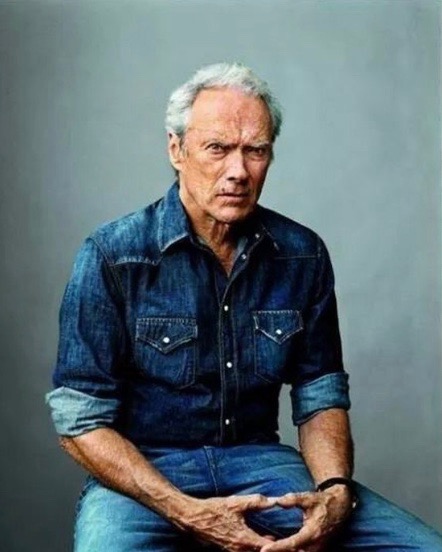 Well, he’s right about one thing in his rather sophomoric synopsis of political correctness and racism; when he grew up, “those things” probably weren’t called racist.  But that doesn’t mean that “those things” weren’t racist.  Here’s the thing; if you are prepared to take the stance that you should be able to say or do whatever you want without regard to how it might affect others,  you have to be equally prepared to absorb the blowback. Using the Trump campaign as an example for this new brand of anti political correctness seems almost laughably incongruous when you put it in this context, because Trump is notoriously incapable of handling any sort of criticism whatsoever. Perhaps nobody in either Eastwood’s or Trump ‘s childhood was calling-out shady ideological tirades (a good example being Trump’s “Mexican rapists” tirade) as overt bigotry, but that doesn’t mean that now that we have the vantage point of being able to recognise it as such, that we shouldn’t call it out when we see it. We absolutely should, and for the most part, we do. What Eastwood is really pining for, what everyone who takes this stance is pining for, are the “good old days” when the power structure was still firmly in the hands of a predominantly white male demographic. Nowadays, when people hear someone glorifying those good old days, that person is probably going to get called-out; whether you’re a woman, an immigrant, a person of color…you have only to look at our history to see that these good old days were problematic for a lot of people, to say the least. Ironically, pointing this out to the likes of Eastwood (and it goes without saying, Trump) is the very thing gets interpreted as “being offended”, or as Eastwood so eloquently puts it, the “p-ssy generation.” Do I even need to point-out that “p-ssy generation” is a moniker that is as misogynistic as hell? And before someone accuses me of “being offended”, I would also point out that I’m not calling you out because I’m “offended”, I’m exasperated.  Listening to public figures you once admired spew wilful ignorance in a public forum is beyond exhausting – for someone who makes a living supposedly capturing the truth behind a storyline, it would seem that the truth of Eastwood’s awareness of his own privilege remains elusive. The bottom line is that the power structure has changed, and continues to evolve, like it or not. Someone wiser than me once said that equality always feels like oppression to those who are used to having all the power.

Sadly, Eastwood’s campaign of crustiness didn’t end there. Eastwood recently granted TMX the most bizarre on-the-spot interview through his car widow as he was leaving a restaurant in Los Angeles. Here is what went down.

TMZ: What do you think of Trump getting into it with the Khan family, the slain veteran’s family?

Eastwood: “Ah… I don’t know, I know nothing about it. I think he made a mistake by making fun of the guy’s dead son but, you know, that’s his business.”

TMZ: Do you think Trump should stop saying inflammatory things, or is it a bad thing to be too PC?

Eastwood: “I think it is bad to be too PC, but I think there is a limit. You don’t have to be rude to somebody. But also, the other guy was being exploited by a political party. That’s no good either. Whether either party does it, exploitation, they shouldn’t take advantage of some poor slob.”

“Some poor slob”. Eastwood, in the name of keeping things on the right side of “political correctness”, called the erudite and learned father of a slain soldier who made the ultimate sacrifice for his country a “poor slob”.

I think it’s time someone turned grandpa’s hearing aid down a notch or two and slip a valium in his scotch so he doesn’t get himself so worked-up…oh wait, was that ageist?