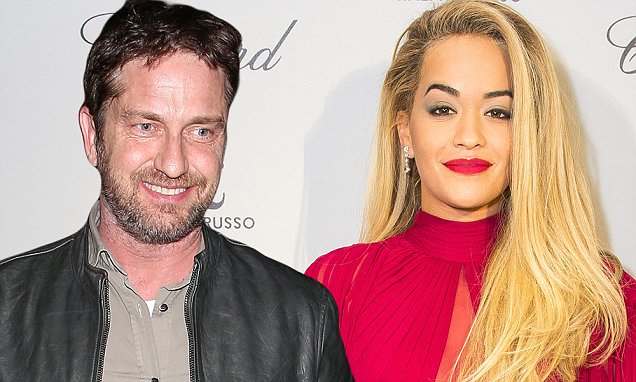 About mid January, something happened to Gerard Butler. Something shocking. Something that must have really rattled the seemingly unflappable Scot to the bone, because he took swift and decisive action. You see, at some point about mid-January, Gerard Butler woke up one morning and realised that he was dating a woman his own age.

Thankfully, the 46 year-old actor realised his predicament and took action; he immediately broke up with his girlfriend, 44 year-old interior designer Morgan Brown. Apparently the couple had been dating for the better part of a year, and Brown was wanting to take their relationship to the next level.

Whew! That was a close one! These are dangerous times that we live in, are they not?

Just to make sure that there was no lingering trace of old lady smell left over from his last relationship, Butler wasted absolutely zero time in doing what he has always done best, boning anything and everything within a three-mile circumference of whatever city he happens to be in.

The city he just happened to be in was Los Angeles, where on January 17th, he found a partner who could not possibly be more willing if she absorbed the auras of 1000 labrador puppies. According to Us Weekly, his partner of the night was none other than The Thirstiest Try-Hard In Hollywood, British Singer Rita Ora, who thankfully is a much more Hollywood-appropriate 25 years-old. Good boy Gerard. Credibility restored. This photograph is from Ora’s official Instagram account, and I’m just going to pause here for a moment to point out the absolutely inexcusable use of the English language that she engages in in her Instagram post. Girl, you know your (that’s Y-O-U-R…the possessive) grammar is bad when complete strangers who follow you on Instagram feel compelled to speak-up. Sorry, make that complete strangers who follow you on Instagram and one gossip writer who does not. Sort yourself out.

But I digress. Here is what Us Weekly reported about the alleged rendezvous between Butler and Ora.

Rita Ora and Gerard Butler shacked up at a West Hollywood hotel January 17. The 46-year-old actor and the British singer, 25, had an intimate dinner at the four-star hotel’s in-house restaurant, then disappeared upstairs together.

An onlooker reported that “They drank wine and she hugged him when he returned to the table from a break. Gerard paid the bill.”

US Weekly also quoted a “source close to Butler, who apparently confirmed that the actor is single again, and “ready to get back out there.” they go on the describe the British singer as “just his type”, and that Ora has “claimed previous suitors have been intimidated by her,  but Butler has said he’s attracted to “confident” women.”

What I found most illuminating about this entire exercise in probably eventuality, is that someone out there seems to think that Gerard Butler has a “type.” Unless of course, by “type” they actually mean “female”, although perhaps that still may not be casting the net wide enough to encompass the scope of that which is the sheer volume of Hollywood booty that Butler has allegedly tapped. Take a minute, grab a couple of Valtrex and meet me back here for the rundown of some go Butler’s alleged conquests. And those are just the ones that are fairly easy to tease-out on the internet. I’m sure there are plenty more high-profile people that have enjoyed The Butler who did not feel the need to pull a Brandi Glanville and slip it to the press for attention. However, there is one particular hook-up of Butler’s that I think is worth mentioning. This story dates back to the Coachella Music Festival in 2012, and by all accounts, it’s a real belter. Here is how the online gossip mag The Superficial reported it at the time.

Butler led his mystery brunette out into the open air for a seductive slow dance in an empty patch of pavement. “The two were grinding like they were at a middle school dance,” says our spy. “He didn’t seem to care who was watching.” After their spin, our spy watched Butler accompany his dance partner to the Porta-Potties before they returned to the carnival-themed bash.

Porta-Potty sex. You simply cannot write this stuff any better.

If Rita is really serious about keeping this guy around, maybe she should go out and get herself a bottle of chemical toilet cologne to dab behind her ear. And, you know…other places.