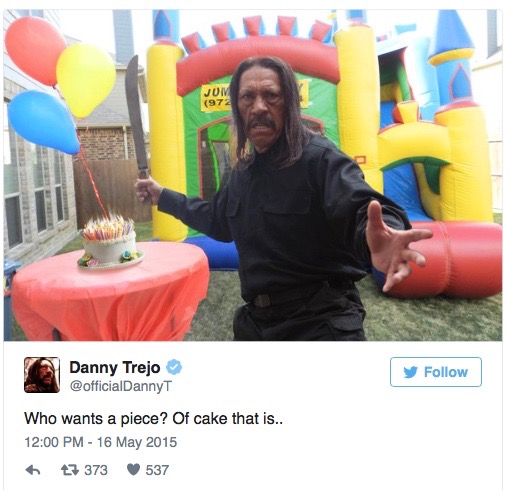 There are always these tabloid items claiming that celebrities are “just like us!” It’s always a little hard to swallow this type of rhetoric – I always think to myself “sure, if only I had millions in the bank, a private jet, kajillions of social media followers, and the ability to pay for and/or do whatever I pleased….sure, they’re just like me.”

However, I will concede that once in a while, a celebrity Tweets something out that resonates so well on just a basic human level that you can’t help but smile. Some of the time, it’s even intentional. Here, I’ve scoured the internet and revisited some celebrity tweets past and present that were simple, succinct, and undeniably funny. I always marvel any time I find myself agreeing with something Kanye says, but this one had that undercurrent of mundane, everyday life to it that made me laugh out loud. Being on a plane, space is always at a premium, and we frequent travelers (yes, even those who travel first class like Kanye undoubtedly does) often have a “formula” for how we like our small personal plane space to be. Something like a water bottle can really mess with your chi, trust me.

Zayn Malik – Zen and the Art of Walmart While celebrities are certainly not strangers to the fine art of making even the most mundane of daily activities sound like an exercise in portentous exclusivity, I freely admit here that I would have never guessed that trip to Walmart would be lofty enough to quality for the zen-like phraseology that is has been given in Zayn Malik’s tweet. I am giving him a pass on this one, choosing very firmly to believe that this was done tongue-in-cheek.

Whether it’s spelling, spacing, punctuation, or just good old word usage, this brainy tweet from Justin Bieber has a little something for everyone, and really, it speaks for itself, so I will refrain from further comment.

Donald Trump – State of the Twilight Address (among others) At some point, a bunch of white guys got together and decided that this guy’s extremely important opinions would make for good presidential material. Donald Trump telling anyone to “be smart”is like telling Typhoid Mary that it’s fine if she wants to go prepare lunch for the house guests and no, she doesn’t need to wash her hands first.  Of only this guy would have stuck to what he knows, reality TV and opining on the love lives of the cast of Twilight…

You know that this one is all talk. 50 Cent is obviously covering his rear end just in case someone saw him taking out the trash. Because we all know that if he spoke this way to his grandma’s face, she would grab him by the ear and whoop his disrespectful ass right into shape. I’m guessing that’s exactly what happened when she inevitably saw this tweet.

Lindsay Lohan – “Social Media, You All Look Alike to Me”

At the time, I considered this tweet, Lindsay’s first, to be somewhat of an oracle for how her relationship with Twitter would play-out. I was not wrong. It’s been five years, and we are still rolling downhill and picking up speed.

That time when Kim Kardashian tried to convince us that she was a surfer by installing the iSurfer App into her phone and allowing it to translate everyday speech into cool, surfer-speak.

Aaaaaaah! So that’s why he just kind of sat there, looking stunned and unsure of what to do next when that secret service guy whispered into his ear as he was reading to that school group! It all makes sense now.

Actually, I sort of prefer Steve Carell’s reading of the line in the movie Anchorman …”I love lamp”, but hey…it’s a good effort.

Danny Trejo – Has His Cake and Eats It Danny Trejo, gifted character actor, activist, and all-around cool guy, could frighten even the most brittle of diabetics into eating the whole cake, candles included.

Well, it’s likely that he wasn’t brought along as an Olympic swimmer because he was winning a lot of spelling bees at his elementary school, but I’m guessing that he wishes he would have been armed with a pair of “siccors” that night in Rio when he got held up at gunpoint….oh, wait….