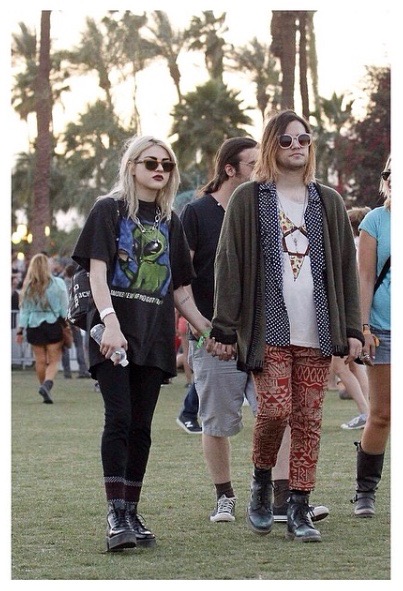 I knew it. A while back,  when I wrote about Frances Bean Cobain’s divorce from musician Isaiah Silva, I couldn’t help but notice the eerie parallel between the way Silva seemed so…”stage directed” – it was like he had styled himself to look, act, and even photograph exactly like Curt Cobain, right down to the haircolor and fuzzy cardigans. I remember remarking at the time that I hoped that this rather vigorous fanboy approach was coming from a place of reverence and not one of opportunism.

But guess what? He’s a opportunist scumbag.

Apparently after Frances ended the relationship a few months ago, despite our hopes to the contrary, there has been nothing but drama. According to TMZ, the LAPD needed to be called just to keep the peace when she tried to move her belongings out of their LA home, apparently spurring Silva on to do the unthinkable. TMZ broke the story early this week.

The multi-million dollar guitar famously owned by Kurt Cobain — the last one he played before killing himself — is at the center of Frances Bean Cobain’s nasty divorce. Frances’ estranged hubby, Isaiah Silva, claims she gave him Kurt’s Martin D-18E as a wedding present. It’s the same instrument the Nirvana frontman famously strummed during his epic “MTV Unplugged” performance.

The acoustic-electric is something of a holy grail for Nirvana fans. For starters, only about 300 were made before Martin discontinued the model. Kurt, who was left-handed, had the bridge and nut replaced so he could play it upside down.

Francis denies giving Isaiah the guitar, and wants it back, with good reason. It was once insured for $1 million and experts now think it’s worth several million bucks. So it turns out that Silva isn’t just a guy who really, really, really (like, Zoolander really) likes Nirvana and wanted to pattern his entire sartorial game after them, right down to marrying the daughter of the former frontman. No, it turns out that in addition to being a weapons-grade fanboy, Silva is apparently also an opportunist. During this whole divorce mess, Frances Bean has always stated that she would be open to the idea of paying Silva some spousal support to Silva to enable him to get set-up independent of her and her 450-million state (which she has made abundantly clear he will never see), but apparently that is not good enough for Nirvana’s Creepiest Fanboy.

While these two are fairly young and impetuous, I have pretty serious doubts that Frances Bean would have “given-away” her father’s guitar as a “wedding gift”. However, even if she had, the right thing to do would be for him to give it back. Do you hear me Silva, you inauthentic, derivative, coattail-riding weasel-boy!?

As TMZ pointed-out, Kurt Cobain was famously left-handed, so unless Silva is similarly left-handed (and I suppose with the level of commitment he has shown to emulating Cobain, he has probably learned to play left-handed as well), the guitar would not even be an instrument he would be able to play. This is a guy who is either after her money, or worse yet, upset that the relationship has ended and is trying to use this instrument as some kind of leverage or bargaining chip in order to assert himself. Either way, it looks like Frances Bean is going to have to head for the court system in Los Angeles to sort this mess out. However, apparently it’s not all bad news for Frances Bean. As her relationship was ending with her husband, she seems to be building bridges with another broken relationship in her life – the one with her mother. Frances Bean and Courtney Love were spotted shopping in London in the days after Bean’s divorce announcement, which in effect has ended a six-year estrangement that began when custody of Bean was temporarily awarded to Kurt’s mother Wendy and sister Kimberly when Love’s fitness to parent came into question. Will this newfound relationship last? Who knows, but in the days to come, Frances Bean is going to certainly need all of the support she can get as she wages war against her opportunistic ex. Bean, who has always had a pretty good head on her shoulders, will likely prevail, and now with this latest ‘guitar war” development breaking, I think it’s safe to say that she has the entirely of the internet on her side. We wish her luck.