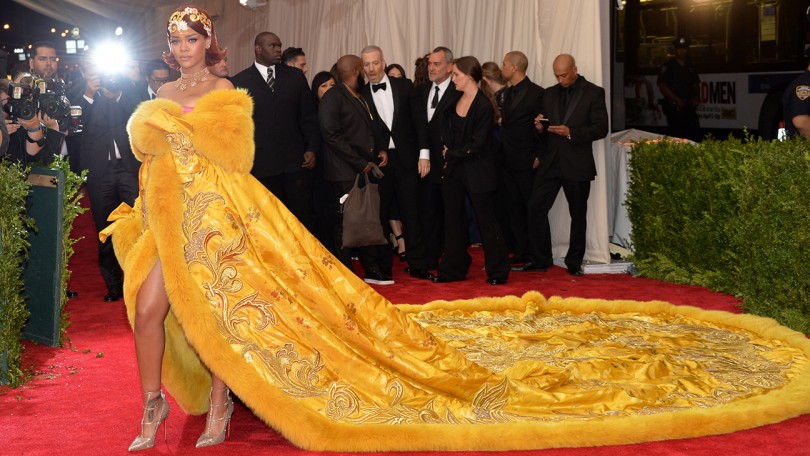 Not so long ago, The Oscars was the event that everyone looked to for their aspirational fashion dreams;  everyone who followed fashion (either from the comfort of their own homes via television and magazines or in live attendance at the event itself)  payed close attention to the Oscars red carpet, keeping their fingers crossed that they would not fall afoul of the late, great Joan River’s Worst Dressed List. However, the times, they are a changin’, because over the past several years, there appears to be a new sartorial sheriff in town – The Met Gala.

The Met Gala is officially New York City’s Metropolitan Museum of Art’s Annual Fundraiser for their Costume Institute. Unofficially, it is the social fashion event of the year, and the event that is probably more studded with celebrities than anything the film industry will serve-up at any point during the year. The Costume Institute launches an annual exhibition, and the met Gala, which this year falls on the 2and of May, celebrates the launch of this exhibition  with a gala theme that corresponds with the exhibition itself.  The invitees are urged to observe (however loosely) the theme of the evening as per the dress code, and any and all forms of creative (if not downright extreme) expression are not only allowed, but encouraged. To a point. I hear Madonna once got turned-away…or maybe just not invited, but I digress.

In my opinion, the Met Gala is one of the most fun events of the year for fashion lovers, and there is the added benefit of not having to sit through tedious speeches by self-important award-winners while they thank everything and everyone who they’ve ever had contact with. The event is simply a pure expression of joy and delight in dressing, and it just so happens to also benefit a really great artistic cause.

For all of this, there is first and foremost one person to thank – American Vogue Magazine’s Editor-in-Chief Anna Wintour. Wintour, who has a reputation for being “the scariest woman in fashion”, has been at the helm of he Gala for a long time now, and every year, it seems to increase in scope, ambition, and popularity. So much so, that last year, Wintour allowed a documentary camera crew into the fold to film the hullabaloo in the weeks leading-up to the event. That film, titled The First Monday in May,  is being launched on the 16th of April (next week) at the TriBeCa Film Festival. You can view the trailer here.

Personally, I cannot wait to see this film. As a dedicated fashionphile and writer of all things sartorial, I love this kind of “inside look” stuff, and there is just something about the sort of closed-up world of Vogue in particular that feels a little extra voyeuristic. The New York Post recently did a piece on this exact same thing, and they gave us a few sneaky snippets from the film (they certainly don’t give a lot away in the trial, do they?). Here are some of the highlights from what happened in the lead-up to last year’s gala, as told to the New York Post by Vogue’s Head of Events, Stephanie winston Wolkoff. (They always have three names, don’t they?)

Rihanna performed at last year’s Met Gala and she demanded twice as much money as any artist ever has. Apparently it was so much money that the matter that was turned over to Wintour to handle.

To this day, the public is unaware of how much Rihanna was paid for her performance, so the secret must be closely-guarded by Vogue staffers under penalty of death.

Another Vogue employee reported  that Wintour banned parsley from being served at the party “because you don’t want that stuck in your teeth.” Onions and garlic (bad breath) were also banned, and appetizers like bruschetta were not allowed because “It can fall easily on your gown.”

While this sounds completely petty and fashion-world silly, I totally get it. I am always terrified when I am wearing some lovely, silk concoction in a pale shade, and I am handed a canapé that looks like at any moment, it may slide off the toast point and onto my pristine silk dress. If the fashion world can’t worry about things like this, who can?

At one point in the documentary, Anna and her staff are complaining about a particularly bad table with Anna saying there’s “no celeb” at it and she’s told there’s only “Chloë Sevigny and Solange Knowles.” Later, Sevigny looks disappointed with her table assignment and tells the camera, “Just like high school.”

Indeed Ms. Sevigny…indeed. But that’s why we love it.