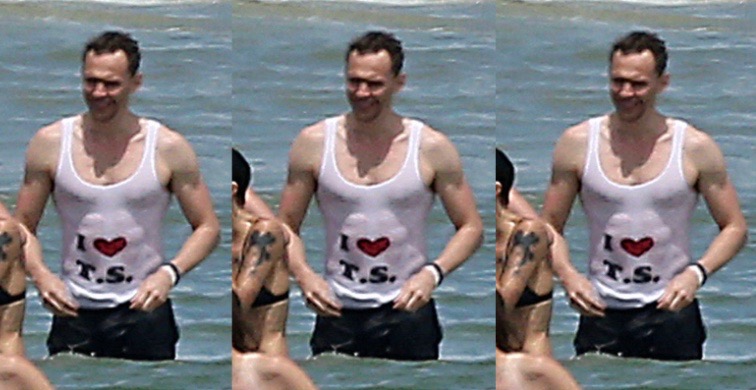 See that look on Tom Hiddleston’s face? That, dear readers, is a man who is thinking to himself, “just what in the hell have I done?”

You knew it was going to happen. It couldn’t not happen (and yes, I am aware that’s a double negative, but it’s arty, so leave me alone).  And now it’s happening, so now I have to talk about it. It appears as though the first official bit of Hiddleston/Swift backlash (and by “official”,  I mean the kind that is going to cost someone a chunk of cash) has begun. Like I said, it was always going to happen. You simply cannot parade around like some hormonal pre-teen in heat for a month without pause and expect people not to develop a bad taste in their mouths. And speaking of taste, if this backlash really gets going, Tom Hiddleston is going to have to get very used to the taste of Ramen Noodles, because that’s all he is going to be able to afford once all of the work and sponsorships dry up. But I digress. Let me back up a bit.

You may remember that not so long ago, Hiddleston did a spread for W magazine that was basically him standing around trying to look windswept and interesting in a pair of tight whites. While I get that they were going for a no-holds-barred, sexy kind of a vibe, the result was cringe worthy and embarrassing. Here, have a look.

Okay, I take it back, they’re not tight whites, they’re more like hospital-grade boxers, which is actually worse.

Look, I get it…I do. Hiddleston has a smoking bod, and he is sexy as hell, but what the “stylists” at W were thinking putting those insane asylum underpants on Loki I will never know. I cannot even stop looking at them, they’re that bad. They don’t even fit! They’re all bunched-up and pulling and sort of….well, you know.

Anyway, someone from the Secret Underground Underpants Collective Network (SUUCK) must have seen underpants bat signal go up over the city, because at one point, apparently the real underpants kingpin, Armani, had expressed an interest in Hiddleston possibly replacing his girlfriend’s cast-off boyfriend Calvin Harris as the new “face” (insert your own joke here) of suave, dashing, erudite, European underpants. You know, the kind guys might actually want to wear. Mind you, this was always a rumor, but a plausible one nonetheless. After all, Calvin Harris joined Armani right about when he started with Swift, and as soon as they broke up, the contract ended, and suddenly there is a rumor that Hiddleston is next in line to the tighty-whitey throne? Hmm.

Except something jolted Armani from it’s boxer-inspired reverie. The Daily Mirror had the story.

Tom Hiddleston’s brief hopes of becoming the face of Armani have hit the rocks already – after his embarrassing shows of affection for new love Taylor Swift. The Night Manager star was being considered as a replacement for DJ Calvin Harris , who promoted the Italian label’s winter collection. But sources say fashion bosses have gone cold on Hiddleston after his recent run of cringeworthy public displays of affection. The 35-year-old actor began dating Shake It Off singer Swift just weeks after her split from Harris – and executives now fear they could be seen to be cashing in on the break-up.

A US fashion source said: “Tom was on the shortlist as they examined who could take over from Calvin. Obviously with Tom now being Taylor’s other half and the Calvin past deal, it would generate huge media coverage and headlines. But Armani see themselves as classier than that and think that a rising sports star may suit their current needs better. Armani would hate to be seen as getting PR for their brand by riding on Taylor Swift’s coat tails, so Tom will not get the job. So there it is. Let this be a cautionary tale to all celebs who might be tempted to overplay their hand at the PR game and “curate” every single detail that gets released. All Swift and Hiddleston would have had to do was keep it low key, acknowledge the relationship, and maybe even release a few grainy iPhone photos to satiate those of us who can smell blood in the water from across the pond. But instead they went for the three-ring circus, and now they are both paying the price. As the old Tom Hiddleston used to say, as he stood before a glowing fire decked-out in heritage tweed and sipping from an 18 year old Scotch, Shakespeare’s Collected Works in hand…

Listen to The Bard Tom…before it’s too late.