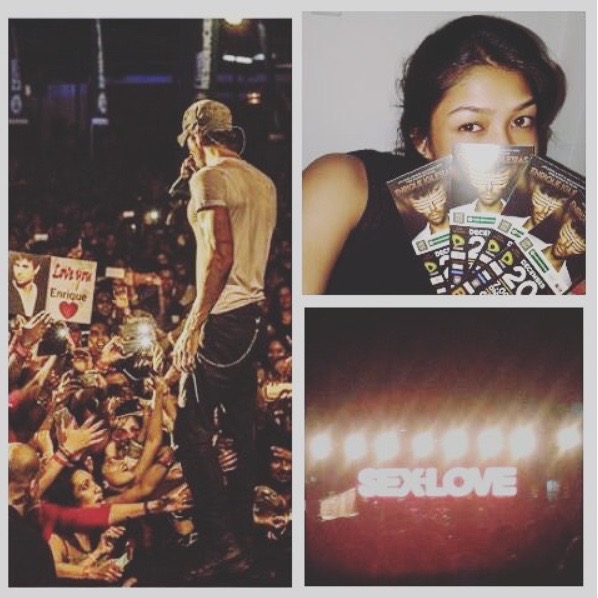 In a piece of news that sounds a lot like something that might have happened back in 1956, this week singer and heartthrob extraordinaire Enrique Iglesias caused a bit of a thing in Sri Lanka when his overwhelmingly manly hotness got the better of some female concertgoers, inspiring them to remove their brassieres and throw them on the stage.

Meanwhile, in Wales, Tom Jones is sipping a hoppy Welsh microbrew and saying “What’s the big deal!? That happens to me all the time. Or at least, it used to…” While this type of thing may just seem like par for the course to many of us Westerners, in Sri Lanka, Women are not as free culturally to throw their undergarments at crooning pop stars (apparently even the really, super-duper hot ones), and a bit of a kerfuffle ensued. The Sri-Lankan internet was ablaze with criticism of the women (although I hasten to add, there was a fair amount of support as well), but it wasn’t until the Sri Lankan President himself decided to get involved that things really took a turn for the weird. And by weird, I suppose we mean medieval.

This is most uncivilised behaviour that goes against our culture. I don’t advocate that these uncivilised women who removed their brassieres should be beaten with toxic stingray tails, but those who organised such an event should be. These indecent concerts should never receive authorisation again in Sri Lanka

Toxic stingray tails!? Is this a thing!?

A quick internet search tells us that yes. It is actually indeed a thing. Whipping people with toxic stingray tails is indeed actually a thing. Apparently it’s something that still goes on; it has recently been used to keep Burmese slave fishermen in line while they were forced to fish for seafood that very likely, is in your local grocery store as we speak. Apparently there is also a Filipino superstition that dictates that the tail of the stingray, referred to as a “buntot pagi”, is very effective at repelling ghosts and witches (!?), and is also sometimes used in certain martial arts practices. One martial artist named Leslie Buck Jr. even describes it in detail on his blog.

While living, the stingray fights it’s predators with a venom or neurotoxin that is extremely painful and sometimes lethal to predators and humans alike. The stingray’s neurotoxin is transmitted by puncturing an attacker with one or more barbs located on the stingray’s tail.

The neurotoxin remains in the stingray’s tail skin even as it dries. When whipping an opponent, the stingray tail will break the opponents skin and thereby deliver its neurotoxin. Although the neurotoxin is likely more concentrated when delivered from a live stingray, it is quite powerful nonetheless. In addition to intense local pain that can last up to two days, the neurotoxin can cause chills, fever, dizziness, nausea, vomiting, diarrhea, fainting, tremors, seizures, paralysis, an elevated heart rate, decreased blood pressure and, rarely, even death. Wounds often take longer to heal as infection is common and can, if untreated, result in gangrene or tetanus.

So yep. Toxic stingray tails are definitely a thing. And more worryingly, it’s a thing that the president of Sri Lanka not only seems to know all about, but seems more than willing to employ as payback for some behaviour that has been deemed “indecent” at a public concert.

While all of this sounds remarkably medieval to the Western ear, I suppose context is key. It wasn’t that long ago (1956)  that Elvis appeared on the Ed Sullivan show in Los Angeles, and performed “Hound Dog”. His signature dance moves (gyrating his hips all loosey-goosey while playing and singing), sent the network, as well as much of post World War II America, into an instant froth. Those hips! That gyrating pelvis! It was all too much for them in 1956, and I believe then too, claims of “indecency” were batted-aroound while the more conservative segment of the population clutched its pearls in righteous indignation.

Luckily for Elvis, there was no mention of stingray tails.

So what does it all mean? Does this mean that the strange, somewhat violent, and definitely anti-feminist slant of this story is actually Sri Lanka’s “Elvis dance?” Are they embarking upon the long, slow climb to a more modern sensibility? Perhaps you could argue that…although it appears that when it comes to freedom of expression, Sri Lanka may indeed have a long way to go. Doubly so if you happen to have a uterus.

The show’s organizers, who absorbed the lion’s share of the president’s wrath, had only this to say about the event.

Although we know an apology or refund cannot fully satiate your disappointment, we wish to reiterate that we remain fully committed to all of you and our country.

A full and thorough internal inquiry is ongoing into all areas of concern.

A full and thorough inquiry. Bring out the lingerie CSI unit. There’s a free-floating brassiere on the stage.