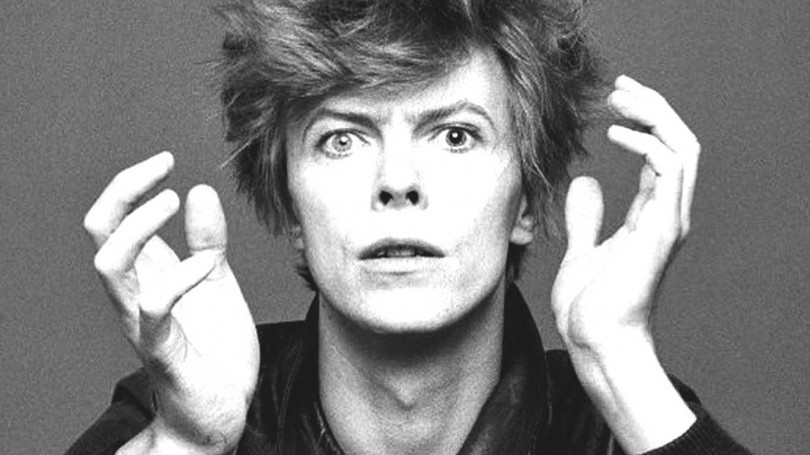 HAPPY BIRTHDAY DAVID BOWIE AND ★ “That’s the message that I sent…” Why is this man so happy? Is it because it‘s his 69th birthday or that he has released his 28th studio album today and it’s a corker? Who knows, but we’re sure you’ll want to join us in congratulating him on both. Many happy returns of the day to David Bowie and ★ (Fashion fans may like to note that our man is wearing Thom Browne) #Blackstar #imablackstar #BlackstarAlbum #BowieBirthday #BowieBrowne

David Bowie has died at age 69 after an 18-month battle with cancer. The news broke just minutes after Hollywood left the Golden Globe Awards ceremony in Los Angeles. “David Bowie died peacefully today surrounded by his family,” said a statement posted to his Facebook page. Bowie’s publicist confirmed that Bowie died of cancer, which he kept secret from the public. Bowie is survived by an adult son, Duncan Jones, and a teenage daughter Alexandra, his daughter with wife Iman. David Bowie and Iman had been married since 1992. Bowie’s first wife, Angela, was competing on the UK version of Big Brother and had been sealed off from the outside world for weeks. Producers told her off-camera, but she chose to stay on the show. Although the two were married for a decade, they had not seen each other for more than 30 years.

Bowie’s 25th and final album, Blackstar, was released on Friday, which was also his birthday. It’s a heavily jazz-influenced album that was scheduled to be feted in a March appearance at Carnegie Hall, where other artists like the Roots and Cyndi Lauper were to perform in his honor. Bowie influenced every major musical artist today, including Madonna, Kanye West, and Lady Gaga. His impact transcended the pop spectrum, with classical composer Phillip Glass basing two symphonies on his albums “Low” and “Heroes.”

Bowie’s influence went beyond music and the arts. The German Foreign Ministry thanked him for helping to unify East and West Germany. “Good-bye, David Bowie. You are now among ‪#Heroes. Thank you for helping to bring down the ‪#wall.” Bowie had lived in West Berlin for a while, where he soaked in the sounds of bands like Kraftwerk.

The rebel Bowie twice turned down honors from the Queen. In 2002, he was offered the Commander of the Order of the British Empire (CBE) title, which the Queen awards to those who have made “a distinguished, innovative contribution to any area” of British life. Bowie explained he had no idea what he had done that merited such an award. A year later the Queen wanted to knight him, but again Bowie refused such an honor. Today British Prime Minister David Cameron observed, “I grew up listening to and watching the pop genius David Bowie. He was a master of re-invention, who kept getting it right. A huge loss.”

In the 1970s, Bowie shocked everyone by admitting he was bisexual, long before it was deemed acceptable to do so. Mick Jagger has admitted to having an affair with Bowie. Bowie’s gender-defying persona Ziggy Stardust influenced decades of gay, lesbian and trans people, who saw a kindred spirit. Other oddball celebrities like Tilda Swinton, who resembles Bowie, were inspired by him. Swinton recalled in 2014 discovering his record as a teenager and believing Bowie had to be her cousin. The two later collaborated on a video. Bowie collaborator and pop icon Iggy Pop tweeted, “David’s friendship was the light of my life. I never met such a brilliant person. He was the best there is.” Paul McCartney wrote:

Very sad news to wake up to on this raining morning. David was a great star and I treasure the moments we had together. His music played a very strong part in British musical history and I’m proud to think of the huge influence he has had on people all around the world. “I send my deepest sympathies to his family and will always remember the great laughs we had through the years. His star will shine in the sky forever.

Yoko Ono shared her remembrance on Facebook. “John and David respected each other. They were well matched in intellect and talent. As John and I had very few friends we felt David was as close as family. After John died, David was always there for Sean and me. When Sean was at boarding school in Switzerland, David would pick him up and take him on trips to museums and let Sean hang out at his recording studio in Geneva. For Sean this is losing another father figure. It will be hard for him, I know. But we have some sweet memories which will stay with us forever.”

Madonna said “Im Devastated! This great Artist changed my life! First concert i ever saw in Detroit! R.IP. ‪#rebelheart” and “Talented . Unique. Genius. Game Changer. The Man who Fell to Earth. Your Spirit Lives on Forever!”

Kanye West said “David Bowie was one of my most important inspirations, so fearless, so creative, he gave us magic for a lifetime.”

Josh Groban wrote, “He never seemed of this earth. Now he’s left it. He bent rules, gender, genres, and our minds. RIP David Bowie. One. Of. A. Kind.”

Frequent collaborator Brian Eno had been discussing recording another album together when he got an email from David a week ago, which said the following: “Thank you for our good times Brian, they will never rot.” Eno said he now realizes his friend was saying goodbye. The email was signed, “Dawn.”

Ricky Gervais, who spent three hours as the snarky host of the Golden Globes, dropped his act on Twitter to fete Bowie: “I just lost a hero. RIP David Bowie.” Bowie’s officially Instagram had posted a photo of the two last month.

BOWIE GIVES SLOUGH THE THUMBS UP “No one’s bloody laughing…” David Brent of The Office is set to return to cinema screens in August next year with his new feature film, Life On The Road. Creator of the character, Ricky Gervais (who also played Brent in the original TV series), has been speaking to NICK LEVINE at the NME about the film, the musical content and how Bowie responded to the David Brent classic, Slough. See DavidBowie.com for more #BowieGervais #DavidBrent #RickyGervais #Slough