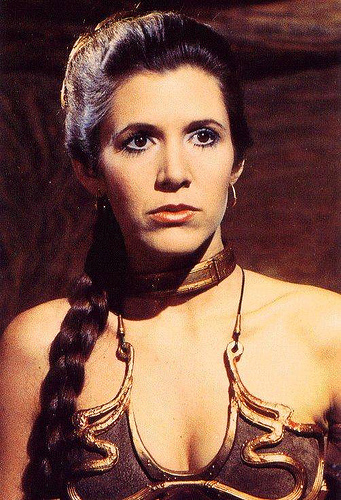 Carrie Fisher Says Don’t Judge Me by My Age

When actress Amy Schumer’s show Inside Amy Schumer featured a sketch about a woman’s “Last F—able Day,” she was critizing the standards of Hollywood, and used actresses Julia Louis-Dreyfus, Tina Fey and Patricia Arquette to illustrate her point that there’s a “day the media decides you are no longer “believably f—able.” Now a Hollywood legend, the Hollywood it girl, and a supermodel are speaking out ageism in the industry.

Carrie Fisher, also known as Princess Leia of the Star Wars franchise, has aged since the release of the 1970’s and 1980’s, as has Harrison Ford, also a star of the franchise. But for some ridiculous reason, Carrie Fisher has suffered the brute of the criticism of her looks, as “fans” point out how her body has changed since she last wore that infamous gold bikini. Critics, aka trolls on Twitter, had said they wanted their “money back” since the character didn’t age well. One said the movie was like a “resthome.”

First off, the movie was set 30 years later from the previous other Star Wars movies, so aging is to be expected, making Princess Leia actually be around age 55. Look at Darth Vader, the Force isn’t a magical restorative for age and body!  Second, Carrie points out that you shouldn’t judge her by her body, and I’d agree – judge her for her body of work. She tweeted to the haters “Youth and beauty are not accomplishments, they’re the temporary happy.”  She further added that “I identify more with who I feel myself to be than what I look like. Either way, am I obliged to entertain you with my appearance?”  This is an interesting point, since Harrison Ford, starred in Indiana Jones and the Kingdom of the Crystal Skull in, even in his 60’s. Can we point out that he is 73, while Fisher is 59? As a fellow Twitter user on the Internet pointed out, “Men in Hollywood don’t age better than women, they’re just allowed to age.”   To sum up: 2 points to the House of Organa and 0 points to the House of the Trolls! Fisher continues to tweet about Hollywood’s beauty standards.

From the Galaxies to the Red Room: Dakota Johnson Says Hollywood Ageism is Brutal Dakota Johnson made her mark playing Anastasia Steele in the highly-anticipated film adaptation of 50 Shades of Grey. Her mother, Melanie Griffith, and grandmother, Tippi Hedren, both had big careers in their time, but now have faded from the big screen. For those of you who are younger, Hedren made her debut in Hitchcock’s box office hit The Birds, and Melanie Griffith won a Golden Globe for her role in Working Girl. Johnson is only 26, but already she’s feeling the brunt of Hollywood expectation to be young and pretty to keep working – no matter how talented you may be. She told British Vogue:

feeling of not being wanted. It’s absurd and cut-throat. Whenever I have downtime, I’m unsure that I will ever work again. I don’t know what it is, but it’s a definite thing that happens to me.”

She isn’t wrong to think that either, because last year Maggie Gyllenhal made headlines about how she was told she was “too old” to play a romantic lead opposite an actor who was 55. At the time, she was 37! Amy Schumer’s sketch mentioned above speaks about how Hollywood decides that women in their 30’s and 40’s are quickly decided to no longer be the girlfriend, but are instead are put into movies with vague titles like “She Means Well” and “Whatever it Takes,” those type of feel-good movies your mom likes.  Johnson has at least two more 50 Shades of Grey movies to go, and I’m sure she’ll be just as hot as she was in the first movie.

How far does the push for women to stay hot and young-looking go? Even a supermodel, Rachel Hunter, has felt pressured to go under the knife. Hunter, who has two children with ex-husband Rod Stewart, who hasn’t aged well, recently did a docu-series for Ovation about the world’s standards of beauty, and saw that Hollywood and America have the idea that young is beautiful and that’s that. Traveling around the world for the 13-episode series let her get rid of her insecurities. If a woman who is a former swimsuit cover model has bad feelings about her looks, Hollywood is definitely going the wrong way. But hey, I’m sure these ladies to can play a teacher or mother or even grandmother to one of Zac Efron’s characters one day.