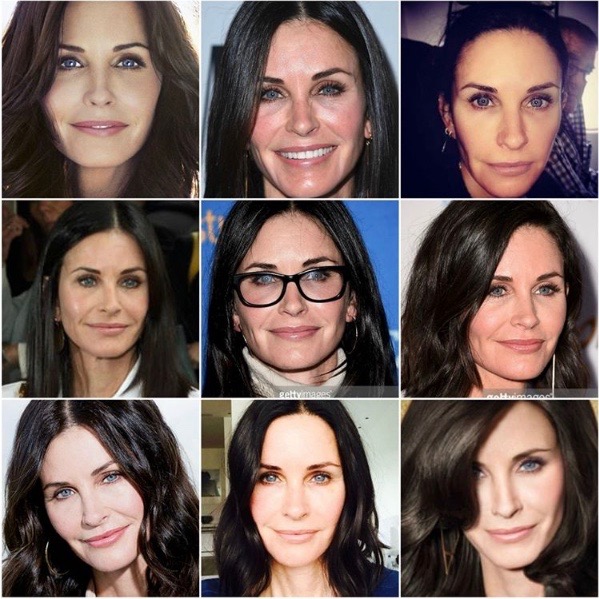 A few days ago, the new season of Running Wild with Bear Grylls started, and perhaps rather unexpectedly, Courtney Cox was his guest. If you’re unfamiliar with Bear Grylls and his show, he is an ex-special forces survivalist who puts famous people through their paces by taking them into extreme environments and showing them exactly what it takes to survive in the wild. To say that they show is a popular one would be an understatement; last season, he even cooked and ate a wild salmon with none other than POTUS himself, Barack Obama!

That said, I’ve never really thought of Courtney Cox as the outdoorsy type, but yet here she is, heading-up the premiere of the new season, clad in her GoreTex outdoor gear, supposedly ready for action. The premiere took place off of the cliffs of Ireland, so perhaps Courtney Cox’s newly-rekindled romance with Snow Patrol front man Johnny McDaid (who’s Irish – from Derry) has something to do with that.

Be that as it may, Cox showed-up for the gig, and was surprisingly candid about not only her relationship with McDaid, but also such hot topics as the pitfalls of celebrity, ageing in Hollywood, and perhaps most interestingly from a gossip writer’s standpoint, her own cosmetic surgeries that she has had over the years. To me, this was a bit of a revelation, as more often than not, celebrities treat their very obvious changing physical appearances with anything but the kind of point-blank honesty that Cox showed with Grylls. Normally, we’re treated to something more along the lines of “I drink a lot of water and do yoga.”

“I think there’s a pressure to maintain [your looks], not just because of fame, but just, you know, being a woman in this business. Getting older has not been…I don’t think it’s the easiest thing. But I have learned lessons. You know, I think I was trying to keep up with getting older, trying to chase that…you know, it’s something you can’t keep up with. So, the more you relax into it and the less I try…’cause sometimes you find yourself trying and then you look at a picture of yourself and go, ‘Oh, God.’ Like, you look horrible. I have done things that I regret, and luckily they’re things that dissolve and go away. So, um, that’s good, because it’s not always been my best look. So, now I just have a new motto: ‘Just let it be.’ While I’m not entirely sold on her claim that she has done only things that “dissolve and go away” (her eyes look a lot smaller than they used to and the corners of her mouth look “pulled”), there’s no doubt that Cox has dabbled with things like fillers and Botox – the evidence is right in front of anyone who takes the time to scroll-back and look at some of her older photos.  However, her honesty in sharing (at least part of) her fear of ageing and trying to stay frozen in a younger version of herself for the sake of Hollywood is downright refreshing. After all, Cox is 52 years old now- perhaps we all need a small reminder now and again of what that really looks like.

Cosmetic surgery wasn’t the only thing that Cox opened-up about. She also spoke to Grylls about the breakup of her marriage with David Arquette (citing them as “such good friends”) and her on-again-off-again relationship with McDaid.

We were engaged for over a year and then we broke up. There’s something about…you know, he’s from Ireland. And the way he regards love is precious. We have to treat it in a different way. It’s more special. You coddle it. So, I didn’t know how to regard love the way he does. And it definitely made a lot of mistakes that I see, whether it’s codependency or people-pleasing. I didn’t know how to bring it in. It was always external. I definitely have learned a lot, and no matter what, I will be a better person from that breakup, even though it was so brutal.

Not entirely sure exactly what that means, except that it seems to be some sort of acknowledgement of a failure on her part? I do however take issue with her inference that somehow is treating love as “precious” has something to do with the fact that he is Irish. That likely has more to do with the fact that he is, and has not been, part of the Hollywood rat race than anything else. However, Cox seems to have gone through some kind of personal growth spurt, which she was more than willing to share with the rest of us. Sure, it’s a bit of an odd venue to choose a wilderness survival show to showcase one’s personal growth, but I guess when it comes to celebrities, we’ll take it any way we can get it.  At any rate, my gossip writer’s hat goes off to her for her honesty, even if I think that there is still a little bit of cosmetic tomfoolery going on with her face. After all,  you can’t expect a gal to go cold turkey, can you?