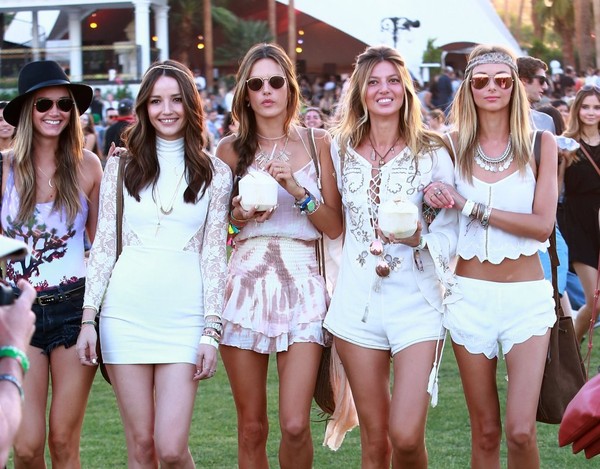 Remember the days when music festivals were for everybody, and not just trust fund babies posing as hippies and celebrities whose net worth exceeds that of all of the people you have ever met? I do. I remember the good old days – 1990s Seattle, when Pearl Jam took a stand against Ticketmaster for creating a monopoly on ticket sales when they bought out their only competitor, giving them the ability to jack ticket prices way, waaaaay up. That was 1994, and Pearl Jam actually sued Ticketmaster, demanding that their tickets not exceed $18.50 per head. Those were the good old days. I still love you Eddie Vedder!

However, as you might have guessed, the band sadly lost that battle, which is why in the year 2016, we are able to look at photographs of 20-something trust fund babies and “ageless” (ahem) celebrities strut their stuff at the Coachella music festival, where the most basic three-day pass will set you back $375, and that’s all before transportation, hotel, meals, and other incidental costs. Really, you’re probably going to need at least $1,500, all-in, and much, much more if you want to spend some time in the VIP areas. That is, if you can even get in.

Take this photo of Alessandra Ambrosia, for instance. She looks perfectly put-together for the occasion: serviceable brown suede booties, short cut-off denim shorts (which are a requirement at Coachella, by the way), bohemian jewellery, braids, rose-colored glasses (literally, and maybe figuratively too, who knows?), and a tropical print jacket in case the temperature drops. This is a great festival look; not too showy, cute, but not twee, not too heavy-handed with the whole hippie thing (we’ll get to that in a minute)…just right.

However, while you or I would probably have put a look like this together using things we already had in our closet, if not from the local Goodwill or vintage shop, Ms. Ambrosia has a little secret. That jacket? The one that is so insouciantly tied around her waist? Yeah, that jacket is Yves Saint Laurent, and it costs $2,690. I can’t speak for the rest of her look, but I’m guessing she didn’t get any of it at Goodwill.

Coachella has become such a hotbed of celebrity activity that the music is no longer the main attraction. Really, the festival has become more like the fashion industry’s sponsored summer barbecue; there are so many celebrities, models, and sons and daughters of privilege walking around the grounds of the festival that designers and mass-marketed brands alike have caught on, and started throwing their wares at anyone who might agree to wear them. Gone are the days of the ubiquitous Kate Moss inspired Wellies and fringe (except maybe at the UK’s Glastonbury, but that’s more out of weather-related necessity than anything), having been replaced with what has basically become one big neo-hippy catwalk show.

For the most part, it’s fun. I’m guessing that none of these celebrities would dare claim to be actual hippies – far from it. Most of them were driven there in a limo, and will have been staying in a five-starred, bottle-serviced, nothing-is-impossible resort. Really, authenticity is not what it’s all about; it’s about creating a mood. In the spirit of said mood, everyone appears to play by the same rules: cut-off denim, macrame, booties, fringe, rose-tinted, round, aviator, or heart-shaped sunglasses, braids, wreaths in the hair, bohemian everything…it’s all part of the fun. But every once in a while, there are those who cross the line; they go from creating a sartorial homage to the bohemian roots of summer music festivals to a full-on costume. And it’s kinda hilarious. Readers, I give you exhibit A: Ashley Greene. She appears to be employing nearly all of the Coachella fashion checklist items all at the same time, with her cohort to her left picking-up any of the ones that she may have accidentally overlooked; low-cut bodysuit, check. Fringe, check. Round glasses, check. Boho jewellery, check. The overall look is overworked, super-unflattering (those flattened boobs!), and in all honesty, a bit ridiculous. This is a look that gives us more “love for sale” than “free love”. Exhibit B is model Kendall Jenner, who employed her sense of bohemian style as only a Kardashian can. Calling this look over-the-top would actually be an insult to the truly over-the-top looks of the festival (see Exhibit A). That said, points-awarded to Jenner for actually (allegedly) wearing an actual vintage dress, but demerits for wearing one that looks like the doilies on the armchair of my Greek Nanna’s davenport. Although really, we shouldn’t be too hard on Kendall. After all, this is most likely the work of Monica Rose, stylist to the Kardashians. Since Hollywood Stylists are rumored to earn as high as $10,000 per day, we can rest assured that this trust fund bohemian Barbie look is probably a one-off.