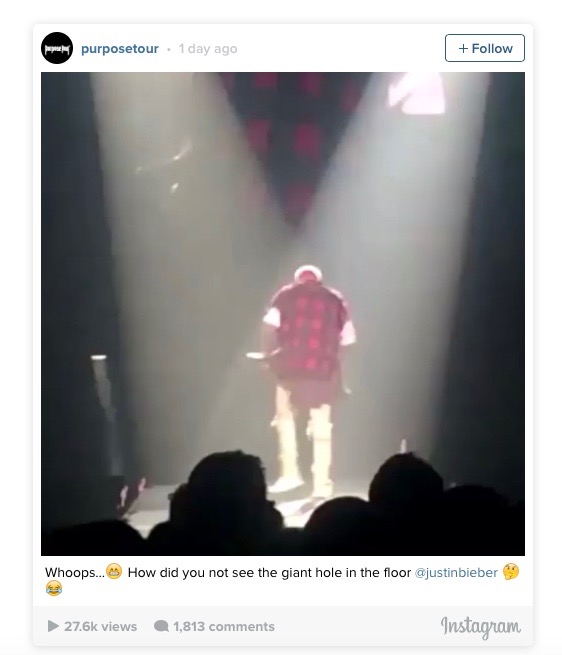 Okay, last week definitely wasn’t the best. There was yet another mass shooting in the USA that congress once again very proactively decided to address with a very stern “moment of silence”…you know,  instead of some actual meaningful legislation that might actually prevent these things from happening. But yeah, let’s all just sit quietly for a minute or two. That’ll help.

Then, as if to add insult to injury, the Internet’s boyfriend, Tom Hiddleston, decided to pass me over for the position of “new girlfriend” in favor of Taylor Swift.

Whatever, Tom. All this could have been yours.

But never mind, dear readers. Bygones, I say! After all, there is a silver lining to the rather ominous storm cloud of news items from last week – the fact that celebrities are still making asses of themselves all over the globe, providing endless entertainment for you and proving once again the old saying that Karma is not only real, she can be a real bitch sometimes.

This (admittedly rather grainy) photograph is of Justin Bieber falling through a stage trap door at a concert that he was performing in Saskatoon, Canada.  You can watch the entire video (taken by an astute concertgoer) on Instagram. Sure, maybe you might call it schadenfreude to laugh at The Prepubescent One’s hole-falling misfortune, but after all of the peacocking and posturing this wee menace has engaged in during the last few weeks (I’ll get to that in a minute), you just can’t help but feel that The Universe had just decided that enough was enough and sent him plummeting through that hole in the stage…hard. 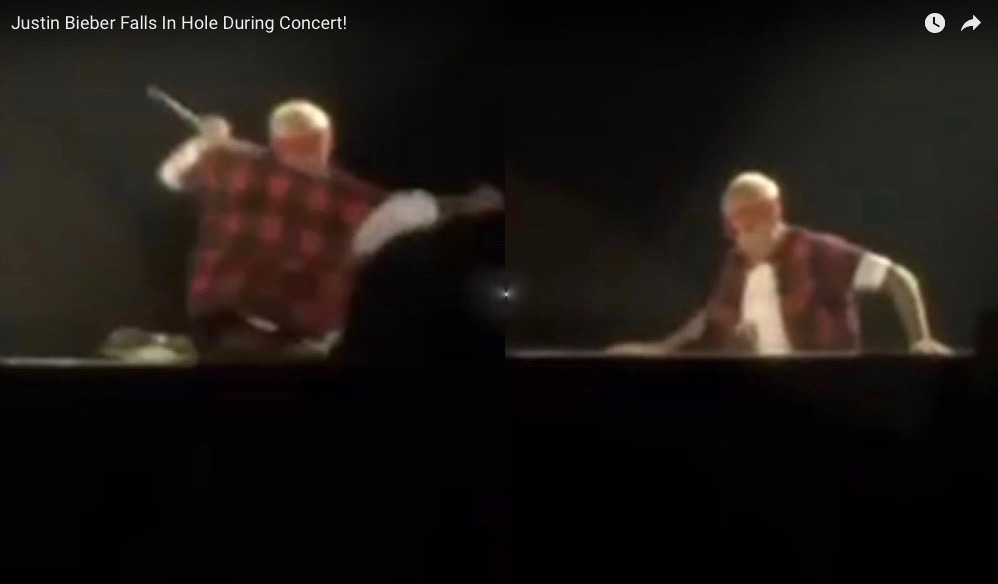 Don’t get me wrong, I don’t wish harm on anyone, Justin Bieber included. And if you watched that Instagram video, it looks like he really caught the edge of that trap door hard. Ow. However, just when I feel a twinge of sympathy for The Biebs, another news story comes out that makes me want to wash his entitled little mouth out with soap and send him to bed without his supper.

An example of such a news item is this story that came out about a week ago. Apparently, young Mr. Bieber got into a bout of fisticuffs outside of a hotel in Cleveland, Ohio. As the story goes (according to TMZ, who are usually the first to arrive at the feeding frenzy), the Biebs was in town for game 3 of the NBA finals, and after the game was chatting with (by which I guess I mean putting the moves on) a girl, who turned out to be there with another guy. Apparently the chatting went on a little longer than was comfortable for the guy, and he stepped in, at which point Bieber, ever the elocutionist, told the man that he would “f**k him up.”

To be fair to Bieber (did I just write that!?), he may have been a little on edge to begin with. ET had the following to say about the circumstances leading-up to the big brawl.

Biebs was hanging out outside the hotel, and had been getting harassed by people walking by (mostly guys making fun of him) and hounded for pictures, so he was a bit on edge. He had a friend about his size with him, and there was a bodyguard or two but he was kind of on his own, wandering around. Bodyguards only stepped in after Bieber hit the deck. The guy in my photo is the guy he fought and the girl is the girl he was talking to. The bodyguards broke it up and security cleared everyone out pretty quickly 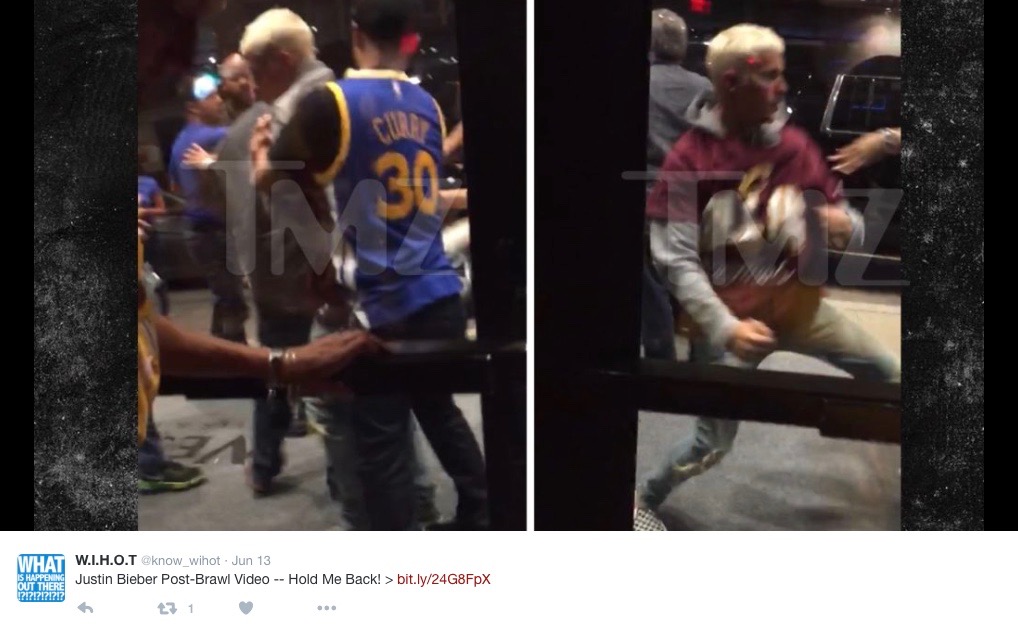 Is it wrong to admit that my favourite part of that ET writeup is the part that tells us that “the bodyguards only stepped-in after Bieber hit the deck.”

It’s almost as if even they’re tired of his shenanigans. You can almost see it – these two massive guys, sitting back watching their little twerp become more and more agitated, looking knowingly at each other, maybe even taking side bets as to how many seconds might elapse before he got taken out. I can almost see them standing there, arms crossed, filled with ennui for having to watch yet another unwinnable Bieber battle, but not really wanting to step-in and interfere until the little runt at least got taught a lesson about common courtesy, and not picking a fight with a guy there times your size. Right on guys.

So yes, for a second time in the month of June (although technically this would have been the first time since the fall through the trapdoor actually came after the brawl), Bieber found himself flat on his arse in public. Right where The Universe wants him, apparently.

But never fear dear readers (and you’re going to want to get your airsickness bags at the ready for this next bit, because the Biebs wants all of his “Beliebers” out there to know that he’s just fine. In fact, he’s m0re than just fine. He’s pretty. Here is what he posted to his Instagram in the immediate aftermath of the brawl. 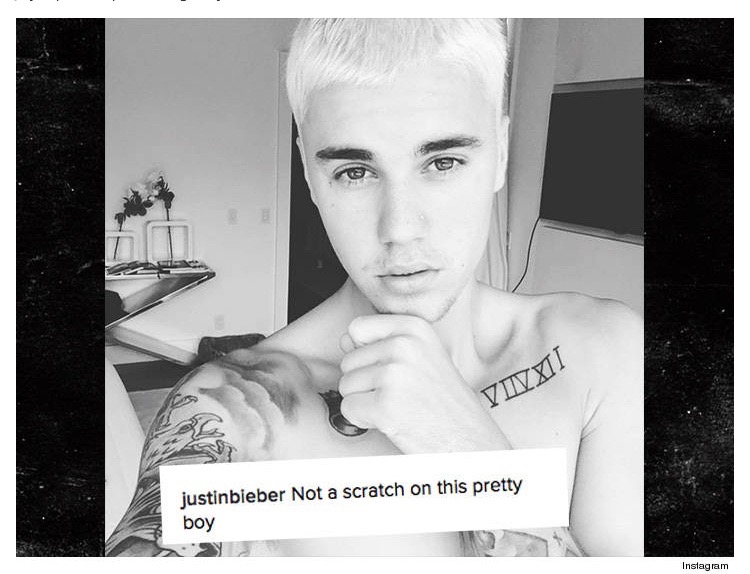 Of course, even King Bieber must have eventually realized the over-the-top nature of that Instagram, so he deleted it. But not before those of us who troll the internet for things like this got ahold of it.

Then he replaced it with this one, which had the rather ironic caption, “No hesitation.” 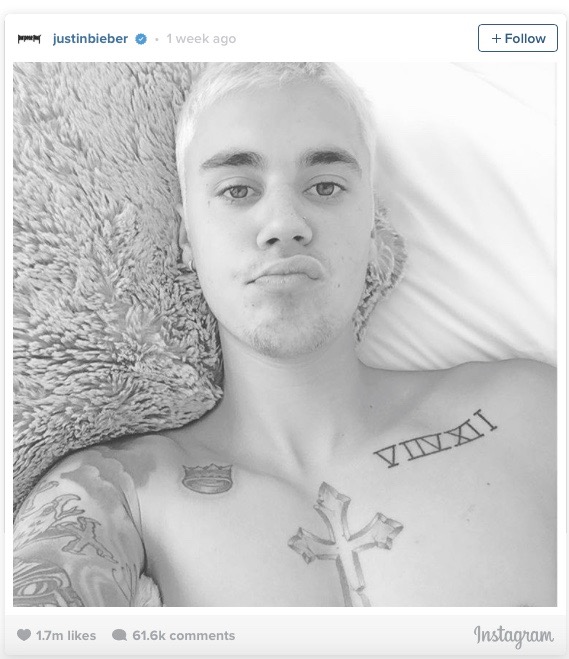 I’d like to just take this opportunity to relay to the Biebs that sometimes, a little “hesitation” is a good thing, and not just on Instagram. Take for instance, that crown tattoo on his right clavicle. A little hesitation before he told the guy to go ahead and give him the eensy-weensiest King of Tantrums tattoo would have served him well.

No, the only thing that appears to be hesitating for Biebs in this photo is the growth of his beard.