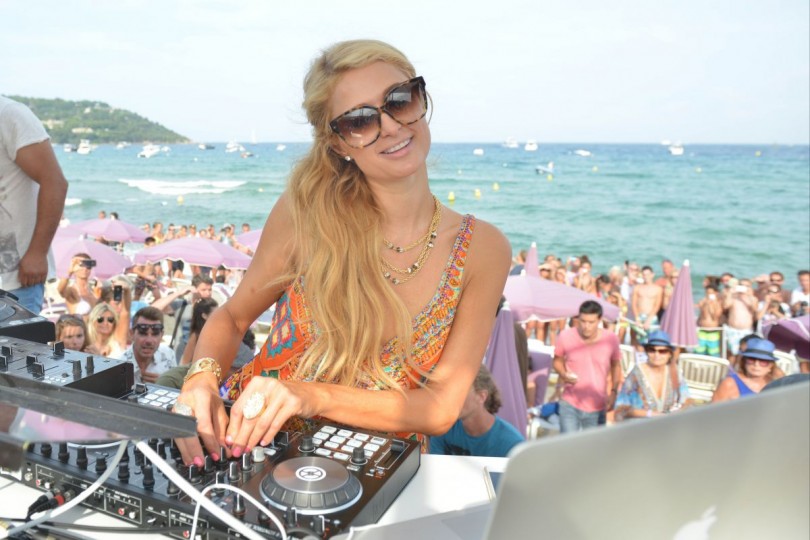 In any discussion you have about modern celebrities who are essentially famous for doing nothing, you cannot get away without mentioning Paris Hilton. Hilton was really the one who started it all, and this week, GQ magazine paid homage to this dubious achievement in a really interesting piece about modern celebrity culture and “appearance fees”. While we all know that celebrities get paid to school for certain products and have endorsement deals and whatnot, I never truly realized the kind of money that is changing-hands to lure these celebs into the commercial fold. It’s really and truly obscene.

But we’ll get to that in a minute. Here’s what GQ had to say about that I’m dubbing the “Paris Effect”.

Hilton, the one who made it possible to be famous for doing nothing, was so sought-after in the early 2000s that you couldn’t get her to walk to her mailbox without giving her a check. Nightclubs began paying her to show up—in the hopes of stamping themselves with partyland pedigree for future customers. The real breakthrough came in 2005, when a Vegas club owner named Steve Davidovici started to routinely pay Hilton and her cohort outrageous sums just to walk through the door of PURE and Tangerine. In a blink, the transactional economy between nightclubs and celebs reversed direction.

So they paid her and her entourage just to show up to a club, have a few drinks, and (most likely) get photographed!? Wow. It’s no small wonder that the lesser the “celeb”, the more of an entourage they seem to have. I would want to latch-on to someone like hilton too if I thought it might earn me a “payday-by-association.”

While we all know that this practice is still going on, I think few of us “mere mortals” really understand just how much capital these night clubs (casinos, etc) are throwing at these D-list celebrities. GQ used another prime example – Scott Disick.

Disick is best known as the ex of Courtney Kardashian, and has been in the press quite a bit of late for his substance abuse issues, particularly with alcohol. Word is that at present, thankfully Disick is sober, but according to GQ, he is still very much on the rotation of many night clubs for paid appearances. To the tune of $70 to $80 thousand per appearance.

O, I did not get the number wrong. That is how much he gets just to show his face in a club. If we even just look beyond the general shadiness that, or of the club scene as a whole, and then of course ignore the sort of dubious ethics involved in paying a guy with a documented history of drug and alcohol abuse to make appearances at a place where he going to be surrounded by drugs and alcohol and therefore will be 1000 times more likely to relapse, you can see how such a lucrative practice has got all of our lower-tier (and even most of the upper-tier ones for that matter) jockeying for position over an easy payday.

However, according to GQ, that may be changing, and Paris Hilton is once again a good example of that. While the irony is that nowadays, Hilton actually kind of makes an actual living as a “DJ” – something that is probably more like having a real job (in her world) than anything else she’s ever “done” in her life. However, the world of fly-by-night celebrity is a fickle one, and word on the street is that gigs are getting harder and harder to come by.

In the past few years, the pecking order has shifted again: The ubiquity of  festivals and a general fatigue has weakened the draw of DJs and threatened to pop the EDM-DJ performance-fee bubble. Which has not only re-invigorated the market for a certain tier of reality stars but has also widened the lane for rappers. Hit records equal high fees, and predictably, superstars like Future and Drake and Nicki Minaj are the priciest names you can book today, whereas Paris Hilton now goes to Dubai to get the kind of paydays she used to get in Vegas. Apparently there are also different “tiers” of d-list celebrities, and an unspoken sliding pay scale to go along with it.

The most famous of these stars can score contracts at key times—like fight nights or New Year’s Eve in Vegas—that pay north of $200,000 for a 60-minute appearance.

Then there are the mid-tier earners, who command between $10K and $50K: the more notorious of Bravo’s Housewives, social-media celebutantes, on-the-rise rappers.

At the bottom of the food chain are the scroungers—your reality stars from such illustrious shows as Love & Hip Hop and Vanderpump Rules;  extended cast members who are scraping for a few thousand per appearance

So apparently it works like anything else in the entertainment world. When the public tires of an “oversaturated” d-list celebrity, said celebrity simply looks to Europe and the Middle East for a payday.

The U.S. market has nothing on Europe, and the European market has nothing on the Middle East, where you can earn five to ten times your price tag back home. Once your reality show is syndicated in a foreign market or your song becomes a hit overseas, you’re golden. And no matter how successful or how untouchably cool you are, you will show up at a club for the right price.

Sounds easy enough, doesn’t it? I guess you can’t really blame a d-lister for wanting to make hay while the sun shines. Nice work, if you can get it.