Saturday Night Live has become a huge part of our pop culture and has always managed to shed light on current issues, challenge controversial topics and make you laugh even during the darkest of times. None of this would be even remotely as wonderful without the help of their weekly celebrity host. We’ve gathered a list of the show’s 20 best hosts of all time for you in no particular order – because how could we truly pick a number 1? This list would never be complete without JT. A man of many talents, Justin Timberlake is a member of SNL‘s coveted Five-Timers Club. He’s been a staple to the show for the last decade and has been apart of some of the show’s most iconic moments. He has a natural talent for comedy and his connection with SNL alum Jimmy Fallon was pure magic. Skits like “The Barry Gibb Talk Show”, “Liquorville” and the digital short “D*ck in a Box” undoubtedly earns Justin a spot among the most best SNL hosts of all time.

Candice Bergen is without a doubt one of the most revered female hosts in the show’s history. She is one of two women to make it into the Five-Timers Club and  was the first female to ever host the show. She made her debut in 1975 and last hosted in 1990. One of her more memorable sketches was “The Right to Sheer Stupidity.” Candice is a true SNL classic and will always be among the show’s best hosts. 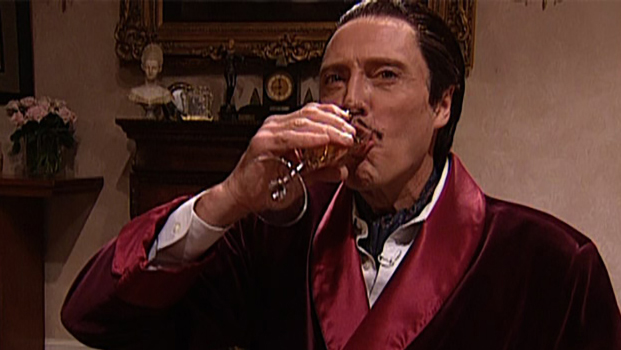 It’s hard to even articulate how awesome Christopher Walken’s contributions to Saturday Night Live have been. He’s hosted the show seven times, with one of his most notable appearances playing Bruce Dickinson, the music producer who wanted “more cowbell” from the Blue Oyster Club. He can also be remembered by the recurring “The Continental” and the “Meet the Family sketch”. His deadpan is comedy gold and we’ll always be wanting more “chamPAGNE”. 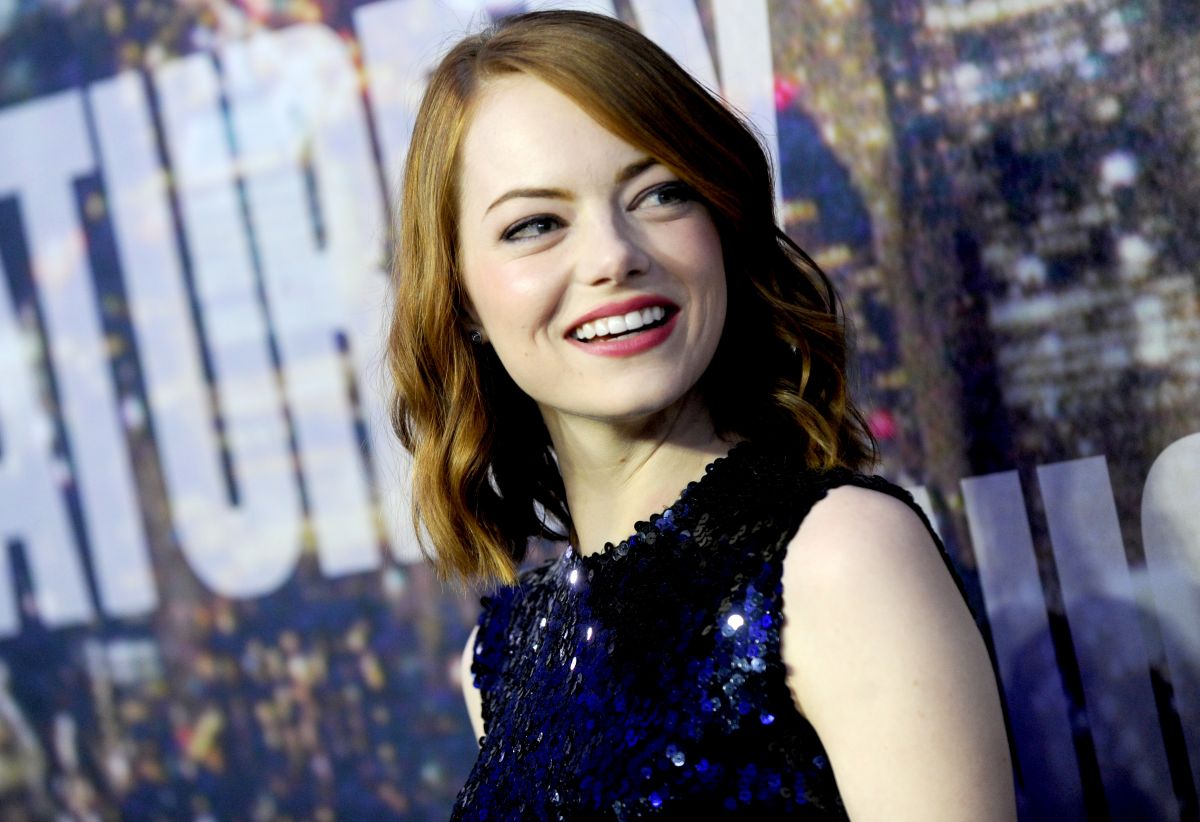 While actress Emma Stone may have only filled the hosting shoes twice, once in 2010 and again in 2011, one cannot deny her natural ability to take command of the stage. She’s got a fantastic comedic edge and she’s made several cameos on the show following her last time hosting. Some of her best skits include “Someone Like You” and “Bridal Shower Gifts”. 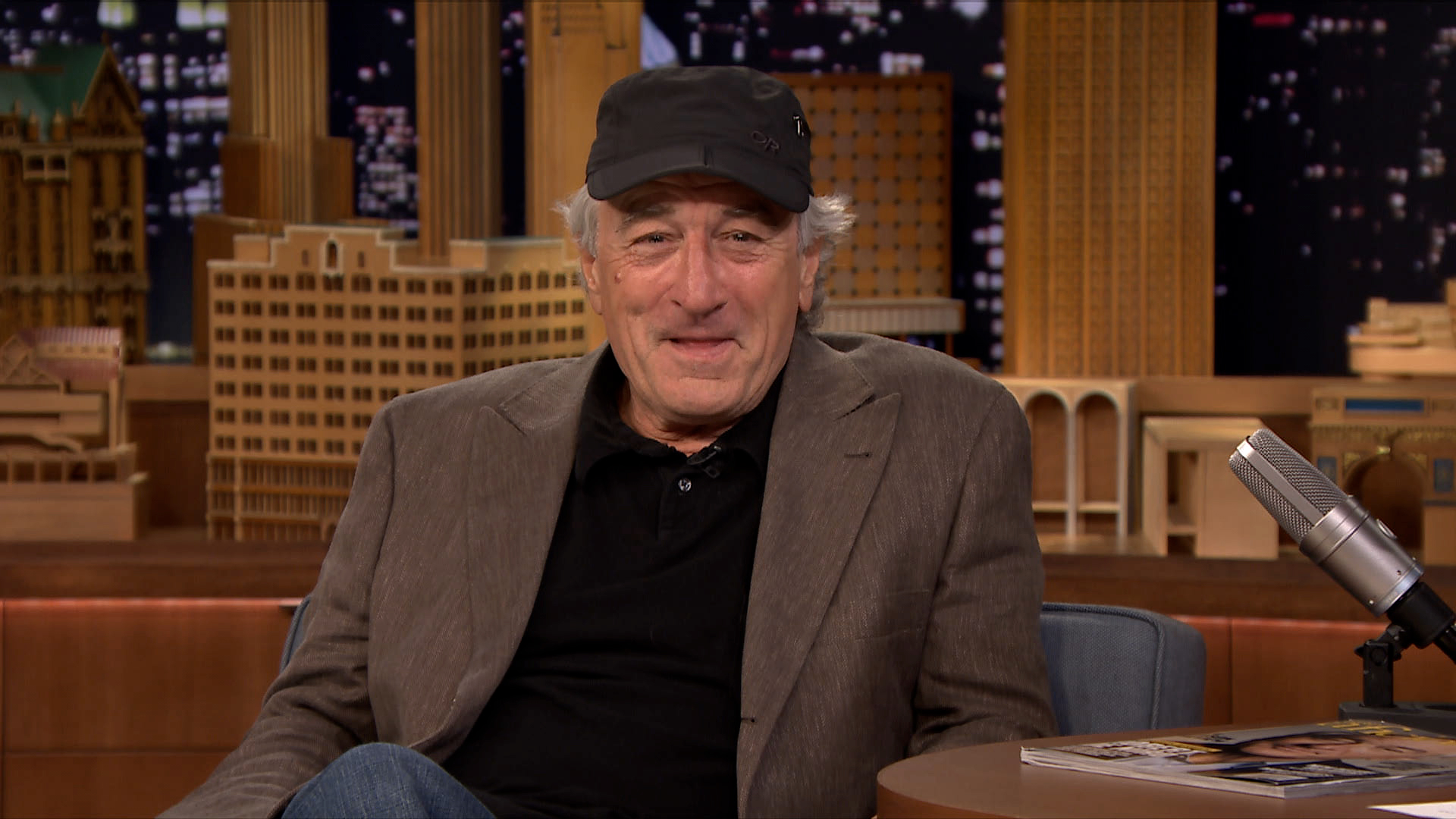 Legendary actor Robert De Niro has graced the SNL stage three times, making his debut in 2002 and hosting again in 2004, and later 2010. Prior to this, he had made several cameos on the show before finally agreeing to host. His most memorable skit was likely the “Homeland Security” sketch in which he announced a list of suspected terrorists including names such as “Graabir Boubi” and “Haid D’Salaami”. Somehow, he managed to do it without even cracking a smile. 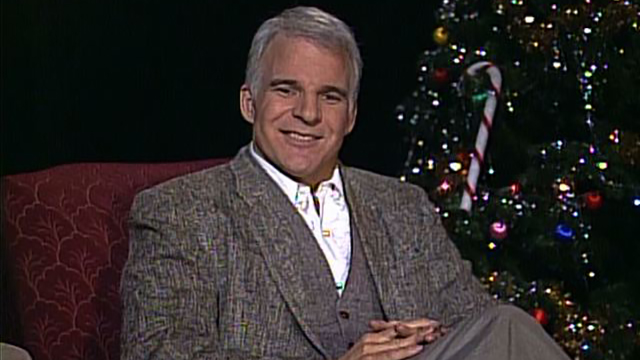 Steve Martin is often regarded as the best host of Saturday Night Live in all of the show’s history. Steve has hosted the show a whopping 15 times, coming just behind his comedy rival Alec Baldwin who has hosted 16 times. Not only has Martin hosted a gazillion times, but he’s also made 27 guest appearances. Some of his most memorable sketches were “King Tut” and “Theatre Stories”. It’s hard to find anyone more lovable than Golden Girls star Betty White. In 2010, a Facebook petition prompted NBC to invite White to host the show — and Betty brought the house down. At the age of 88 years old, she brought in the highest ratings the show had seen in over a year. Lorne Michaels brought in the big guns with old-timers like Rachel Dratch, Molly Shannon, Maya Rudolph, Tina Fey, Amy Poehler and Ana Gasteyer. Betty’s natural comedic spark landed the episode with seven Emmy Award nominations. 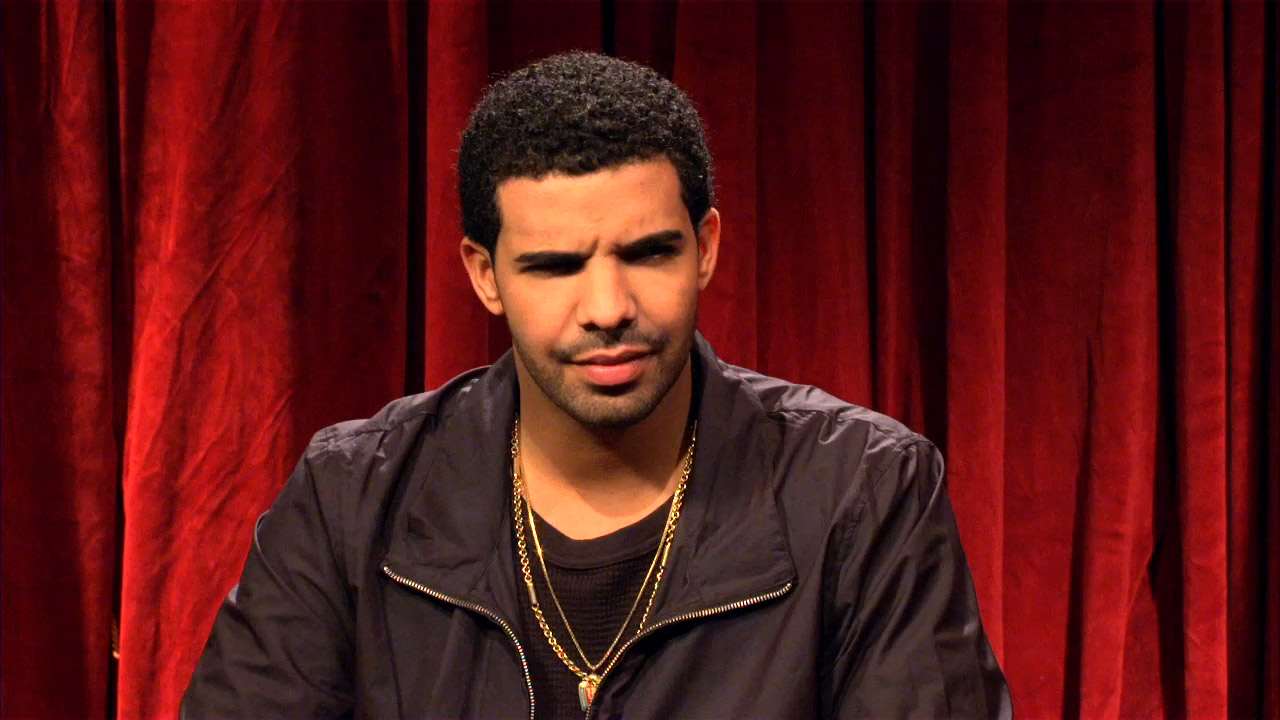 Though he may have only hosted the show once to date, Drake’s SNL  stint was a huge hit. He hosted the show on January 18, 2014 and started the show off right with a flashback to his bar mitzvah during the opening monologue. Skits such as “Rahat and the Indiana Jones Stunt Spectacular” and Drake’s impression of Alex Rodriguez sent viewers into a tizzy. We can only hope that he’ll make another appearance in the near future. Alec Baldwin hosted for the first in 1990 and has recently broken the record for the most times hosting the show, with 16 episodes under his belt. Over a quarter of a century, Baldwin has lended himself to countless memorable skits such as “Schwetty Balls” and has impersonated stars like Tony Bennett, Robert De Niro and Marlon Brando. Are we greedy for wanting more Baldwin? Between 1976 and 1980, actor Buck Henry had managed to the host the show ten times. He made quite the legacy for himself with memorable characters like the ever-so-creepy Uncle Roy and Howard the Stunt Coordinator. He was also known for his impersonations of celebrities like John Dean and Charles Lindbergh. 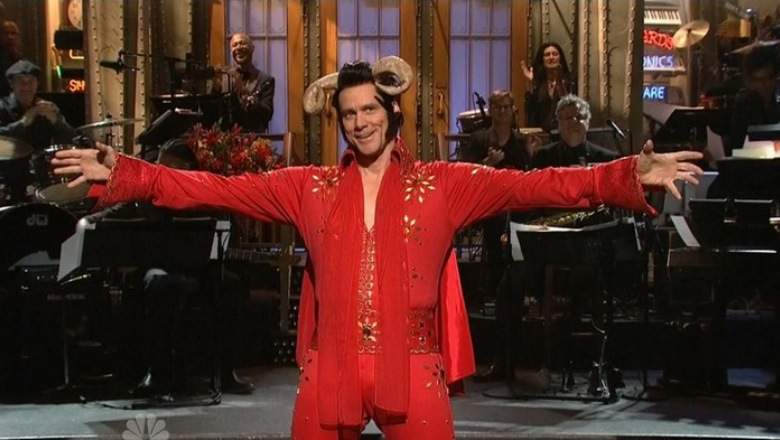 While he may have gotten his start on In Living Color, Jim Carrey was also a prominent figure on Saturday Night Live. Carrey first hosted the show in 1996, with his most recent stint airing in October 2014. He made an epic appearance in the recurring sketch “The Roxbury Guys” and downright nailed his recent impression of Matthew McConaughey’s Lincoln commercials. 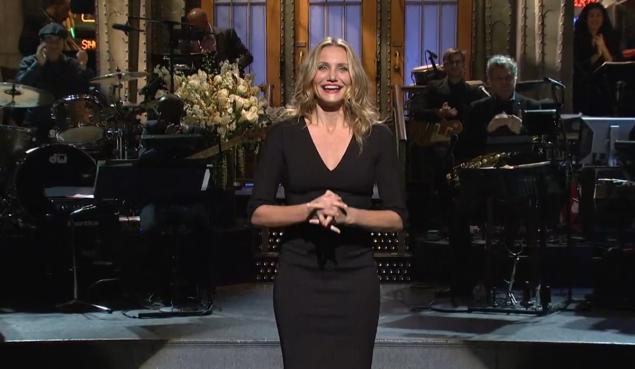 Cameron Diaz has hosted the show four times, with her most recent appearance being made in November 2014. Cameron has a penchant for letting loose and allowing her comedic talent to shine. One of her most recent sketch hits was the “Back Home Ballers” where she and her trashy girl gang sang about going home for the holidays and letting their parents cater to them. John Goodman is yet another beloved SNL veteran having hosted the sketch show 13 times. He first hosted in 1989, with his last appearance being made in 2013. Throughout the years, he made many cameos. Audiences loved his willingness to do any and everything for the laugh and he can be remembered for hilariously playing Linda Tripp in 1998 during the Monica Lewinsky scandal. He’s also known for his Robert De Niro and Elvis Presley impressions. Having hosted Saturday Night Live once in 1975, Richard Pryor was the first African American host to grace the SNL stage. His contribution led to discussions across the nation after the “Word Association” skit satirically challenged racial stereotypes. Though it sparked controversy, the skit was an important part in contributing to SNL‘s reputation for tackling tough topics and asserting their progressive values. 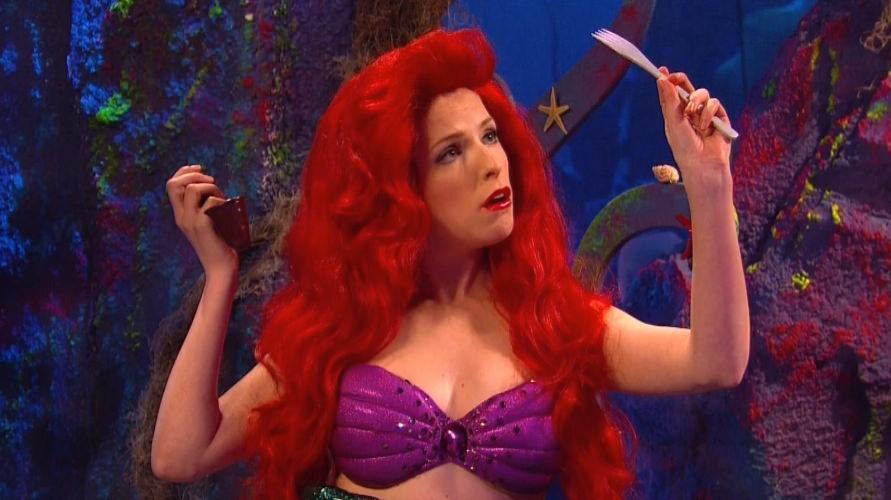 We challenge you to find something that Anna Kendrick can’t do. The actress/singer lit up the SNL stage like a natural in April of 2014 and was an instant hit. One of the highlights of the night was Kendrick’s Princess Ariel impression. In the skit, she wants to trade in her singing voice for a pair of legs. It all backfires when Ursula realizes Ariel has been tainted by mainstream pop culture and can’t sing anything other than trashy pop songs. Mad Men star Jon Hamm is surprisingly hilarious! He has hosted Saturday Night Live three times: once in 2008 and then twice more in 2010. His ease onstage coupled with his charm made him an instant fan favorite. In his first appearance, he satirized his Mad Men character Don Draper’s knack for picking up women. He has since made several cameos in Digital Shorts and skits. Drew Barrymore is the second woman to hop aboard the Five-Timers train with a total of 6 hosting appearances. Her first was in 1982 at the age of 7 years old, making her the youngest person to ever host the show. Her last hosting gig came in 2009 where she delivered yet another stellar live performance. Her happy-go-lucky willingness to squeeze out some laughs makes her one of our favorite SNL hosts of all time. 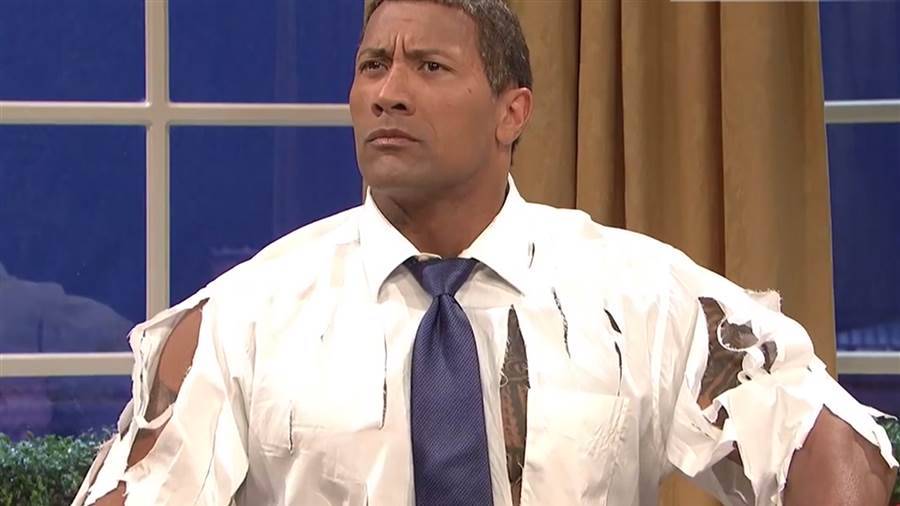 Dwayne “The Rock” Johnson has hit the SNL stage 4 times, and has always delivered on his hosting duties. In 2009, he put forth his most-loved skit to date: “The Rock Obama”. His hulk-like delivery of an angry President Obama was such a hit that it made a return when The Rock hosted the show again in March of 2015. How I Met Your Mother star Neil Patrick Harris has hosted Saturday Night Live only once but continued to show how much of a natural he is at live performances. There’s a reason this guy has hosted so many award shows! He made his hosting debut in January of 2009 and sent the audience rolling with his Doogie Howser Theme Digital Short. His skits “Fran & Freba” and “Frost/Other People” were big hits as well. 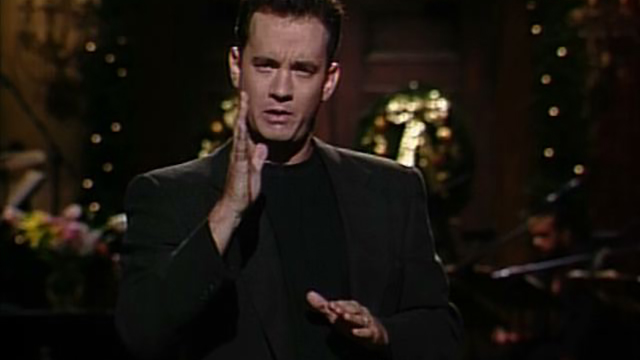 To be fair, when is Tom Hanks not side-splittingly funny? The Oscar-winning actor has hosted 8 times, debuting in 1985. He last hosted in 2006 and has popped up in some cameos since then. He frequented the “Celebrity Jeopardy” skits and has busted out some brilliant Randy Travis and Michael Caine impressions. One of his most memorable moments has been his “Mr. Short-Term Memory” skit where he played an ultra-forgetful game show contestant.