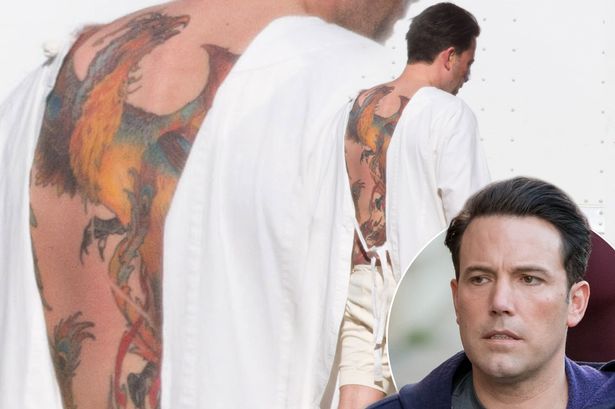 In what fellow gossip magazine D-listed called “a midlife crisis on Monster energy drink-infused roads”, it appears Ben Affleck has taken his nanny-humping, drinking-and-gambling, relationship-ending ways and translated them into a piece of wearable “art”. Affleck, who is only 43 (which is one year younger then myself and therefore waaaaay too young for a midlife crisis), has apparently gotten a giant tattoo of a Phoenix rising from the ashes. How original.

Apparently Affleck was on set filming scenes for his project “Live by Night” when the paparazzi snapped him walking back to his trailer (still in costume), revealing the Phoenix tattoo. Sources…or perhaps I should say “sources”, tell Us Magazine that the tattoo is indeed real.

And the telling body art — the phoenix, of course, is a mythological creature and a symbol of rebirth and reinvention — is the real deal, a source confirms to Us Weekly

So glad they explained the mythology to us. Really, is there anyone alive who has not heard the myth of the phoenix rising from the ashes? Nope, didn’t think so.

Why is everyone giving Affleck such a hard time for this tattoo? I suppose it’s just too much of a cliché to give him a pass on this one. At the very least he could have chosen a more original symbol of rebirth, like a hawk, the moon…or better yet, Uranus. He could have gotten Uranus tattooed on his anus. Now that would have been original. That would have been something we could respect.

But don’t take it from me. I’m not using the “royal we” for nothing. There are others. Many, many others who have been scratching their heads and then trying to come up with their own theories as to why.

That’s the kind of tattoo you get when you’re a newly single 40-something dude and you pull up to a tattoo shop in a yellow sports car with your 20-something girlfriend. You don’t even have to say anything to the tattoo artist. They know that you want the midlife crisis special and they also know that you’re probably going to come back in later to get something pierced, so they give you a coupon for that.  – D-listed

But perhaps the best reaction was reserved (rightly so) for Affleck’s ex-wive Jennifer Garner. This was her reaction.

You know what we would say in my hometown about that? ‘Bless his heart.” A phoenix rising from the ashes. Am I the ashes in this scenario? I take umbrage. I refuse to be the ashes.

Yep. You’re the ashes Jennifer. And I simply must give her full marks for the “bless his heart.” In America’s southern states, that is code for “WTF!?”

And it didn’t end there. the media, hell-bent on asking every singly person who had ever had a relationship with Affleck about the tattoo, also asked Jennifer Lopez what she thought of Affleck’s phoenix! Wow! J-Lo. That’s going back a ways – back to the Bennifer days. However, her reaction was just as priceless.

J Lo, while sharing the same opinion that the rest of us have about the overall feasibility of this tattoo, has actually drawn upon her skills as a judge on American Idol to offer-up some constructive criticism about the piece – too many colours. And you know what? She’s right. While it may seem like an excellent idea to get all of the reds and oranges of the fiery Phoenix depicted by rote, actually, red dyes are notoriously quick to dade, and even when they don’t, they tend to make the wearer look like they have some kind of contagious skin condition. Eew.

Other “sources” have been leaking little odds and ends here and there as well. One quote originally attributed to US Weekly (although now the Daily Mail has aggregated it) leaked this little nugget to the press.

Jen knows about it but feels like it’s not her problem.

Probably because it isn’t her problem. Not any more.