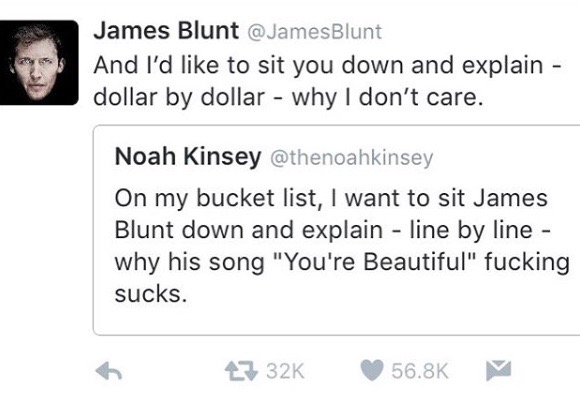 While entertaining, this brief Twitter exchange between James Blunt and what can only be described as a bit of randomly-generated bitterness by Noah Kinsey falls into the category of what I would call Mild to Barely-There Twitter Shade. However, as you well know, Twitter is the place where celebrities go  air their grievances, and it is never short on some pretty spectacular examples of celebrity name-calling, hair-pulling, eye-scratching..whatever you want to call the aspersions that celebrities cast at each other in 140 characters or less.  And let me tell you, there have been some real belters in the history of Twitter. Far too many to name really, but there are still those that stand out from the pack. So without further ado, I bring you three epic celebrity Twitter battles that you may have missed.

To me, the Perez Hilton vs. will.i.am battle that ended up on Twitter is sort of the defining celebrity spat of the modern millennium. Not because it’s a clever sparing

of verbal fisticuffs – clearly it’s not, but more because of how it all played-out. The dispute between Hilton and will.i.am started live and in person in 2009 at the SoHo Met Hotel in Toronto, presumably where both will.i.am and Hilton were enjoying a night out. Apparently the two got into a verbal altercation at some point, and Hilton apparently called will.i.am a “faggot”. This was an especially unfortunate choice of words, as was later pointed out by spokespeople for the LGBT community, as Hilton himself identifies as homosexual. It was also a poor choice of words based on the fact that Hilton subsequently got his ass kicked by will.i.am and his security team. Bleeding from his cuts and bruises, Hilton did what anyone who has just been assaulted on a city street by a gang of men would do – he took to Twitter, asking his audience at large (or someone…anyone) to get the Toronto police to the scene. Apparently 911 must have been too many digits to remember, or perhaps Hilton was mildly concussed, but whatever the case may have been, Hilton was all over Twitter allowing his unfortunate situation to be broadcasted all over the world (in 140 characters or less at a time). Will.i.am responded with the following.

Dude, apparently you were bleeding outside the club. I was, like, next to you by a tree. I was waiting for my car. And instead of calling the police, you [Tweeted] that I assaulted you. Sounds like somebody wants mad attention and is not really concerned with his health.

I didn’t hit you. And this is very wrong that you are [Tweeting] that I did that, once again disrespecting me and everything that I stand for. And they’re lies. And that’s wrong. Shame on you. Shame on your behavior

No. 2: Katie Hopkins vs. Lily Allen In case you’ve never heard of Katie Hopkins (you lucky devil, you), she was originally a contestant on the British version of TV’s The Apprentice back in 2007. Since then, she has been offending audiences as a television presenter and sticking her (large) foot in her mouth with a surprising combination of speed and accuracy. On everything from the current state of politics to the weight of your firstborn, you can expect Katie Hopkins to have an overly-inflated opinion. Really, this item should have been titled “Katie Hopkins vs. The Universe” – that would have been more apt. However, in a sick way, that is exactly why she makes for such good Twittertainment value; the woman will pick a fight with just about anybody. She picked one such fight with Lily Allen shortly after the birth of Allen’s second daughter. About Allen’s career, she said this.

I quite liked her when she was singing and kind of interesting and then she went off to tell us all about being a mother. She was removing herself from the spotlight because she wanted to be a mother and that largely involved gaining two stone and looking pretty hideous.

Allen was not having any of it. She responded in a series of Twitter installations, which she later deleted, but not before she had her say (and the internet made it permanent). No. 3: Donald Trump vs. Danny Zuker

Danny Zuker is a writer and producer, who is the driving force behind the hit Television series Modern Family. His Twitter feed is one mic-dropping takedown after another, as one might expect from a writer who has come away with five Emmys in a row in its first five years. One of his best-ever takedowns was of the Tangerine Orangutan himself, Republican presidential nominee Donald Trump.

Apparently one day, ostensibly in-between writing and producing Modern Family, Zuker just happened to be playing with his Twitter feed at an opportune moment; he discovered Trump mid-Twitter tirade. However, not too much time must have passed before Zuker just couldn’t take it any more. He felt compelled to respond. The takeaway message here? Never get into a verbal fisticuffs with someone who is a professional comedy writer.